With Professor Stein’s life on the line, Tuesday’s Flash found Barry and Co. scrambling to find a suitable replacement partner (R.I.P., Ronnie!) for the bespectacled smartypants — and, oh, what a replacement they found.

They initially tried to merge Stein with (literal) hot-head Dr. Henry Hewitt, but any viewer with an active Twitter account knew that partnership wasn’t meant to be. Enter Jefferson “Jax” Jackson, a high school football player-turned-mechanic whose disdain for the particle accelerator is matched only by his (alleged) appreciation for the Titanic soundtrack — a one-liner I’m sure Professor Stein enjoyed.

It wasn’t until Hewitt’s troublemaking nature was revealed that Jax began to warm up (sorry!) to the idea of becoming Firestorm, resulting in an epic fire-on-fire melee at the Central City High School football field, coincidentally the exact location where Jax was originally hit by the accelerator a few years earlier.

With Hewitt out of the way and Firestorm finally restored to its (their?) former glory, Professor Stein said his goodbyes to Team S.T.A.R. Labs, passing along this foreboding bit of advice to Cisco: “The very thing that makes you different is what makes you special.” (I. Can’t. Wait. For. VIBE.) 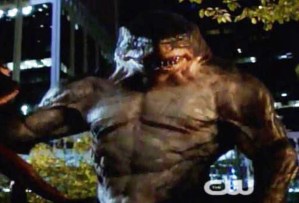 DEAD MAN WALKING | As if doing battle with a fiery lunatic and helping an old friend merge with a total stranger wasn’t hectic enough, Barry received his biggest shock in the episode’s final moments: a talking shark named, what else, King Shark, wants him dead! Actually, wait, that wasn’t the biggest shock — Barry came face-to-face with Earth-2’s Harrison freakin’ Wells! (But really, though, I’m going to need to take several moments to process that talking shark.)

DROPPING A MOM-SHELL | If you were hoping Iris’ long-overdue meeting with her mother would be all sunshine and rainbows, you were probably pretty disappointed by what transpired. Not only does she want nothing to do with her mother — who revealed she’s dying of MacGregor’s Syndrome, the same ailment plaguing the Clock King and Mr. Freeze’s wife — but Iris also learned that she might (does) also have a brother (named Wally) out there somewhere; her mother apparently gave birth a year after walking out on Iris and Joe. (Did you know Iris is an investigative reporter? One who uncovers things? Just ask her, I’m sure she’ll be happy to remind you.)

Flash fans, are you feeling the new Firestorm? Rooting for Barry to get with Iris/Patty? Totally, completely in love with King Shark? Whatever you’re feeling after this week’s episode, drop it in a comment below.