The results are in for Oliver Queen’s mayoral run — at least among his inner circle.

His friends and family will finally weigh in on this Wednesday’s Arrow (The CW, 8/7c) — two weeks after Oliver declared his political intentions to Felicity.

“It’s actually very atypical for our show to announce something, and then just leave it dormant for an episode, which we did this week because so many other things were going on,” star Stephen Amell explains during a recent visit to the show’s Vancouver set.

So how will his loved ones take the news? “They’re slightly incredulous,” the actor teases. “Everyone has their various reactions.” One thing is certain: His girlfriend Felicity is encouraging — even though she looked slightly apprehensive at the end of Episode 2. 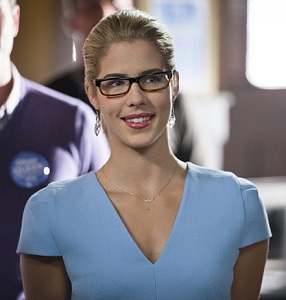 “The first moment was like, ‘Ohhhkay, honey, maybe we should talk about that,'” her protrayer Emily Bett Rickards describes. “And then there’s this unbound support that they have for each other. It’s this idea of, ‘We can do anything even though it’s dangerous. This is what we have signed up for and this is going to be our life. Therefore, we will try this new idea you have, and I’m there to support you unconditionally.”

In fact, the campaign “galvanizes their relationship,” Amell adds.

And it’s not the only dynamic in Oliver’s life that will be affected by his big decision. “It actually works well for his relationship with Thea, too, because she becomes involved in his campaign,” Amell previews.

As for the man who unintentionally pushed Oliver to step into the light, well, that response is a little more complicated. “Oliver actually says, ‘I gotta talk to Lance,’ to which Laurel responds, ‘Ehhh, maybe don’t bring that up with him,'” Amell reveals. “I’m just like, ‘Well, we need the SCDP.’ So it’s an Oliver Queen that has to work with people and it’s exciting.”

Adds Paul Blackthorne, who plays the Captain: “There was a great scene which occurs between myself and Stephen, which pertains to some of the reasons why Oliver was running for mayor and trying to prove something to Lance by doing that. [It] really took Lance by surprise and was a nice little nuance in the scene… As we’ve been doing these episodes, I was feeling like Lance has this fatherly pride that [Oliver] is actually stepping into the light and doing it for real now.”

But not everyone is on board with Star City getting a new mayor. With the elder Queen making a play for office, “it allows us to begin to establish an interesting dynamic between Oliver and Damien Darhk,” in addition to the one between Green Arrow and the baddie, Amell describes. “As we saw in the second episode this year, Darhk does not react too kindly to people running for mayor. He doesn’t want anyone to be mayor. He doesn’t want any galvanizing force or goodness in the city. So this puts everyone at odds.”

For Amell, his character’s political journey in Season 4 “has been something that I’ve very much enjoyed,” he says.

“There are two aspects of Oliver’s character this year — well, actually, probably three,” the actor continues. “He’s a different type of person out in the field. He’s a different type of person in the political arena. And then there’s a third storyline we’re going to explore in the first third of the year that’s also different. So being almost 80 episodes into a show, it’s exciting to play different things. And I like Oliver the politician, and I also like anytime we can do something that weaves naturally into the canon of the Green Arrow characters.”