“We’re inseparable…. We were.”

Being flung to a far-off planet opened up a whole new world for Agents of S.H.I.E.L.D.‘s Jemma Simmons, as vividly detailed by the ABC series this Tuesday.

A WHOLE NEW WORLD | In the episode “4,722 Hours” — as in the duration of Jemma’s trip — the bio-chemist related to colleague and best friend Fitz what exactly “happened” to her during her time on the planet. The engrossing tale was presented as a 42-minute-long flashback sequence, starting with Simmons being spat out by the portal onto the alien terrain. At first, the savvy scientist kept a clear head and approached the odyssey as the ultimate field study, intermittently recording her experiences for Fitz, whom she trusted (hoped?) to one day, some way come for her.

The final S.H.I.E.L.D. agent to prove to us her physical mettle, Jemma not surprisingly impressed as she improvised, sustaining brutal sandstorms and turning her near-death in a shallow pool into a feeding frenzy for her ravenous self. (“You’re dinner, biatch!”) So resilient was she as she found means to survive, all while awaiting (possible) rescue, you sensed she could tough it out all by her lonesome.

Only she wouldn’t have to.

WE ARE NOT ALONE | One day whilst navigating a series of reeds, Jemma slipped down through a hole, into a cave. There, she was locked up in a crude cage and fed suspect gruel. Eventually she would make a break for it, getting the drop on her human captor and fleeing out into the strange tundra. But after tumbling down a rocky slope, gashing her shin, she was carried back to the cave and properly introduced — to Will.

Will (played by Nikita‘s Dillon Casey) was an astronaut for NASA, which in 2001 sent a team of four through a portal to this planet located outside our solar system. The plan was for NASA to one day find means to retrieve the crew, but that never happened. Instead, Will’s comrades reportedly went mad after they one by one braved the “no-fly zone” — a graveyard of sorts for other otherworldly travelers — that is lorded over by a mysterious and ominous cloaked being.

Having unearthed a sextant in the “no-fly zone,” Jemma set out to map the new solar system and in turn calculate when next the portal might appear, using the last bars of her Fitz-ified cell phone to power Will’s old-school computer. She eventually concluded that in 18 days, they would need to arrive at a far-away gully — and it was Will’s job to devise a way to traverse the small chasm once they got there. But upon making the actual, time-sensitive trek, they found more of a small canyon than gully. Will attempted to shoot the “message in a bottle” that Jemma prepared as a “Hail Mary” into the closing portal, only to see the vessel shatter on the other side, having landed a millisecond too late.

FITZ IS COT-BLOCKED! | Sapped of the hope that had kept them afloat, Jemma and Will returned to the cave devastated — “This isn’t home; this is hell,” Jemma sobs — and then found themselves in each others’ arms, passionately amplifying the bond that had formed. 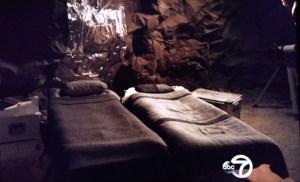 As seven weeks passed, the glimpse of their two cots pushed together as one and a “Good morning” kiss  affirmed that their relationship had indeed progressed. But it was during a “picnic” of sorts, where they hoped to catch sight of a sliver of sun, that Jemma spied the flare Fitz had fired from the other side. To get to the flare’s origin, Jemma would brave a sandstorm and risk the cloaked figure’s wrath, but she persevered, with Will right behind her.  Jemma briefly lost Will in the storm, but kept marching toward Fitz’s voice, ultimately finding his hand and getting pulled back home, though alone.

We then finally leave the planet and return to the Bus where Jemma has been relating her saga to Fitz — who quite apparently was not anticipating at least one of its twists. “I never would have survived with him,” she makes clear. Fitz walks away, and Jemma follows, praying that he can look past the why and proceed to help her get back to the planet.

It is then that Fitz proved the upright individual he is, how his love for Jemma and her desires supersedes his own wishes — as he reveals his research into a way to make the portal anew: “We’re going to get him back.” Then, in the coda, we see that Will did survive the sandstorm/the being, as that sliver of sun slipped away.