“Earth doesn’t have just one hero anymore. Now, it has Supergirl.”

You’ve watched the commercials. You’ve seen the billboards and bus-stop posters in your neighborhood. You’ve even gotten Rachel Platten’s “Fight Song” stuck in your head for no apparent reason. (All together now: “Like a small boat, on the ocean…”)

Now, after months of marketing, the highly anticipated Supergirl premiere has arrived — and we want your thoughts on the CBS drama’s debut. But first, a recap of what went down in the first hour:

As Kara Zor-El succinctly tells us in the episode’s opening minutes, she was sent to Earth as a young girl to protect her cousin, Kal-El, after their home planet Krypton found itself in peril. But during her intergalactic journey, Kara was knocked off course into The Phantom Zone — a mysterious area of space where time does not pass. By the time she made her way out and reached Earth, Kara was still a young girl, but Kal-El had already surpassed her in age and begun his crime-fighting career as Superman. And even though Kara was taken in by the Danvers family (including their daughter, Alex), her sole reason for coming to Earth didn’t actually exist anymore. (Talk about an identity crisis.)

When we meet present-day Kara (played by Glee‘s Melissa Benoist), she’s comfortably settled into Plan B: Blend in with the rest of society and pretend you don’t have the ability to fly/see through walls/burn objects to ash just by staring at them. She works at CatCo World Media, an online and print empire founded by Cat Grant (Ally McBeal‘s Calista Flockhart), who would have fit in quite nicely at those icy offices in The Devil Wears Prada. A quick rundown of the workplace dynamics: Kara is Cat’s assistant (and is therefore insulted at least four times per conversation); IT whiz Winn Schott (Smash‘s Jeremy Jordan) carries a major torch for Kara; and it takes Kara about .02 seconds to develop a mega-crush on photographer James Olsen (Desperate Housewives‘ Mehcad Brooks), who used to work at The Daily Planet and won a Pulitzer for his snazzy snapshot of Superman in flight. 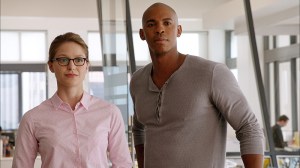 It quickly becomes clear that Kara isn’t content to just fit in with the Average Joes of the world, after all. She wants to embrace her powers for real, and she gets the chance to do so when a plane to Geneva — a plane that her sister (Grey’s Anatomy‘s Chyler Leigh) just happens to be on — starts losing altitude over National City. Without thinking twice, Kara takes flight, literally puts the plane on her shoulders and safely guides it into the water. (Sorry, Capt. Sullenberger. You’ve got nothing on Supergirl.)

Despite having her life saved, Alex is none too pleased that Kara exposed who she really is, and she’s confident that Kara’s superpowers will make her a target for the bad guys. (Spoiler alert: She’s right. But more on that in a second.) In the meantime, Kara is practically bursting to tell someone else about Her Big Secret, and she decides to spill the beans to Winn at work the next day. (HER: “For most of my life, I’ve run from it. But last night, I embraced who I really am, and I don’t want to stop.” HIM: “Oh my God, you’re a lesbian.”)

At first, it’s smooth sailing for Kara (who has since been labeled “Supergirl” by Cat, once the heroic plane rescue started making headlines). With some assistance from Winn, she’s able to conquer a car chase, stop a bank robbery and find herself a fashionable-but-functional crime-fighting costume all in the same day. (Might as well add “efficient work ethic” to her list of superpowers.)

But it isn’t long before Alex’s ominous warning comes to fruition. Remember that Phantom Zone I mentioned earlier? Well, when Kara escaped from it all those years ago on her journey through space, she also set free the alien prison Fort Rozz and all of its inhabitants, who are now wreaking havoc on Earth. One baddie in particular, Vartox, wants badly to end Kara’s life, seeing as Kara’s birth mother was responsible for imprisoning him at Fort Rozz in the first place. Oops.

Before Vartox can get to Kara, though, she’s taken in by the Department of Extra-Normal Operations (DEO), a covert government agency whose sole responsibility is to keep the existence of aliens a secret from humans. (Oh, and did I mention Alex works for the DEO, and she’s trying to stop Kara from embracing the whole Supergirl thing so that Earth can remain safe? Yeah, that causes some family tension.)

To make a long story short, Alex comes around at the end of the episode, and she persuades DEO Director Hank Henshaw (Homeland‘s David Harewood) to do the same. Instead of considering Kara a threat to society, the DEO (cautiously) agrees to work with Kara, who can ideally stop Vartox and all of the other dangerous Fort Rozz prisoners. Thanks to some serious heat vision, she indeed defeats Vartox — and, at the end of the hour, she gains another confidant in James, who has actually known about Kara’s true identity all along. (Turns out he was asked by Superman to keep a close eye on Kara at CatCo, and everyone just pretends like being BFFs with Superman isn’t a huge deal.)

In the episode’s final moments, though, we learn that Kara is far from out of the woods. Her birth mother, Alura Zor-El, has a literal evil twin sister — named The General — who oversees Fort Rozz. When The General gets word that Kara is using her powers to defeat alien prisoners, she has one simple request for her henchman: “Find her and kill her.” So… there’s that.

OK, your turn. Did Supergirl‘s much-buzzed-about debut live up to your expectations? Check out a new trailer below, then grade the premiere in our poll and hit the comments to back up your choice!