Minority Report goes on an island adventure in tonight’s episode (Fox, 9/8c) when precog Agatha experiences a murder vision that brings her brothers, Dash and Arthur, as well as Detective Vega, to the sleepy nook of Fiddler’s Neck.

“We’re going to see how the other half lives with Agatha,” executive producer Max Borenstein previews during a recent set visit. “We learn a lot about how you can live in this society off the grid.” 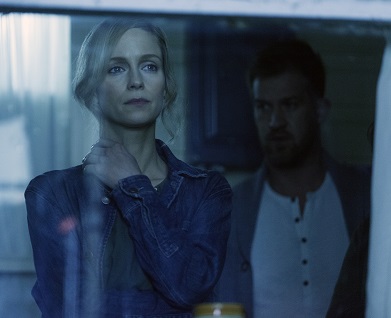 The hour also offers a glimpse into the days when Agatha “arrived on that island and her first attempts to forge relationships with other people aside from her two brothers,” her portrayer Laura Regan describes. “It goes into Agatha the woman versus Agatha the precog. She met a man and fell in love and it couldn’t be what he wanted it to be and it couldn’t be what she wanted it to be because of who she is. It explains to some extent who she has become now — a slightly more tough character. You get to see a softer Agatha in the early days.”

Meanwhile, Vega’s presence throws a wrench into the trio’s family reunion. “There’s obviously a great deal of tension because [Agatha] has foreseen that Vega’s going to play some role in getting the three of them caught,” the EP explains. “So she’s not exactly thrilled to have this person in her little sanctuary.”

Although Agatha’s vision is pretty damning, Vega “wants to give her the benefit of the doubt,” star Meagan Good says. “It bothers her that Agatha saw this vision. She knows she feels like she could never do that.” However, the detective starts to wonder, “‘Maybe I don’t know something? What if it’s the minority report? What if it’s the one you have wrong?'”

But the true purpose of the trip to Fiddler’s Neck is actually about saving time behind-the-scenes. “We needed an episode with zero special effects because we’re so behind on making the show,” star Stark Sands reveals. “The whole concept of the island is that they’re a bunch of Luddites, and there’s no technology allowed on the island. There’s no weapons allowed on the island. There’s no police force. It looks like 1970s. It’s a really cool concept, but the truth is we needed an episode where we could just be like, ‘We need to shoot it, and it’s done!’ instead of having two, three weeks of post-production.”

Speaking of being done, given the show’s shortened season order, one can’t help but wonder if the finale will also act as a fulfilling conclusion.

“Yeah, absolutely,” Borenstein assures us. “We always had this 10-episode arc in mind because we were always airing 10 episodes [this fall]. We have a really cool, satisfying ending, and if we get to do a second season, we’ll pick it up from there. But if we don’t, it’ll be a great ending regardless. “