This Monday on Gotham (Fox, 8/7), Selina Kyle strives to help Bridgit Pike aka Firefly cope with her impetuous roasting of a GCPD officer, as well as get out from under her firebug brothers’ thumb. But is this mission too hot for Cat to handle?

This much is certain: The events of this week’s Selina-centric episode threaten to forever change what is already a highly tenuous connection between her and lawman Jim Gordon. “It is one of my favorites,” says Camren Bicondova, who plays Selina, “but I’m also excited for what future episodes bring.”

Here, the 16-year-old actress/dancer surveys the Cat/Firefly bond, teases a fierce face-off and weighs in on the slap heard ’round the Internet.

TVLINE | Is it safe to say we have only scratched the surface as far as Selina’s bond with Bridgit (played by Michelle Veintimilla)?
Definitely. They have a long history together.

TVLINE | Selina never really puts her neck on the line for anybody. What makes Bridgit different?
Well, Bridgit was one of Selina’s first friends, and I think Selina feels bad for her. She knows that Bridgit has the ability to be a very strong, independent girl, so she wants to help her become that. And Selina doesn’t like seeing anybody, especially a fellow girl, being treated badly — Selina is very passionate about that. She isn’t a very violent person, she doesn’t like being violent. 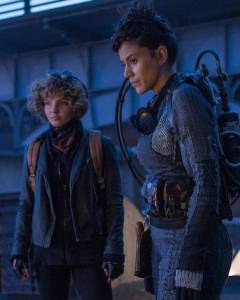 So when it comes to Bridgit, Selina wants to help her be able to live all on her own.

TVLINE | Selina obviously isn’t a “people person,” but would you say she is feeling as alone as ever? Not that she’d ever admit it.
I think so. She’s a teenage girl and even though she acts as if she doesn’t need anybody and she can do things on her own, everybody needs friendship. Whether it’s real friendship or if it’s just someone they can talk to and then brush off, everybody needs relationships. And she’s feeling that loss, especially with Alfred telling her not to talk to Bruce anymore. But Bridgit is helping with that. Bridgit kind of came into her life the moment that she was about to feel the ultimate loss, so I think Bridgit is helping her — as much as Selina is helping Bridgit.

TVLINE | You have a really fantastic scene in this episode opposite Ben McKenzie. Can you talk about that a bit without spoiling it?
Oh, thank you. Selina and Gordon make distinct promises to one another, and in this scene, Gordon gives Selina some very bad news and she gets really angry with him. She’s angry with herself also, because she knew that she shouldn’t have trusted him, a cop. She wishes that she had trusted her instincts. Basically, at the end of the scene you wonder if Gordon and Selina’s relationship still exists.

TVLINE | Does that leave Selina poised to take her darkest turn thus far?
Hmmm…. She definitely goes into a dark space, because at the end of the episode she… feels like she doesn’t have anybody to turn to. But I dont think she’ll go in a necessarily “evil” direction. I think she just needs to figure herself out again and remember what she taught Bridgit about being independent. It’s up to the writers and Im excited to see where they take it!

TVLINE | Now, the week before, did Alfred punch Cat or slap her? (Video above)
OK, Alfred slapped her — but in real life, he did not touch me. I want everybody to know, because people have been really mean to Sean [Pertwee]. No actresses were hurt in the making of that scene. It’s all good!

TVLINE | And storylinewise, you feel it was justified? [Alfred slapped Selina for her role in his Army friend Reggie’s death.]
Yes, I think it made sense. It creates complexity within their relationship, which always makes for good scenes. I dont think Alfred realizes that he and Selina are on the same page as far as what they want for Bruce. Instead, he just sees her as a street thief. I think that they’ll both come around, but it will take time. Like, with my cats, if I forget to feed them one time, they’ll be mad at me. But the moment I feed them they come around and they love me. I feel like it’s the same thing.

TVLINE | What can you tease 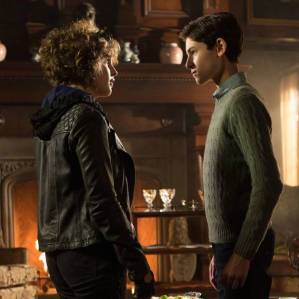 about whats next for Selina, Bruce and Theo Galavan’s niece, Silver St. Cloud?
At this point in time, I don’t know that Bruce knows Silver or that Silver even exists. But we do meet, eventually. Natalie [Alyn Lind], David [Mazouz] and I have a scene together in an upcoming episode, and while I dont want to say what happens, I will say it’s a little awkward! [Laughs]

TVLINE | Lastly, if I were to point our readers to some video of your professional dancing, which would you choose? The one you’re most proud of, or you yourself love watching….
[After much consideration and Googling] Well, there are three. The older one is Eve and Missy Elliot’s “Wanna Be,” and the choreography is by Nika Kljun and Ana Vodišek. [Warning: language] And then there’s 8 Flavahz’s “No Flex Zone” (embedded below) — that’s from when we were on hiatus. And lastly, there’s “Dedication,” which I dedicated to my father [in the Navy].
https://youtu.be/H63FdiiEKf8?t=23s