The “Who’s in the grave?” cliffhanger that capped Arrow‘s Season 4 premiere has the CW series’ cast playing conspiracy theorists as avidly as viewers.

Like the clue-collecting fans – and TVLine – “Everyone proves that it’s not, and everyone proves that it is [any given character],” the actress continues. “‘But then there’s this! And nobody can die because there’s the [Lazarus] Pit. And there’s time travel, and if we travel to The Flash, we’d just bring them back to life.'”

Even leading man Stephen Amell is not immune to the theorizing. “Well, of course, I have suspicions…,” he says (while sadly not sharing any). 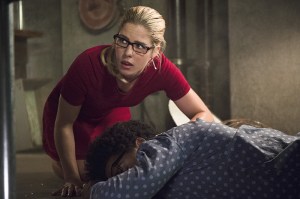 for the death is Felicity Smoak, but could the show really axe Oliver’s current love? “You can kill off anyone,” Amell replies. “Modern television has proven to us that you can literally kill off anyone.”

Captain Lance seems a more likely target, not that his portrayer Paul Blackthorne is worried about his odds of survival.

And should this prove 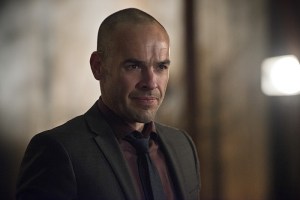 to be “his” year, Blackthorne believes he had a solid run. “I’m just thinking, ‘That’s four years in. Can’t complain, I’m very happy,'” he says. “If you’re propping up the daisies at the end of it, then so be it. But hopefully not. It’d be nice to keep going. It’s a nice show to work on.'”

Even though the mystery means the potential loss of a longtime cast member, the actors have nothing but praise for the twist. For Amell, the flash forward reveal was a welcome surprise because “there’s not one huge swerve in the first nine episodes, like there have been in almost the first three seasons,” he explains, noting that the early run of Season 4 nonetheless is “excellent.”

But reading the script for the premiere was “the only time that I was really cracked over the head,” he shares. “One of my favorite shows of all time is Lost, and my favorite episode ever is when they flash forward for the first time. So for us to do that … was very cool.”

Adds Rickards: “It’s good storytelling, and the flash forward was a really smart idea. They surprised me, and I like story for story, so I was happy to see that.”