A word of caution to longtime Parenthood fans: If you’re hoping to find traces of Julia Braverman in Erika Christensen‘s newest role, you’ll be searching for quite a while.

Aside from the fact that Christensen’s Wicked City alter ego, Betty Beaumont, has two kids, she has nothing in common with the lawyer-turned-stay-at-home-mom of NBC’s beloved dramedy — and Christensen is well aware of that.

“I definitely came to wrap my wits around the fact that Julia Braverman fans needed to be warned that Betty was very much different from her,” Christensen tells TVLine, adding with a laugh that she “definitely wanted to do something darker, and boy, did I get what I wished for.”

In the first season of Wicked City — which will be an anthology series, should it get renewed for a second go-round — Christensen’s Betty, a sociopathic nurse, teams up with manipulative murderer Kent (Gossip Girl‘s Ed Westwick) as they embark on a killing spree across the Sunset Strip in 1982 Los Angeles.

Ahead of the show’s Oct. 27 debut (ABC, 10/9c), TVLine caught up with Christensen about Betty’s tragic past, her complicated relationship with Kent and how the actress has responded to early criticism of the show’s violence against women.

TVLINE | There was almost zero time for you between the end of Parenthood and the start of Wicked City. Were you actively looking for another major TV role as Parenthood was winding down?
I actually was. I had fallen in love with doing television. I think it’s such an interesting medium, and I was ready to jump into something else and keep doing it. I’m only planning on doing a year [of Wicked City]. I don’t think that’s a spoiler. Ah! [Laughs]

TVLINE | Have there already been discussions about who would come back for a possible Season 2?
Yes, but only very casual rumors. 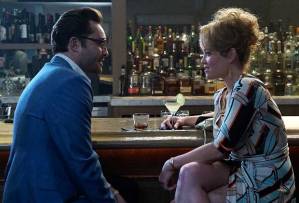 TVLINE | So many of your current TV fans know you as Julia Braverman, and Betty is such a departure from her. Were you ambivalent about taking on such a dark role?
At first, I was just excited. The black and white of it is Julia is such a good person, and she’s trying so hard, and Betty is so lost in the world. If I had to categorize her as a good person or a bad person, I wouldn’t necessarily categorize her as a good person. [Laughs] Even though, at first glance, she’s fairly innocuous with being a nurse and being a single mom and trying to make it all happen. But yes, [Julia and Betty] are definitely different. I am slightly concerned for the fans of Julia Braverman, but I’ll continue to warn them as it goes on.

TVLINE | We don’t see Betty as much as we see Kent in the pilot episode. Did you come up with a lot of your own backstory for her?
Yeah, absolutely. There’s a little window into that when she tells [Kent] that the father of her kid left her when she was pregnant with her second child. Basically, that was a very bad relationship, and any relationships that she had with men before that were also very bad. She really doesn’t have good taste in men up to this point, and she’s just been damaged. She’s been abused, verbally and physically, and has had a rough time with it. She’s tried to compensate and find self-value in other ways.

TVLINE | The commercials for Wicked City have focused a lot on Kent’s kinky interests. Is Betty going to become more and more attracted to his freaky side — even though she’s initially a little weirded out by it?
She’s so in — hook, line and sinker — as far as Kent and anything that he wants or anything that he does. She’s going to be willing to go wherever he wants to go. Obviously, sex is the first thing. It’s like, “OK! Kent wants to go new places! And Betty’s going to go with him!”

TVLINE | Might they eventually become equals in this Bonnie and Clyde-esque situation?
Certainly as of the end of the pilot episode, Kent is the leader, and will remain so for a while, for sure. Betty really has to wrap her wits around the situation that she’s getting into and come into her own, as far as making choices and owning the choices that she’s making.

TVLINE | The music of 1982 plays a big role in the series premiere, as do the nightclubs. Will it continue to be integral to the story?
It’s timeless music. We know all the music now, and even still listen to it now. But when you put it all together, it creates this context that really takes you right into the zone of 1982 on the Sunset Strip. It’s great that they’ve been sticklers about making sure that it’s all [accurate], as far as dates, which is awesome. I respect that. [The music] helps express the viewpoint of the people making the show about the things that we’re saying.

TVLINE | Wicked City had a panel at the TCA press tour in August, and there was some fuss made about violence against women, and how Wicked City might fit into today’s TV landscape. What do you make of that criticism, not only as a female, but since you’re playing a character committing said crimes?
There are so many different viewpoints that I have about it. Number one, as an audience member, I tend to like violent movies and TV shows, because it’s not real. Number two, as far as violence toward women, it is not exclusively toward women on this show. There’s definitely some violence toward men.

And then, number three, you can consider Kent the protagonist or the antagonist, depending upon how you look at it. But his own tendencies and his own viewpoints — you can’t really try and justify the actions and viewpoints of someone who’s clearly insane. It’s a moot point. It doesn’t matter. If the point is that he’s insane, then sure. We can all agree. I also trusted the Disney-owned ABC to go as far as it needed to, to have the audience understand what was happening without being completely gratuitous — and hopefully not hurting anyone, mentally, by watching the show.

Will you be tuning in to Wicked City? Any Parenthood fans curious about Christensen’s new role? Hit the comments!