Question: I’d really like to see an Empire scoop in this week’s Ask Ausiello. —Sharon
Ausiello: Be careful what you wish for. This season’s 11th episode is titled “Death Will Have His Day” and marks the introduction of an “experienced grief counselor” named Devin. I suck at math but even I know that 1+1 = someone’s not long for this world. Oh, and in case you’re wondering, this isn’t that.

Question: Any scoop on next week’s “Baby” episode of Supernatural? Any bromantic scene we should be looking forward to? —Eleni
Ausiello: TVLine’s resident Supe-heroine Vlada Gelman has seen Wednesday’s anticipated hour and she tells me exclusively that it’s an “Impala love letter” featuring “a surprise that should delight longtime fans.” She also reports that the hour boasts “several fantastic music cues, a rather poignant talk between the brothers in their beloved car and Baby’s first valet experience!”

Question: Any scoop on possible romances for the Winchesters on Supernatural this season? —Emmerentia
Ausiello: Dean will be involved in a surprising (albeit one-sided) romance of sorts in Episode 11 when The Brothers W investigate a murder at a posh nursing home. One of the residents — saucy, sassy 60-year-old Mildred — launches a major, outrageous, PG-13 flirtation attack on Jensen Ackles, and I hear it’s hilarious. And hot as hell. I’m calling it: This is the love story for which Supernatural fans have been longing. 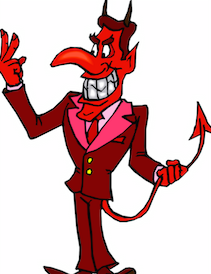 Question: Any new Once Upon a Time scoop? —Patti
Ausiello: The show is casting a mysterious, dangerous and vindictive God-like figure known obscurely as “Distinguished Gentleman” or “DG.” Given that series co-creator Eddy Kitsis summed up Season 5B as “hell,” which quickly sparked speculation that the ABC series next will brave the Underworld, one must wonder if they’re thusly casting a very dapper Devil.

Question: Anything on Bay/Emmett from Switched at Birth? —Rissa
Ausiello: Let’s just say it’s a good thing the show was recently renewed for a fifth season, Rissa, because you’re definitely going to want to find out where Bay and Emmett stand after Monday’s Season 4 finale. As you already know, Emmett is none too pleased that Travis is making a play for his ex, and all that tension is going to come to a head in this final hour — right in the midst of several important, stressful events, might I add.

Question: I’m very upset to hear that my favorite TV couple Mulder and Scully have broken up. Can you give us X-Files ‘shippers some information as to whether or not they will get back together in the course of the revival? —Lisa
Ausiello: I was upset too, but then I saw the premiere and it all made sense. They are way more entertaining apart (romantically speaking) than together. And after talking to Chris Carter, it sounds like they will remain apart through Episode 6. “Over the course of the episodes, they become closer through [their work on] The X-Files,” he tells me, “rather than through their romantic entanglement.”

Question: What’s the scoop on Grimm? —Thomas
Ausiello: The NBC series is bringing in Monroe’s uncle, a German man named Felix Dietrich who is described as “bespectacled, bookish [and] slightly off-center.” (Shocker, right?) In the course of his work as an antiquarian bookseller, Felix will come across some very old volumes about Grimms — which is helpful, considering Juliette destroyed a lot of that kind of thing when she torched the trailer — then find himself followed by those who are willing to kill in order to secure the books. He’ll show up in the United States to ask for Monroe’s help. Look for Uncle Felix to make his debut in Episode 10.

Question: Do the NCIS writers/producers already have plans for the 300th episode (this season’s 18th episode)? —Daniel
Ausiello: Since it’s not until Episode 18, as you note, and the CBS series is only now filming No. 10, “We’re starting to knock some ideas around,” says showrunner Gary Glasberg. “It’s an episode that I think we’re going to put some military and Navy attachment to, that may have to do with a veterans scenario that we’ve been intrigued by, is really heartfelt and could be something that Gibbs connects with.” Plus, as one might expect for such a milestone, “We’ll also probably bring on a bunch of surprise guest stars, as well.” 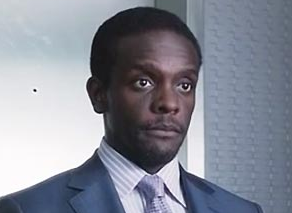 Question: I loved the first significant scenes of Chris Chalk’s Lucius Fox on Gotham. How much can we expect to see of this awesomeness during the season? Any spoilers you can share? —Nicole
Ausiello: As established in next week’s episode (though he’s off camera), Lucius is getting ever closer to fixing Thomas Wayne’s secret computer, so it’s just a matter of time until he resurfaces to keep Alfred on his toes and help mentor young Bruce. “What Sean [Pertwee] and I find exciting about the Lucius/Alfred dynamic,” says Chalk, “is it’s two people who can match each other. Usually Alfred is the smartest man in the room, the most dangerous man in the room, and now he has an intellectual counterpart who’s like, ‘I can go all day with you.’” The Wayne Enterprises tech-spert’s connection to Bruce, meanwhile, “is pure loyalty,” says Chalk. “His dad was for the greater good, and having not previously pledged his loyalty in a more active way, Lucius now has a chance to do that with Bruce, to be an adviser in a way.”

Question: Any update on a Community movie? I don’t wanna let Greendale go! —Nelson
Ausiello: “Yes, we’ve finally secured the $250 million we need for principal shooting, and we still need to find $100 million more. It’ll make Pirates of the Caribbean look like Sideways, that’s how big it is,” Joel McHale jokes when we ask him that very question. All joking aside, McHale notes that Community creator Dan Harmon “needs to write the script, but he’s one of the busiest people in Hollywood.” McHale also says he would be open to doing more episodes of the series, but a Season 7 seems highly unlikely in light of reports that Yahoo lost a staggering $42 million on the show. Fun fact: Paintball equipment? Not cheap!

Question: Any scoop on iZombie? —Steven
Ausiello: That surprise hook-up between Major and Gilda? Not a one-time thing, exec-producer Diane Ruggiero-Wright reveals. “Major’s doing some grudge-f—ing,” the EP declares. So will Liv find out about her ex’s new extracurricular activities? “People always find out something,” she hints. “Even if they don’t find out the whole story, you can’t get away with anything. They’ll be, ‘You did something with somebody. I don’t know quite what you did, but you did something wrong.'” BONUS iSPOILER: Turns out the Peyton/Ravi heart-to-heart in last Tuesday’s episode was supposed to be a goodbye. “That scene was written as an end — that was it,” Ravi’s portrayer, Rahul Kohli, reveals. “It was supposed to be them saying, ‘Good to see you. All the best.’ And that hug was supposed to be a platonic hug. But Aly [Michalka] and I did our scene together and we really had fun with it. And then we get an email from [exec producer] Rob [Thomas] a couple days later and he’s like, ‘Awww, I want more.'” 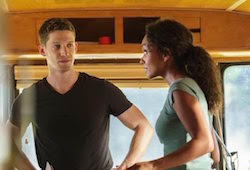 Question: I love Sleepy Hollow‘s Jenny and Joe working together. What do you have on that front? –JoAnna
Ausiello: Series newbie Zach Appleman tells us that one of the “most fun” things he’s gotten to do so far is a top-secret scene in Episode 7 in which “we both got to use our martial-arts training.” And how about a vague-but-intriguing one-word tease about the midseason finale, courtesy of Greenwood: “Help!” she cries.

Question: Any Flash scoop on Iris? Will we see her at her job as well as mixed up in the action? —Lucy
Ausiello: Affirmative. As Candice Patton explains, “We know Iris as the iconic reporter from Picture News, but she’s now kind of a part of Team Flash, which is really cool. I’m enjoying seeing her at S.T.A.R. Labs and feeling that she’s no longer kept in the dark. You’ll definitely see more of that this season, but it’s important to remember that she is a reporter and that’s how we know her. We will hopefully start to see her show up in Picture News.”

This AAnd That…
♦ I got heckled by a celebratory, high-on-revival Gilmore Girls fan Tuesday night in New York’s West Village. My work here is done. (BTW, how did I not receive a single Gilmore Q in my AA mailbox this week?! I have a new Netflix-y scoop burning a hole in my pocket, but I guess the demand just isn’t there.)