Pity the How to Get Away With Murder fan who missed this week’s episode and hopes that her co-workers will catch her up around the water cooler on Friday morning. Ain’t nobody got time to produce a power-point presentation, a multi-page flow chart and a dramatic reenactment of tearful pleas from world-class fibber Bonnie Winterbottom.

In fact, “Meet Bonnie” achieves such Ann Coulter-at-a-Hillary-Clinton-Fundraiser levels of crazy, I’m guessing an in-depth play-by-play would take longer than the combined acts of Connor perfecting his spectacular coiff, Laurel and Frank washing away their basement-sex stank, and Doomed Prosecutor Lady convincing herself she might prevail in a courtroom showdown against Annalise Keating. (Oh grrrrl, you may have won the battle this week, but we know which one of you isn’t getting hit with those fearless EMTs’ shock paddles in the three-weeks-from-now flash-forward, so…)

The good thing is, showrunner Pete Nowalk & Co. know enough to wink at their own “anything and everything goes” conventions. Possibly the greatest one-word retort on TV in 2015 arrives after Annalise tells her closest confidantes that she caught her boyfriend-turned-murder-scapegoat Nate and her mentee/student/possible-son/possibe-future-lover Wes together the previous night. “Screwin’?” asks Frank, and neither he nor Annalise nor Bonnie so much as raises an eyebrow. I mean, this is a show where Connor’s boyfriend casually hacks the Philadelphia P.D. database on the regular — for free! — and never winds up in FBI custody, so all bets are officially off. (Uh-oh: Quantico crossover episode by February Sweeps, methinks?)

I’d like to sum up the hour with nothing more than a request from Aretha Franklin — “Who’s zoomin’ who? Take another look and tell me, baby!” — and then tell you “The answer is almost always Frank.”

Instead, though, I’ll do my best to pithily recap the action: 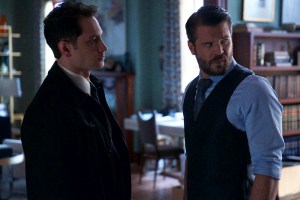 DOUCHEFACE IN CRISIS | We begin with a “three weeks from now” cutaway to “Shooting Night” — and we see Bonnie is also at the Hapstall mansion — running past ADA Sinclair’s smushed body. “It’s almost over. Promise,” she says, hopping into her car alongside… Asher! Yep, the one guy who exited Season 1 without fear of murder or murder-accomplice charges — Trotter Creek notwithstanding — is suddenly not that innocent.

Back in the present timeline — remember last week Bonnie caught Asher cutting a deal with Sinclair — Lurky McChurchMouse makes up a tale of an attempted raped by Sam to explain why she killed him — and it’s a story corroborated by Annalise (who invokes Asher’s white male-ness as a reason why he just doesn’t understand). Bonnie and Annalise are so convincing, I wonder if they believe their own lies, and it clearly has some effect on Asher — who tells Sinclair he knows who killed Sam Keating (to buy time) but eventually flees the courthouse when he realizes there’s a larger picture in which his dad cut his own deal to avoid prosecution for judicial malfeasance.

Asher winds up in dual bar scenes — don’t blame him for drinking heavily this week, K? — once with Sinclair who implores, “don’t overcomplicate it” and makes the valid point that KILLING PEOPLE OR HELPING THEM GET AWAY WITH IT IS NOT NORMAL. Bonnie, for her part, breaks out the L word and more tears, but Asher (who has his own possible but unexplored past criminal baggage) is all,  “I love you, which is why I can’t let you do this.” Annalise finally comes to the rescue — playing an old police-evidence videotape for Asher that shows a grade-school age Bonnie being sexually abused by her own father. It’s horrific — and it leaves Asher weeping.

But just like that, we’re back to the flash-forward. Bonnie and Asher, still in the car, pulling over so Bonnie can pee. (Yes, apparently, bodily functions continue even when you’ve spent the night in a blood-spattered mansion.) Bonnie hits the head — and uses the time to wash blood off her arms, toss her bloodied blouse and (speculation alert) dispose of evidence linking her to Annalise’s shooting/Sinclair’s death by balcony. But when she gets back to the car, Asher is as gone as Amy Dunne in that Gillian Flynn novel. Turns out, he’s gone to the local precinct and is declaring — AS ANY SANE PERSON MIGHT DO — “I need to make a statement.” 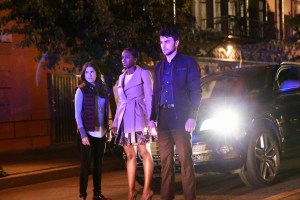 Wes, though, continues his own separate quest into Rebecca’s disappearance, and while it looks her and like Levi (aka Eggs911/the guy trying to give Michaela her first orgasm) have a breakthrough when Graveyard Dude Who’s Friends With Frank directs them to a storage locker, it turns out Annalise’s bearded right hand was playing ’em all along. Not only that, he’s also planted meth in Levi’s trunk — and the police cart him off and kill Michaela’s Great G-Spot Experiment of 2015 in the process.

Also of note: When the kids start calling for Asher and Bonnie’s heads, Annalise spills that her mousy Girl Friday acted the same way she and Frank have done for eons —with the goal of saving the Keating Five’s asses.

After Levi’s arrest, though, Michaela, Laurel, Connor and Wes head to the storage locker Frank desperately wants them to find — and discover a suitcase that doesn’t contain Rebecca’s body, but rather what looks like 20-dollar bills totaling at least in the low seven figures. Where will this surprise lead ’em, and how come nobody wondered aloud if they might want to grab a couple bill stacks — just to pay for any possible future legal fees? (Side note: Raise your hand if you screamed, “DON’T ANY OF YOU KIDS KNOW ENOUGH TO USE GLOVES BEFORE TOUCHING THE SUITCASE!”?

THE HAPSTALL CASE | Turns out the witness aunt who got her throat slit was also a raging racist — referring to Catherine and Caleb as “mulatto” and “Oriental.” Uff da. Despite her raging racism and Annalise’s iffy discovery of hidden evidence, though, the judge allows the dead aunt’s statements to be allowed into testimony. 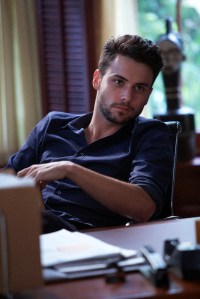 ANNALISE, FLAUREL, CONNOR, ETC | Annalise sells out Nate’s wife — explaining to Nate how his terminally ill wife tried to get Annalise to get her some life-ending pills, but her play falls flat when Nate fails to confess he’s in cahoots with Wes. After half an episode, though, our protagonist cannot abide by this kind of lying, so she meets up with Nate again and shares her knowledge of his connection with Wes. “He thinks you killed Rebecca,” says Nate — who is maybe not trustworthy? To which Annalise — also selling the Bonnie-killed-Sam lie like it was her own creation — tells Nare, “I hate what I did to you. I hate it. I hate myself. And I know you hate me, too.” Still, though, Annalise doesn’t have an answer when Nate demands to know what she’ll do if he winds up going down for Sam’s death. She can’t exactly tell the cop that Bonnie’s gulity — not of killing Sam. but the much less lower immediate threat Sam. Meanwhile, Laurel and Frank do the dirty in Annalise’s basement — “They’ll hear us.” “Only if you make me scream.” — and Connor tells Oliver he loves him. (Oh, man, Oliver is mos def winding up in the clink, isn’t he?)

Your turn. What did you think of this week’s HTGAWM? Is Asher smart to go to the cops? And how do you feel about Bonnie now, knowing her horrific childhood history? Hit the comments with your thoughts!