Not only does Thursday’s episode of the NBC drama bring the return of Hiro Nakamura — a reason for celebration in itself — but it also unites a few key characters and, at last, sets them on the path to saving the world.

First, let’s break down the eventful moments in Midian during “Game Over” — and there are a whole lot of complicated details involved here, so I’m going to try to make it as easy as possible.

In the game Evernow, Miko finally reaches the tower where she believes her father’s been kept all this time. But upon arriving, Miko encounters a mentor who informs her that the mission wasn’t to save dear dad — it was to save the Master of Time and Space (aka Hiro), who is imprisoned in the Eternal Fortress, far away from where Miko is now. (And, to make matters worse, it turns out that Erica Kravid and her Renautas cronies are in charge of coding Evernow, and they’re capable of reprogramming the game so that Miko never finds the fortress where Hiro is being held. Rude.)

Fortunately, Ren reminds Miko that every component of Evernow has a real-life counterpart — and the real-life version of the Eternal Fortress is Renautas headquarters. Convenient! Once there, Miko encounters Noah, Harris and Quentin, and while she considers them enemies, Noah quickly informs her that they are all on the same mission to find Hiro. (Also, it turns out both Miko and Ren can speak perfect English. I feel like the last few episodes could have gone a lot smoother if they’d just done that sooner.)

Here’s where it gets tricky for Miko: Even though her mission is to save Hiro (who has been trapped in Evernow this entire time, so that he can’t manipulate time or space), it doesn’t seem that she can carry out the task without sacrificing herself. When Miko goes back into the game, Harris informs Noah and Quentin that the real Miko died in a car accident a while back. The Miko we’ve come to know is merely one of her father’s creations, and she can’t survive the mission she’s been given. So, like… bummer. (Also a bummer? Just before Miko re-enters the game once and for all, Ren tells her he loves her, and her response is, “I know.” Probably the last reaction he was hoping to get, right?) 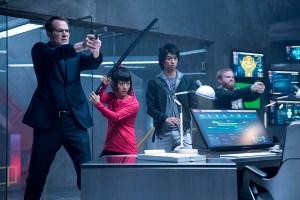 The good news is that Hiro does get freed from his Evernow prison, and when he meets up with Noah in the present day, it’s an awesome reunion between two friends. (The bad news is that we may not see Miko ever again, but hey, I’m optimistic.) At first, Hiro is ambivalent about messing with the past, but when Noah convinces him of all the evil that Erica Kravid has set out to do, Hiro agrees to take Noah back to the Odessa summit on June 13, hoping to get some answers about what really happened to Claire and the rest of the Evos. (We won’t actually see their trip until next Thursday, but progress is progress.)

* Quentin dies at the hands of his own sister! (Sorry, I may have buried the real lede of this recap.) While Harris and his clones attempt to stop Miko from re-entering Evernow, Quentin tries to talk some sense into Phoebe so that she’ll stop using her powers to help Erica. But Phoebe, believing that Erica gave her life some purpose, entangles Quentin in her dark shadows, causing him to die in Noah’s arms. (But he was the only comic relief, guys!)

* Taylor sneaks into her mom’s office at Renautas and swipes some video footage of the labs where Evos were poked and prodded — her goal, of course, is to find out where her friend-with-benefits Francis was taken. She then relocates to a motel, where she records a video exposing Erica’s ulterior motives to the world — oh, and judging by that positive pregnancy test on the bathroom sink, things are about to get real interesting for Taylor in the coming weeks.

* In Los Angeles, Carlos convinces Capt. Dearing to take him wherever his nephew and Father Mauricio are being held. After admitting the real reason why he’s been bagging and tagging Evos (in short: He was making $10,000 per person), Dearing brings Carlos to a facility called Sunstone, where Jose and The Rev. should be — but there’s a catch: You have to be an Evo to get in. Upon arriving, Dearing produces a vial of some mystery liquid that Carlos must drink, in order to fake his way through the “Are you an Evo?” blood test. For reasons I can’t possibly understand, Carlos believes Dearing, drinks the whole vial in one shot… and, as expected, immediately starts coughing up blood and writhing in pain. Because what else should he have expected? 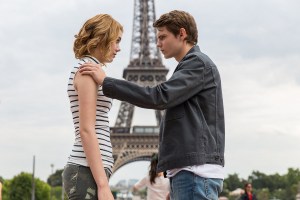 * After burning down his house (and leaving Joanne a voicemail to tell her he did so), Luke heads to a marina, where he buys a boat with the money he got from selling his practice. It turns out this is all part of Luke’s suicide plan, and without giving it a second thought, he fills a backpack with bricks and jumps into the water to drown. But wait! That’s not at all! Malina, who hitched a ride out of Quebec on the back of a truck, ends up at the same marina, and she creates a whirlpool in the water after seeing Luke jump in. Luke is catapulted back to the water’s surface, and as he sits with Malina on a bench moments later, she opens the envelope Farah gave her and produces a picture of Tommy. “We’re going to save the world together,” she informs Luke, who tells her that he knows exactly where Tommy is — and he’s going to help her find him. (Aw, yay! Luke finally has a road-trip companion who doesn’t want to kill people!)

* Speaking of Tommy, he and Emily take a quick day trip to Paris — the perks of teleportation, I suppose — but the outing goes awry when Tommy is forbidden from seeing the Eiffel Tower due to his Evo abilities. Tommy’s furious at the injustice of it all, but Emily calms him down by showing him a comic book series in which people with superhuman abilities make the world a better place by fulfilling their destinies. (Because there’s nothing like a good humanity-saving prophecy to make a date extra romantic.) Once the pair gets back to Carbondale, feeling much more optimistic about this whole saving-the-world thing, they celebrate by removing Tommy’s tracking device…and then they make out, because Emily’s boyfriend is apparently no longer in the picture. (Seriously, did I miss their break-up or something? Where has he been?)

OK, your turn. What did you think of Thursday’s Heroes Reborn? Were you happy to see Hiro back? Hit the comments!