The Vampire Diaries‘ hot new trio — Bonnie, Damon and Alaric — is hitting the road Thursday (The CW, 8/7c) in search of Lily’s elusive sixth heretic, and Kat Graham promises it won’t be long before the trip takes a delightfully bloody detour.

“This Oscar meeting takes a violent, crazy turn,” Graham tells TVLine. “A lot is happening in the beginning of the season as we go on these little missions. This one is all about the Phoenix Stone; we’re going to learn why it’s important, what it can do and how it’s connected to other things.”

It’s going to be a big episode for Bonnie and the boys, especially when it comes to advancing her friendship with Alaric.

“Bonnie will always be a compassionate person, and she obviously knows the kind of desperation that comes from losing someone you love,” Graham points out. “When Alaric opens up to her about what’s going on [with Jo], I think you’ll get to see a really cool side to their relationship.” 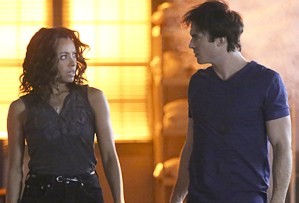 Of course, the “Bamon” friendship will also gain more momentum this week. Graham says it’s “great” that “he and Bonnie have this very fun, playful relationship” because, let’s face it, “Damon doesn’t really have many people.”

As for Bonnie’s upcoming flash-forward, Graham says fans won’t have to wait too much longer to find out what the future holds for her character — and that they should prepare themselves for a huge reveal.

“There’s going to be worldwide trend, I think,” Graham says. “The fans are going to be really shocked and happy and will get all sorts of feels. I’m excited for people to see that because it’s a big moment for the fans. When I read it, even I was like, ‘Oh, really?!'”

Your thoughts on the Phoenix Stone mystery? Predictions for Bonnie’s future lover? Drop ’em in a comment below.