Kara Danvers isn’t the only one warding off villains on Supergirl. The executive producers behind the CBS drama have an enemy of their own to face down, and it’s called CGI.

“The biggest surprise is really how hard it is to pull these shows off, week in and week out, with the visual effects and the stunts and the hyper-amount of planning that goes into them,” EP Greg Berlanti told reporters during a conference call on Monday.

Berlanti — who also oversees Arrow, The Flash and The CW’s upcoming Legends of Tomorrow offshoot — has experience making technically demanding television. But Supergirl‘s freshman season has nonetheless proven a challenge.

“You think, ‘Oh, we pulled off Arrow, so we’ll be able to do The Flash‘… and this has turned out to be a lot bigger than Flash,” he continued. “Every one of these shows has had a very steep and unforgiving learning curve. We’ve been incredibly proud and excited by the results and, hopefully, everyone out there will be, too.”

Ahead of Supergirl‘s Oct. 26 launch (8:30/7:30c), Berlanti — along with fellow EPs Ali Adler and Andrew Kreisberg — offered up a whole slew of teasers for the Melissa Benoist starrer. Read on for the highlights: 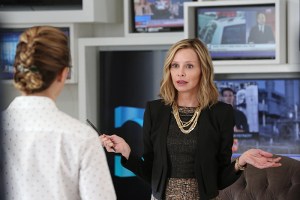 KARA, YOU IN DANGER, GIRL | Don’t be fooled by Kara’s super-strength, heat vision or that whole flying thing she can do. Those powers will hardly make her invincible against the series’ many villains.

“We’ve shown that [Supergirl] is fighting certain aliens, and she fights Livewire, who has electrical powers. She has enough electricity to stop Supergirl’s heart,” Berlanti teased. “On the old series, unless you had a rock of kryptonite, it was pretty much a wipeout for the bad guys — we certainly don’t want that. We always want to feel like our hero is in jeopardy.”

WHERE MY GIRLS AT? | Although Kara’s relationship with her sister, Alex (Chyler Leigh), will be central to the series, the titular heroine will enjoy female bonding elsewhere — even in the unlikeliest of places. “[Kara’s boss] Cat [Grant], in the pilot, is definitely a voice of wisdom,” Adler shared. “Whether she says it in a kind way or not, she’s always inspiring Supergirl to achieve higher heights.”

Kara will also befriend Lucy Lane, played by Witches of East End alumna Jenna Dewan-Tatum. According to Berlanti, “She comes to the show as a former love interest of Jimmy [Olsen]’s, to add some complications. But with Kara being the nicest person in the world, Lucy really likes her, and the two of them have some adventures together.” 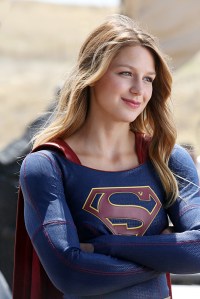 THE POWERS THAT BE | Just because Supergirl literally carries the weight of a plane on her shoulders in the series premiere doesn’t mean she’ll understand the extent of her powers all at once. “Our collective gut is that she’s very much at the beginning of her journey,” Berlanti said, adding that Kara will continue to have questions “not just about her powers, but about her backstory and where she comes from. There’s always a bit of mystery around her origins and around what her capacities are.”

BEST OF BOTH WORLDS | As for the million-dollar question — “Will there be a Supergirl/Arrow/Flash crossover?” — Berlanti confirmed there are currently no plans for his CW superheroes to meet Kara anytime soon. (In August, CBS Entertainment chair Nina Tassler said the three series would only cross over in promos for the time being.)

“Flash and Arrow [fans] know we have not mentioned the existence of Superman on those shows, and he does exist on [Supergirl],” Berlanti continued. “Storytelling-wise, that would be something we’d have to overcome. We’re just focused on getting this one launched and hope that it enjoys some of the same success… with the same quality and commitment of fans. And if all those things happen, who knows?”

Are you ready for Supergirl to take off? Hit the comments with your hopes for the series.