Lucious Lyon may dismiss baptism as nothing more than the art of getting dunked in tap water, but heaven knows he and his family could use some type of divine intervention by the end of this week’s Empire.

Rhonda can’t get no satisfaction — yes, we mean that kind of satisfaction — while Jamal is grappling with his boo Michael getting way too much of the stuff on their apartment balcony (and from a freaky-deaky, tunic-wearing hipster who says “a mouth is a mouth” as casually as Cookie grabbing a sidearm).

Salvation may have dropped into Andre’s lap, but so have half a dozen sequined-clad hoochies whose paychecks from Gutter Life Records guarantee that Miley Cyrus has some competition for the title of America’s Next Top Twerker.

Meanwhile, Cookie’s fledgling label is under siege by local gangs (and a yapping canine, to boot); Lucious is having traumatic childhood flashbacks; Porsha’s on probation at work; and Hakeem — despite his commitment to living la vida mogul — winds up getting a hood thrown over his head and kidnapped in broad daylight like he’s fallen into Showtime’s Homeland and switched places with Carrie Mathison.

As Hakeem’s girl group would put it, the whole situation is “No bueno!” But despite no easy solutions to our protagonists’ dilemmas, let’s recap the action from “Be True”: 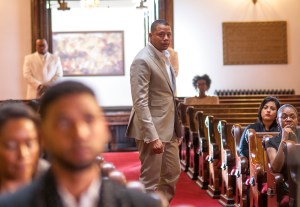 TAKE THEE TO CHURCH | The big tentpole of Wednesday’s episode is Andre’s baptism, and his need to confess his sins — no, not his murder-type sins — to his family. Who can blame him? His pastor spends his free time harvesting succulent-looking tomatoes somewhere in the middle of New York City — so clearly God is on his side. Nobody’s all that excited about the idea — poor Rhonda doesn’t get so much as an ass-grab for leaving her panties at home, while Jamal has no idea if the pastor in question wants him to “pray the gay away” — but every significant Lyon shows except Lucious. (We also get a beautiful and long-overdue moment of brotherly love with Andre, Jamal and Hakeem that comes thisclose to making me tear up.)

“That devil walk in here, this whole place might catch fire,” says Cookie, pointing out the benefits of Lucious’ absence. But as soon as she says it, the Lyon patriarch shows up, too — prompting her to shift hard to the right and make some space, in case a lightning bolt hits her ex. Andre is clearly exhilarated by the ritual, but just as quickly gobsmacked by the sight of Lucious bolting. Little does he know, his submersion into the water has triggered his dad’s childhood flashback to a time when his own mother attempted to drown him in a bathtub. “Judge not, lest ye be judged,” Andre! Or, to put it in 2015 terms, you do you! Just keep mouth shut — as an almost prescient Cookie tells Andre when he starts rambling about being a bad person and having committed bad acts. (She knows who ended Vernon, doesn’t she?! She’s that kind of mom, I suspect.) 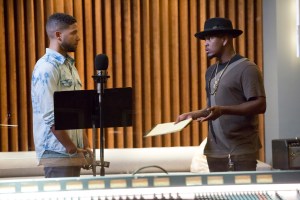 PORTRAIT OF THE ARTIST AS A STANK HO | Lucious doesn’t want Jamal to take Michael on tour because he needs to “be in seduction mode,” but their studio buddy Ne-Yo points out that maybe Papa Lyon isn’t the best person to be giving out relationship advice. (Lucious’ last two paramours respectively tried to smother him with a pillow and slept with his son, after all.) Painter Guy With Terrible, Scraggly Beard (aka Chase One) complicates matters during a night of drinks with Jamal and Michael, scoffing at the “heteronormative shackles” keeping them together (pro tip: never trust someone who huffs “heteronormative” in the club) and tries to go down on Jamal in a public hallway. Jamal is all, “creeper, please!” but Chase isn’t even embarrassed, declaring his attempted sex act another “form of artistic expression.” Later, though, when Jamal catches Michael receiving a “masterwork” from Chase, he blows his lid (not a euphemism) and threatens to hurl the artist off his balcony. Becky throws an arm at Chase for good measure, ’cause she’s a boss, but I’m not sure even Iyanla: Fix My Life could salvage the Jamal-Michael romance. 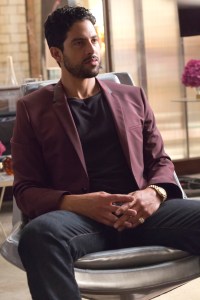 WHAT DOES COOKIE MEAN BY “PACKIN”? | Tiana gets mugged in the Lyon Dynasty “lobby” — and Cookie comes to learn it’s a local gang demanding payment from her supposed deep pockets. A super duper sexy concert promoter (Adam Rodriguez) comes by to interview and promises he’ll get his hands dirty to protect the label. “No promoters are gonna touch you — except me,” he says, assessing the threats against Lyon Dynasty while psychically singing Brandy’s “I Wanna Be Down” in Cookie’s ear. Later, when thugs hired by Lucious come to steal the Lyon Dynasty masters, he and Cookie pull their guns and shut that s— down — and all that’s left is love (or its close cousin lust) in the air. 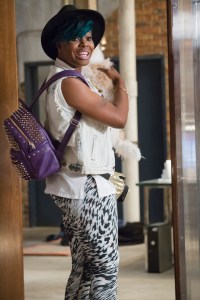 HOW PORSHA GOT HER JOB BACK | When the hour starts, Cookie maintains Porsha’s been fired for giving her identity to NYPD officers for turnstile jumping. But the Assistant Most Likely to [Insert Act of Foolery Here] shows up with her grandma’s fluffy white dog Whoopty-Woo, and Cookie can’t help but hire her back — on probation, natch.

WRONG KIND OF HOOD-IE | Hakeem macks on Mirage a Trois’ new lead singer Laura, but she’s not about that life! She just wants to sing for the people, not be one of her boss’s conquests. He makes it up to her with a display of “Here, take my car service” — proving that he’s on his “mogul swag.” But the next day, as he jogs in the park, he’s kidnapped by a band of thugs and thrown in a van, making us all think, “LUCIOUS IF YOU HAVE ANYTHING TO DO WITH THIS, COOKIE WILL KILL YOU WITH A BROOM!” 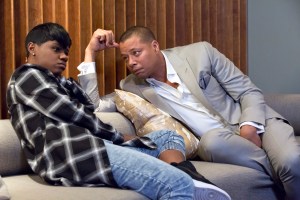 ETC | The feds drop their case against Lucious — and declare Vernon’s death a suicide (LOL!) to save face about their star witness’s decomposed corpse showing up in the passenger seat of their prosecutor. (Speaking of that, Roxanne Ford and Her Mighty Bosoms have taken a leave of absence.) Freda Gatz is working through her daddy issues during epic studio sessions — and, in the process, inspiring Lucious to be a better human being. And th-th-th-that’s all, folks!

What did you think of this week’s Empire? Is Lucious involved with Hakeem’s kidnapping? Do Jamal and Michael stand a chance? And could we have used a little more Adam Rodriguez? Sound off in the comments!