This week on The CW’s Arrow, Laurel popped by Nanda Parbat with a very special request of Malcolm, while back home “The OGs” dealt with a metahuman threat.

THE PIT AND THE PANDEMONIUM | Laurel and Thea interrupt Malcolm’s sparring/”sparring” session with Nyssa in Nanda Parbat to announce that they did not come alone, that they have dead Sara with them. Nyssa balks at the notion of resurrection by Lazarus Pit, as does Malcolm himself — as he notes, given the extremes of Sara’s condition, “Who/what comes out wouldn’t be Sara.”

Later, Laurel tells Nyssa that she was counting on her support in this endeavor, to which Nyssa scoffs, “Then you don’t know me at all…. I wouldn’t wish [the Pit] on my worst enemy, let alone my beloved.” Nyssa adds: “I miss Sara, too, but she is gone forever. I’ve accepted that, maybe it’s time you did too.”

Malcolm checks in on Thea, whom he recognizes as having “bloodlust” coursing through her own post-Pit body. “You need to feed the impulse,” he says, suggesting that the occasional killing spree will sate her craving. Thea lashes back, 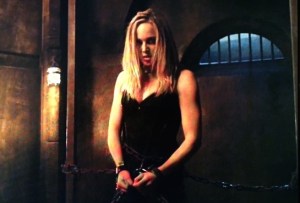 asking if Malcolm has any “normal” fatherly advice to offer, and he talks of/lies about a “sage” who lives in the mountains and may be able to help.

Thea later wakes from a nap to find League assassins in her room, whom she swiftly executes. Turns out they were an offering from her father, to feed her current bloodlust. When Thea fails to appreciate the sick gesture, Malcolm offers a make-good — he’ll oblige Laurel’s request to revive Sara. Nyssa tries to stop the ceremony, but Laurel and Thea lower Sara’s corpse into the waters anyway. And sure enough, moments later, an alive and unwell Sara rises to the surface, springs out of the Pit and growls. As the feral femme is shackled to a wall, Malcolm warns Laurel and “brace for the worst.” Ignored Nyssa meanwhile destroys the Pit, so that, among other reasons, when she one day kills Malcolm, it will stick! 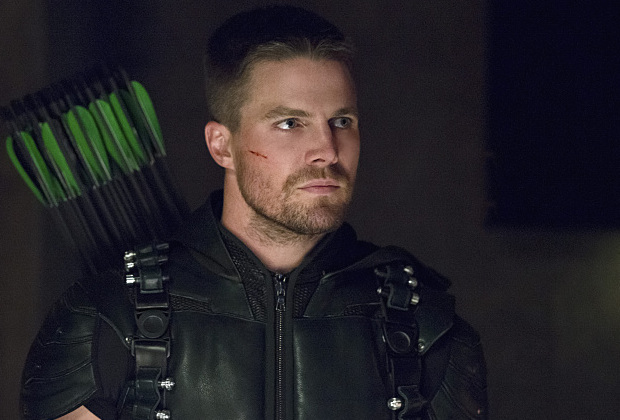 still frosty between Oliver and Diggle, to the point that one night they pursue separate agendas — Diggle tracks Mina Fayad, the woman A.R.G.U.S. ID’d as ordering the hit on Andrew, while Oliver chases a hold-up — both having zero good results. Oliver, for one, wound up lured into a trap set by Double Down, a metahuman from Central City tasked by Darhk with killing the Green Arrow.

After their respective close calls, Felicity chews the guys out and forces them to resolve their issues, “or I’ll find Mirakuru soldiers to knock some sense into you.” Diggle tells Oliver that the issue isn’t forgiveness, but how to move forward alongside a man he doesn’t trust. That whereas Dig would once have easily taken a bullet for Oliver, now… not so much. Oliver snaps back, “I get it” — but why isn’t he being afforded any chances to earn back that trust? When Oliver mentions Fayad as having ties to Darhk, Diggle lets Oliver in on the secret he has kept for two years, relating to his brother’s purposeful murder.

Darhk meets with Fayad and Double Down, chiding them both for the failed attack on the Green Arrow. It is mentioned that the others are anxious to move into “Phase III,” which Fayad calls “Genesis.” But the convo is cut short when Darhk invites Double Down to hurl a card at him, which the mystical Damien stops mid-air… and then redirects into Mina’s throat.

Felicity takes one of Double Down’s playing card tattoos to Palmer Tech whiz Curtis Holt, but just as he deduces that the tattoo ink could help them track the owner, the flip-side is true — and the metahuman is already there in their lab, hurling razor-sharp cards. Felicity whisks Curtis to a secret elevator that goes down to the basement Arrowcave, as she reveals that she works with Green Arrow. Double Down follows them there, and a shootout ensues, with Felicity toting an automatic weapon to some effect, scaring the meta away.

When Oliver and Diggle find dead Fayad, Diggle laments that he has lost his only lead. Oliver spins the situation thusly: Diggle only found one lead because for the past two years he was working at it alone. Now, they can pursue it together. They then intercept Double Down, who’s speeding out of town, but as the meta notes, “You don’t scare me half as much as [Darhk] does,” so for now they have the tight-lipped guy locked up in The Flash’s Pipeline. (Hope he packed a sandwich.)

HOW (LIAN) YU DOIN’? | In the flashbacks — which at this rate aren’t shaping up much better than the Hong King edition — Oliver saves the unnamed woman from execution, after she admits to stealing a cache of the hybrid drug “Slam” they’ve been farming for Baron Reiter. Spiriting her away into the woods, he urges her, “Trust me, or we’ll both be dead.”

What did you think of Sara’s resurrection, The OGs’ reunion and whatever’s going on with whatshername on the island? And what sort of “surprise” is Ollie planning?