This week on The CW’s Arrow (Wednesday, 8/7c), the League of Assassins’ lair in Nanda Parbat gets a pair of surprise visitors, when Laurel Lance (played by Katie Cassidy) shows up with Malcolm Merlyn aka Ra’s al Ghul’s troubled daughter Thea, as well as quite-dead Sara, in tow.

How might Malcolm react to the unexpected visit and the even-more-unexpected favor to be asked of him? The always entertaining John Barrowman shared with TVLine a peek at what’s to come.

TVLINE | How has life as Ra’s al Ghul been treating Malcolm?
It’s complicated. [Laughs] It’s complicated but it’s good, because where we left him, he had the League kneeling at his feet, Nyssa included. Six to seven months have passed, so you do don’t know whether he’s in control or not, but something happens [this week] where you realize that these fighters, these men and women, are under his control.

TVLINE | Has he made any changes to the place? Maybe some curtains to soften it up, or…?
Oh God, no, it’s still as hard as ever. He wanted it just the way it was. Malcolm doesn’t want to change anything, and he’s not really a decorator!

TVLINE | How would you describe his current dynamic with Nyssa?
All I will say to that is it’s going to take a twist and a turn. Obviously, Malcolm was involved with the death of her father, so she has a bit of a grudge 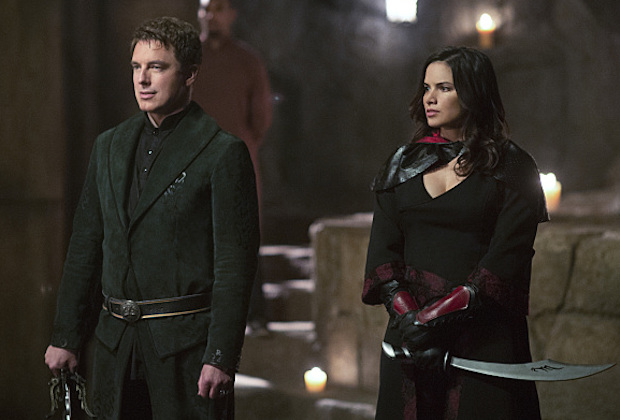 and she’s very vocal about it. But she does something that is one of the episode’s jaw-dropping moments, where people are going be like, “Ohhhh…. Myyyy…. God.”

TVLINE | Obviously, Laurel and Thea are on their way. Does Malcolm welcome these visitors?
Malcolm doesn’t know that they’re going to waltz through his door, and when they do, a dilemma is put in front of him. There’s his daughter, who he knows has been having some trouble and he didn’t really want her going in the Pit in the first place. And then you have Laurel, a girl who blatantly turned to Malcolm when he saved her life and said, “I wouldn’t do the same for you” — and she’s brought her sister, who is someone Malcolm had killed to obtain his objectives. And Laurel’s back to ask him to resurrect Sara! That is probably one of the most bizarre dilemmas that he will ever come across, and what’s interesting is how he deals with it and explains it to Laurel. It becomes a moral and ethical issue with Laurel, and I think the audience is going to be like, “What?!” — which I love, because it shows complexity.

And he knows something is going on with Thea, that she’s got this bloodlust in her, this violent streak, so he turns to her and says, “I’m concerned about this.” But what he does with her is completely unethical and has no morality attached to it. That’s again the complexity of Malcolm, that within those two situations, the audience is going to be like, “O-M-G.” He’s offering two different solutions for two different people.

TVLINE | So, the League has no “hangover cure” for Thea, for Pit people?
Uhhh, you don’t know that. That question may be answered tomorrow. 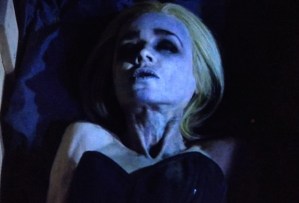 the whole Sara thing: Unlike when Thea went into the Pit freshly dead, Sara… has seen better days. Do we turn the Pit to “11”?
[Laughs] I think it goes up to “55.” Yeah, that’s a little bit more of a “risk,” shall we say. Malcolm has said before that when somebody goes into the Pit, a piece of everybody’s soul who has been in there prior goes into that person. Well, Sara’s going to need a lot more than just a piece of everyone’s soul. It’s going to need to fill her a lot more than it did Thea, so Malcolm is very intrigued by how she might come out. But would he want her to come back when he got rid of her in the first place?

TVLINE | Basically, this is the wrong favor asked by the wrong person.
Totally.

TVLINE | Are the days of any hint of paternal warmth between Malcolm and Thea gone?
Without giving too much away, I think you’re going to see that Malcolm’s love and concern for Thea has grown, and it’s almost like he’s trying to prove it to her and make her realize that what he is doing is not only for the benefit of his family but for her, because he is adamant about protecting her. It’s an unconditional, parental love. Malcolm just goes about it in a unique way! 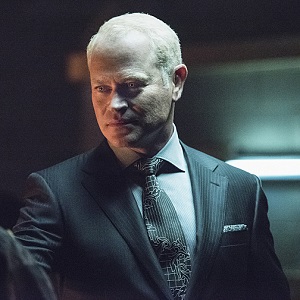 Malcolm back in Star City? Has the new Ra’s earned vacation days yet?
Malcolm is Ra’s al Ghul now, he can do whatever he likes! Malcolm’s been watching what’s going on, he knows that Damien Darhk (played by Neal McDonough) is causing havoc, he knows that it’s getting close to harming his daughter and it’s also getting close to harming the man out there that he always wanted his son to be like, Oliver. Malcolm’s just waiting for that right moment, either to be asked or to step in — and when one of those moments happens, again the audience is going to go, “Oh my God, there he is!” Again, I can’t tell you what’s going to happen, but Malcolm will always be there when they need help.