This week on Marvel’s Agents of S.H.I.E.L.D., Hunter’s hunt for the new HYDRA head may have had a surprising casualty, while Daisy made a discovery about their hairy new foe and Simmons asked Fitz for help.

SHOOT FIRST, ANSWER TO MAY LATER | Hunter’s risky play — to embed himself within the ranks of HYDRA — came to an expected boil when he was thrown into a car trunk (“It’s always the boot”) and driven to meet with the “director.” Hunter couldn’t dodge the inevitable face-to-face long at all, so he instead greeted Ward plainly, then ducked for cover as gunplay ensued. May joined in the fracas, until Ward pulled an ace from his sleeve — live video of Andrew, whom Ward had sicced several HYDRA goons on. If Hunter and may didn’t cease fire within 30 seconds, Ward would not call off his dogs.

Hunter’s obsession with killing Ward would not be suppressed, alas, so against May’s wishes he gunned for the HYDRA boss anew. Ward escaped through a window, albeit with one of Hunter’s bullets in his shoulder, while May stood shell-shocked by the grim fate her partner had bestowed on her ex. We then see Werner Von Strucker fleeing the Qwik-E-Mart where he and others had just confronted Andrew, a well-heeled body left supine on the store floor just before the place burst into flames.

LASHING OUT | After three pre-breakout Inhumans were targeted by Lash, Coulson, as arranged last week, partnered with Rosalind Price’s ATCU to ferret out the monstrous mystery. Daisy tracked down an Social Security Administration IT guy with ties to the big guy, and sure ’nuff, just as they were carting him away to the ATCU’s brig, Lash showed up. The resulting skirmish with Daisy/Quake sent the transport toppling, after which Lash escaped with Frye the IT guy. Frye insisted he revealed nothing, but regardless, Lash used his strange energy blast to zap the guy dead — after reminding that he is “necessary.” As Lash then skulked away, a shaken Daisy noticed the creature’s shadow morph into that of a human — meaning, he could be anybody.

ANY PORTAL IN A STORM | Fitz 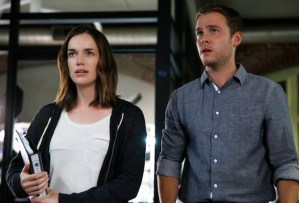 sensed Simmons was holding something back, but Bobbi remained mum on what she witnessed last episode, when Jemma clamored to “go back” by somehow rebuilding a portal. Later, in a shrink sesh with Andrew, Jemma dismissed his pat notions that everything will be all right, that’s it’s all behind her. “No. It’s not,” she flatly maintained. After Fitz stumbled across some of Simmons’ research into reconstructing the portal, Bobbi urged him to get the truth from his colleague first-hand. And when pressed, Jemma indeed came clean — she needs to go back to that planet, because something happened to her there…. And she wants his help in making that happen.

What did you think of the episode “Devils You Know?” And do we suspect S.H.I.E.L.D. somehow arrived in time to rescue Andrew? (How much pain can May withstand?!)