We’ve only got one hour left of The Voice‘s Season 9 Battle Rounds, and thus far, five out of seven “Steals” have been used with the kind of common sense and good judgment you’d expect from Kim Davis officiating at a same-sex wedding.

OK, OK, maybe I’m being a tiny bit melodramatic. But when Blaine Mitchell’s lifeless “Old Time Rock and Roll” scores him a second chance at Sawyer Fredericks’* crown and sash, while Cassandra Robertson’s effortlessly elegant “Nobody Knows” gets her bupkis, then it’s high time to break out the hyperbole — if not the brickbats and torches. (*Speaking of rioting in the streets, where the hell is the Season 8 champ’s major-label debut single? Or should we assume Mark Burnett has sent him to the corn field alongside Jermaine Paul, Craig Wayne Boyd and Javier Colon?)

If I’m forced to find a silver lining to Monday’s episode — which may go down in history for Gwen Stefani’s dimmest life decision ever — it’s that Battles and Knockouts are always a time of gruesome bloodletting — as the field of 48 gets hacked and bludgeoned down to just 20 in advance of the Live Playoffs.

In other words, wailing and gnashing one’s teeth over an egregious Battle Rounds ouster would be akin to starting a letter-writing campaign to HBO to protest the death of Wildling No. 47 during Game of Thrones‘ “Hardhome.”

To that end, let me stop tearing my garments for Chase Kerby and Lyndsey Elm (this is why Gwen never wins a four-chair turn!) and get to ranking tonight’s Battle Rounds in order from least- to most-promising winner:

6. Team Gwen: Braiden Sunshine defeats Lyndsey Elm on “No One Is to Blame” | Braiden may or may not be totes adorbs (sorry for devolving into Gwenspeak), but cute-kid aesthetics aside, he got utterly decimated by Lyndsey in terms of stage presence, uniqueness of tone, pitch and emotional connection. This Battle result proved so infuriating, I’m ready to start a Change.org petition calling for Gwen to be immediately evicted and replaced by Cher or Jill Scott or Reba (excellent previous Voice advisers, all) going into the Live Playoffs.

5. Team Blake: Blind Joe defeats Blaine Mitchell on “Old Time Rock and Roll” (Blaine stolen by Adam) | This cover of the Bob Seger jam voted Most Likely to Get My Mom on the Dancefloor at a Wedding had all the urgency of a half-glass of tap water you forgot to empty and put in your dishwasher before bedtime. And I’m not wasting any more nonsensical metaphors on either of these fellas, since I strongly suspect they’ll both get booted in the Knockouts. 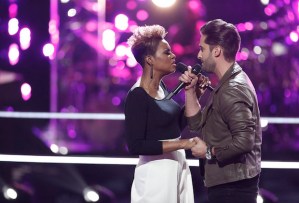 4. Team Adam: Viktor Király defeats Cassandra Robertson on “Nobody Knows” | This matchup of slick, soulful professionals reminded me of the kind of Amanda Brown-Trevin Hunte showstopper that used to always snag The Voice pimp spot. For every melodic twist or soaring glory note one of ’em hit, the other would counter with something equally lovely. I’d have given the edge to Cassandra — who took bigger risks and showcased a more interesting tone in the process — but Viktor’s no slouch, either. Too bad Cassandra’s fate was sealed the second Carson reminded the judges she was 48 years old. (Yes, the days of Beverly McClellan have long since passed.)

3. Team Adam: Andi & Alex defeat Chance Peña on “Wherever You Will Go” (Chance stolen by Blake) | It’s always tough judging a duo-versus-soloist Battle, so in this case I just pressed pause on my critical ear and tried to enjoy the simple, sweet arrangement that allowed Andi & Alex to showcase their airy harmonies and gave Chance a chance (sorry) to prove he’s got a far sturdier instrument than his Blind Audition indicated. Finally, a Steal that didn’t make me want to hurl the remote through the TV screen! 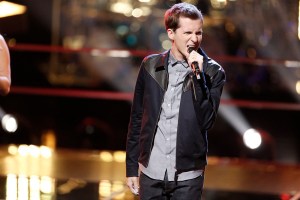 2. Team Pharrell: Evan McKeel defeats Riley Biederer on “Higher Ground” (Riley stolen by Gwen) | Evan may have followed Stevie Wonder’s template pretty faithfully, but what he lacked in creativity he more than made up for with a display of impressive vocal dexterity and pitch perfection (all while moving and grooving across the stage). Riley hit a couple of hinky notes in her attempts to “stankify” the melody, which, along with her penchant for interrupting her mentors, made it a little surprising when she got Gwen to drop her hip into the Steal button.

1. Team Gwen: Korin Bukowski defeats Chase Kerby on “Samson” | I know Chase hit a few rough patches in his transition from falsetto to chest voice, but there was something so ethereal in his delivery that I’m planning on enthusiastically scooping up all his post-show releases just to hear where his crumbling, emotional falsetto takes him next. That said, I can’t argue with Gwen giving the win to Korin, whose tone was — at once — feather delicate and iron strong. Ms. Stefani may have the weakest team in Season 9, but it only takes one contestant to make it to the finale — and if she allows Korin to play left-of-center with her song choices, a long and successful run is a definite possibility.

OK, your turn. What did you think of Night 3 of The Voice‘s Season 9 Battle Rounds? Who were your faves? Take our poll below, then sound off in the comments! 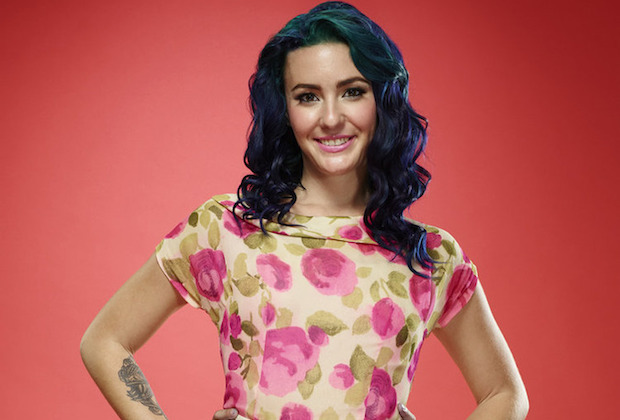