Girl Meets World did something kind of crazy this weekend — two somethings, actually.

The Disney Channel comedy’s three-part “Girl Meets Texas” event pulled the rug out from under Riley and Lucas’ relationship, an unspoken institution since Day 1 for many Girl Meets World fans. Crazier still, Riley practically forced Maya to go out with Lucas and explore her feelings, then agreed to go on a date of her own with Charlie “Cheese Soufflé!” Gardner.

Maya and Lucas’ campfire conversation exposed a definite spark between them, but considering their follow-up date ended with her dumping smoothies on his head, I’m not sure what to make of their “relationship.” In fact, I’m not sure any of GMW‘s core trio knows what they’re feeling at the moment. 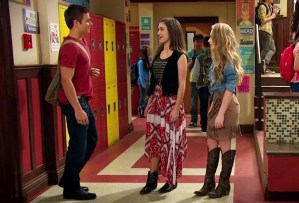 In a way, this love triangle feels both inevitable — what TV show doesn’t have one? — yet also unthinkable, especially for those of us who have been treating Riley and Maya like smaller lady versions of Cory and Shawn; unless I missed a several episodes of Boy Meets World, those two never fought over Topanga.

Girl‘s trip to Texas, which was emotionally reminiscent of Boy‘s infamous ski-lodge episode, essentially yanked the viewers out of their comfort zone and dropped them in a state of utter confusion. It was a bold move for a Disney Channel show, even for one that consistently refuses to talk down to its audience. I believe Farkle put it best when he said, “I’m sure we’re all wondering what happens now.”

Your thoughts on Riley/Charlie and Maya/Lucas? Drop ’em in a comment below.