As it turns out, the only thing more difficult than deciphering Jane Doe’s Blindspot tattoos is getting series creator Martin Gero to discuss the obstacles that await his mysterious protagonist.

“It’s really hard to talk about,” Gero admits to TVLine, while discussing an episode that will air later in the NBC drama’s freshman season. “Talking about it will reveal the main… yeah, that’s impossible.”

Fortunately, Gero was able to drop a few hints about tonight’s episode (10/9c), which may reveal whether Jane is actually Weller’s long-lost friend, Taylor Shaw. Below, he answers our most pressing questions about Jane’s identity, her intense connection with Weller and the ways in which CIA Deputy Director Tom Carter will complicate… well, everything.

TVLINE | I imagine, for many viewers, it was a pleasant surprise to get answers about Jane’s identity in Episode 3, rather than in the Season 1 finale. What was your thought process behind answering that question so quickly?
For us, the central emotional arc of this season was Weller and Jane trying to figure out how to be with each other after the revelation of the Taylor Shaw thing. For us, it was not something we even considered waiting [on], even until midway through the season. When we were cutting the pilot together [we realized that] there were too many twists, [so] we decided to push [Jane’s identity] to the second episode. And then the second you start thinking about it and saying it out loud, you can’t really stretch it out much longer. Finding out whether she really is Taylor Shaw is so easy. The really interesting stuff happens after Taylor Shaw, as far as the emotional stuff that goes on between Weller and Jane. 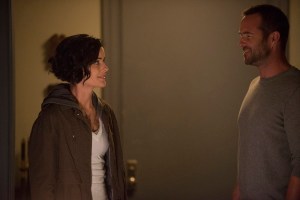 TVLINE | But now there’s new evidence that suggests Jane is not Taylor Shaw. How will that play out in this week’s episode?
The isotopic evidence is not something Weller, for one, is going to put a lot of stock in. He feels like the DNA is 99.9 percent sure. They did three separate tests, and it’s her DNA against the samples they had from Taylor. He starts to question whether he’s remembering it right — whether his origin story for Taylor lines up with what it actually might be, whether she was born in Pennsylvania or she was born somewhere else, and what that maybe has to do with it. It gives pause to some other characters, but Weller certainly still believes that this is Taylor Shaw.

TVLINE | When Weller was describing Taylor’s kidnapping, Jane had some sort of flashback to that event. Might that be a clue to her real identity?
Absolutely. And there’s some more of that coming up in the next episode.

TVLINE | There’s obviously a spark of some sort between Jane and Weller, especially if she is Taylor. Is a romantic relationship even on the table for them right now?
Oh, yeah, we’re considering it. We’re considering everything. What’s really fun for us is how emotionally complicated their relationship is now. She’s someone that he’s essentially been obsessed with for 25 years, and now she’s back and she doesn’t necessarily remember that. The only person she has an actual connection to is Weller.

TVLINE | It seems like the CIA will become particularly dangerous for Jane this week. What can you say about Carter’s tension with Mayfair?
Carter, who is played expertly by Michael Gaston, is our Big Bad this season. He really feels like the best way to deal with the Jane situation is for [her] to just disappear. He becomes extraordinarily anxious about her being around, and it’s really fun to see our guys go up against the CIA.

What do you think, Blindspot fans: Is Jane really Taylor Shaw? And what are your thoughts on a potential Jane/Weller romance? Tell us in the comments!