For argument’s sake, you could say Alicia is Serena Williams and Eli is Roger Federer — they’re sometimes down, though never, ever out — but there’s no guarantee some upstart won’t come along and bump out one or both of ’em with a singular display of power and finesse.

Ruth Eastman. Jackie Florrick. Some scrappy FBI agent whose name is up for debate. Diane Lockhart. Even Howard Freakin’ Lyman (AKA He Who Naps in His Boxers). They’re all capable of a big win on any given day — and with the ever-changing political and interpersonal seeds sown by showrunners Robert and Michelle King, there are so many possible outcomes that even the most educated guesses often fall short.

That’s my succinct way of pre-apologizing if I miss a key point or two in hitting all the important moments in “Cooked,” a twisted and deliciously twisty installment that once again puts multiple characters’ futures and freedoms on the line — while denying us the special sexual twinkle of Jeffrey Dean Morgan’s Jason Crouse. But let me not whine — you came here for a recap, yes? 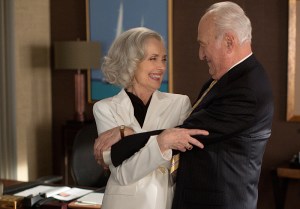 HOWARD, STERN The hour begins with Howard visiting Alicia’s home office and asking her to represent him in an age-descrimination suit against Lockhart-Agos, but while our heroine’s barely concealed eye roll says “Old man, pleeease!” she magnanimously sends him away with some solid advice: Work harder. And also take notes any time his Lockhart-Agos counterparts flash their ageism. In a bit of kismet, though, he bumps into Alicia’s mother-in-law Jackie on the elevator — and their spark is almost as immediate, definitely more overt, though possibly less hot than Alicia and Jason’s was last week.

At work, Howard suddenly seems more alert — “someone had a good nap,” teases Cary, as Howard gets lawyerly and makes him repeat it in front of the entire room — and after a date-night makeout with Jackie, he’s bringing to Diane, Cary and David Lee a $33 million annual account from the Food Service Union. The fact that he scored said deal with Jackie’s help leaves us to wonder if he’s really all that into her — or if he’s so shrewd that he’d play on a lonely woman to preserve his professional fortunes. If it’s the latter, here’s hoping Howard gets flattened by the collective weight of Peter and Alicia’s rage. Jackie may be a monster — but she’s their monster, after all. 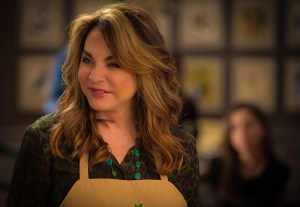 IF YOU CAN’T TAKE THE HEAT, DON’T HAVE A CAMERA IN THE KITCHEN | Ruth and her team argue that Peter needs to push a “family first” agenda — are they not aware he’s done jail time and has admitted to sleeping with prostitutes? — the better to cement a center-right tilt to balance Hillary’s campaign and make him her most likely Veep. Ruth also admits needs twice as many days as the six Alicia is promising in a two-month period, but it seems funny for her to ask Eli for his cooperation when she’s put him in a closet/office so small that the door hits his desk when it’s opened. (A little too on-the-nose/clichéd for a show as sophisticated as The Good Wife, no?)

Eli gets his revenge, though, when he follows Ruth’s wishes and pushes Alicia into an appearance — with her mother — on Mama’s Homespun Cooking. It’s supposed to show “generational post-feminist respect,” but it merely exposes the tense relationship between Alicia and Veronica (not to mention their lack of aptitude in the kitchen) in front of a large TV audience. It may be a loss for Peter’s fortunes, but Eli chalks it to the win column, and if he’s being genuine to Alicia with his advice that “You want to steer events, not have the events steer you,” maybe she’ll come out of this OK too? 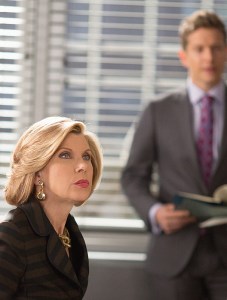 HELL HATH NO FURY LIKE DIANE SCORNED | OK, I’m not sure I fully support that theory, but damn, La Lockhart wears a power suit and a disappointed scowl better than anyone on television. You see, David Lee overhears Howard calling Alicia to discuss (dropping) his age discrimination suit — and the news couldn’t come at a worse time for Diane.

Irked by a young female intern’s concerns that Diane’s offer of a mentorship will interfere with the girl’s current romance, she brings to Cary the idea that they should siphon off some of their overflow business to Alicia as a show of support for their former colleague but also a way to keep her from joining forces with Canning. When Diane hears Alicia has been advising the ridiculous Howard on strategies for suing them, she shows up at Alicia’s office and sighs, “are you always going to be looking for ways to get back at me?” Alicia can’t tell her former boss/martini buddy how exactly she’s misjudged the situation — damn attorney-client privilege — but when she finally offers, “Diane, this is not what it seems,” Diane’s withering “Actually, sometimes it is” serves as a very final word. Are we ever going to see these two powerhouses — in their powerhouse suits — laughing at the bar together again? One can only hope/pray/send strongly worded tweets to @GoodWifeWriters. 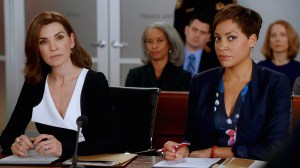 SOMETIMES THE CASE OF THE WEEK ISN’T JUST THE CASE OF THE WEEK |  Alicia’s bond-court client this week — a designer drug manufacturer named Roland Hlavin — puts her intermittently on the same side and then the opposite as her pal Lucca (who represents the distributor). It all gets more confusing than AP Calculus, but suffice to say Lucca gets pissed when Alicia decides they should split up their cases — after convincing Lucca to give up a plea deal that would’ve given her client only a year in jail rather than a possible 25.

What she doesn’t know is that Alicia’s client is actually an FBI agent whose case is all part of a sting operation to take down that cantankerous bond-court judge who’s been giving her hell all season. And since Alicia kinda sorta encouraged the agent to perjure himself under a defense scheme Lucca cooked up, she has no choice but to go along with his plan (or maybe wind up prosecuted herself).

Alas, though, Alicia tips off Eli about the wonkiness with her case before she realizes it’s a full-fledged FBI sting, and we learn at the end of the hour — after the judge rejects the bribe — that Eli had tipped him off. “I certainly owe you one,” says the judge. “Good because I need a little help with Frank Landau,” Eli says — and suddenly, Eli’s speech from earlier in the season (the one about not being Alicia’s friend, but just the help) comes flooding back to mind. How ugly will this all get for all parties involved? How much is Eli out for revenge — and does he care if Alicia is caught up in it all? These are questions — along with “Is Cary gay?” — that had better be answered between now and the holidays. Stay tuned!

OK, your turn. What did you think of this week’s Good Wife? Are you more anxious about the future of Alicia-Lucca or Alicia-Diane? And can anyone really trust a vengeful Eli Gold? Sound off below! 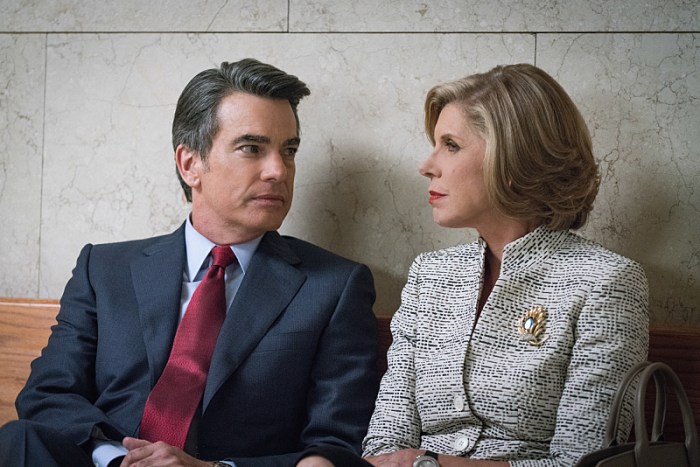