This week on ABC’s Once Upon a Time, we learned a whole lot about Camelot, the Arthur/Guinevere/Lancelot triangle and how the king was consumed with completing Excalibur. Our heroes meanwhile either got sandbagged by a spell or, if lucky, got to make out in a meadow.

As I look over my notes here for “The Broken Kingdom,” I am not surprised to see that a good 80 percent of them are about characters other than those from Storybrooke. And that was a problem. Basically, they needed to deliver the backstory behind Arthur’s obsession with Excalibur in order to service the “current” Camelot tale, but in doing so, the characters we know were off screen for massive chunks of time. Which is never a good thing.

Especially when I can sum it up this succinctly: So mad had Arthur become in his quest for the Dark One’s dagger, it drove a wedge between him and Guinevere — to the point that one day she decided to seek out the dagger herself, with Lancelot at her side. But upon butting heads with Rumplestiltskin, all they got for their trouble was a vial of the Sands of Avalon, which can “fix” anything.

Upon returning home and seeing Arthur’s mania — now amplified by his jealousy of Lancelot — displayed anew, Guinevere elected not to use the sands on Excalibur. Instead, Arthur grabbed the vial and used the sands to cast a spell on Guin, creating a Stepford Wife of sorts. He then used more sand (the vial is bigger on the inside?) to make the kingdom of Camelot “whole.”

In the “current” Camelot timeline…

Emma had a moment of weakness, goaded by Rumple to steal the dagger from Regina — but she held back, after which Hook soothed her. As Regina and the Charmings gathered around weak Emma, Charming explained how Arthur wants to make Excalibur whole, to vanquish the Darkness, while Snow White reported that Lancelot is alive and says Arthur is not to be trusted. In private, the Charmings quarrel some — she says he’s “starstruck” by the king and needs “to feel like a hero again.” Afterward, David confides in Arthur that they’ve been lying about daughter Emma, and he’s ready to reunite the dagger with Excalibur… except the box is empty. Turns out, Snow has the dagger and, with Lacnelot, plans to hide it beyond the door at the bottom of the Dark One’s vault. Arthur shows up to steal the dagger from the two of them, but when he uses it to summon Emma, he realizes it’s a fake. Charming then shows up to get the drop on Arthur, revealing that, yes, he and Snow fought, but they put their differences aside to focus on Emma’s well-being and thus set this sting in motion.

Alas… the Charmings don’t get to be clever for the entire episode.

For no sooner have they detained Arthur inside Granny’s than Stepford Guinevere shows up with the troops, to rescue the king and enlist the Charmings in their cause, by using more Sands of Avalon on the marrieds. The spellbound Charmings then lie to Regina about “Arthur good! Lancelot bad!” and say they need to marry the dagger with Excalibur. Meanwhile, imprisoned Lancelot makes the acquaintance of a spunky cellmate — Merida — who’s all too happy to take on Arthur.

As for the Dark One herself, 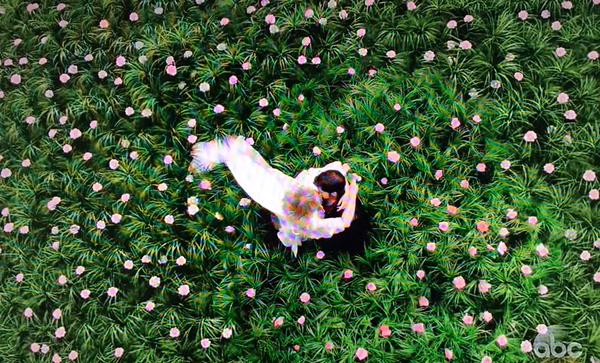 Emma keeps seeing visions of Rumple, so Hook suggests they go for a horseback ride through the countryside (after they spy on lovelorn Henry meeting up with Violet at her family’s stables). Upon arriving at an idyllic meadow rife with flowers, Emma indeed is no longer haunted, as she and Hook fall into a long, passionate and gorgeously directed kiss.

It is only then that we finally return to present-day Storybrooke, where Dark Emma has Rumple strapped to a gate. He insists, “I can’t be the hero you want,” but she sees him as a “dull knife” that simply needs sharpening — via her “secret weapon,” Merida, who has been tied to the Bug’s front fender. Dark Emma gives the sassy Scot her mission: to make a coward “brave.”

What did you think of “The Broken Kingdom”?