You might be surprised to hear that Tyra Banks — host and executive producer of the new daytime roundtable talker FabLife — disappeared 20 minutes into Friday’s episode, and only returned with five minutes left for a “Bye, y’all!” sign-off.

Maybe, though, she simply didn’t want to bear witness to one of the worst art projects in DIY history. Or perhaps she was experiencing gastric distress from a cayenne-infused bacon that food “expert” Chrissy Teigen claimed to have concocted, then refused to sample. Or perhaps — like Julia Louis-Dreyfus in those ubiquitous Old Navy ads — she couldn’t wait another moment to go shopping for “asymmetrical pants” (a topic so hot, it took up the opening four minutes of the episode).

The trouble with the freshman roundtable talker — fashion maven Joe Zee, interior designer Lauren Makk and “home” expert Leah Ashley complete the team with Banks and Teigen — is one that plagues much of daytime TV in 2015: Just because you have an hour of airtime and a camera crew doesn’t mean you necessarily have anything profound — or even accurate — to say.

Friday’s hour contained at least a half-dozen gasp-inducing gaffes. Teigen, a Sports Illustrated swimsuit model who’s married to John Legend and enthusiastically overshares on social media, is the purported foodie of the group. But in an unappetizing segment presenting “flights of bacon,” she admitted she didn’t know the meaning of the term “applewood-smoked” until she’d gotten her script that morning. 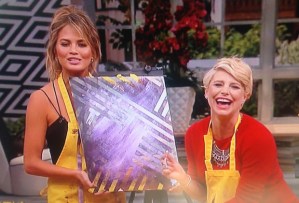 Makk’s how-to demonstration about freshening up old artwork using tape and acrylic paint devolved into something so macabre it wouldn’t have been out of place in a sequel to Hostel or Saw. Words can’t really express the mess Teigen made of her canvas, so I’ve included a screen grab that raises the question: Couldn’t any pre-schooler in your extended family or circle of friends do better?

Even when the hosts get something right, their “knowledge” is so banal you can actually feel your brain turning to pudding just from trying to soak up the dimness. Ashley’s game of trying to get her co-hosts to guess the price of various homes based on photo and square-footage alone included her earnest declaration that, when one sees “a lot of renovations in the neighborhood, that’s why prices are going up.” (Banks, for her part, went on an extended riff about how saying the word “bacon” causes one’s lips to move into a smiling position — and therefore would make a better pre-photo exclamation than “cheeese!”)

Zee’s makeover of a single mother of five was no different from any other audience-ambush that’s been done on daytime for years, set apart only by his breathless exclamation that “the whole idea of gender fluidity is a big trend right now” — and his aghast response to his subject’s penchant for tennis shoes. (How DARE she!) In Zee’s defense, the segment ended not only with the harried woman getting a new wardrobe (for free) but also Zee’s look-book of ways she could mix and match the components. Too bad he couldn’t leave well enough alone, adding “Emergen-Zee! Like Joe Zee! Get it?” (Methinks dude’s yellow binder emblazoned with the words Emergen-Zee was all the clue we needed.)

The good news for FabLife is that, unlike some of its competitors (hi there, The View), none of its panelists look like they’re fantasizing about jamming a butter knife into a co-worker’s hands. The bad news is, if you have enough grasp of the English language to read this paragraph, any one of your brunches with friends/relatives/co-workers is almost certainly funnier and more informative than what Banks & Co. are currently serving — and I’d bet your sriracha-brown sugar bacon comes out crispier, too.

Are you watching FabLife on the regular? What parts of the lineup are working — and where does it need a makeover of its own? Hit the comments with your thoughts!