I know that the Evos on Heroes Reborn are responsible for saving the world and all that… but as of Episode 5, they’re not making a great case for their ability to protect humanity from extinction.

How is Tommy Clarke supposed to fulfill his Earth-rescuing destiny if he can barely handle the revelation that he was adopted? How can Malina save the planet if she can’t manage to defend herself against The Shadow? And why did Luke have to burn down a perfectly nice house just to prove a point?

Perhaps some insight can be found in the details of Thursday’s episode, recapped below:

MIDIAN, COLO. | Following Molly Walker’s abrupt suicide last week, Noah, Quentin and Taylor hatch a plan to get answers from Erica about why Evos are being treated like lab rats at Renautas. In order to lure her mom back to their house, Taylor calls up Erica and delivers a phony tearful apology, begging Erica to come home so they can talk out their differences. Upon arriving, though, Erica soon realizes she’s been played when Noah and Quentin emerge from another room. Noah — who is desperate for answers, just like those of us watching from home — asks Erica if she killed Claire, but the Renautas CEO maintains she had nothing to do with the demise of Noah’s daughter. (She also insists that Hiro Nakamura died at the Odessa summit, and “you can blame Mohinder Suresh for that.”)

At long last, it seems as though we’re about to get an explanation for why Noah’s memory was wiped by The Haitian… but just as Erica is about to spill the beans, Harris interrupts the conversation, holding Noah at gunpoint and carrying Miko’s sword. 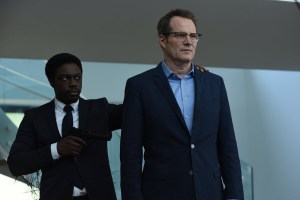 Oh, right: Speaking of Miko, she and Ren have spent most of the afternoon avoiding Harris’ E.P.I.C. tracking software, which is made easier by the hundreds of Evernow players who are dressed up like Katana Girl on the streets of Midian. When Harris drives off to Erica’s house with the sword in his SUV, Ren tosses his phone into the vehicle, as well, so he can track where Harris travels via GPS. It’s no surprise, then, that Miko makes her way to Erica’s house and kicks a little butt before stealing back the sword that was taken from her. When she meets back up with Ren outside the house, they do an adorable little victory dance for Miko’s retrieval of the sword… just before Miko goes back into her video game world, in order to save her father.

Meanwhile, once the confrontation at Erica’s house winds down, she and Harris (and one of his clones) return to Renautas’ headquarters, where they further discuss their plan to wipe out all of humanity. (See, earlier in the episode, Noah, Quentin and Taylor stumbled across a seed bank in the Renautas lab, quickly realizing that the Big Bad Corporation plans to repopulate the planet… after they wipe it out first.) Erica chats with an associate about their timetable for making Earth go extinct, and the employee sheepishly admits that it should take effect in less than a week. Pointing to a computer simulation, it seems a red-hot ball of solar radiation is headed right toward Earth, and according to Erica’s minion, 96 percent of all species will be wiped out when it hits the planet. Erica’s response to this grim news? “Starting over is never pretty.” So, yeah, she has no soul.

So, it seems we now know at least one aspect of the Evos’ mission: Stop the planet from being consumed by a giant fireball. Easy!

* In St. Pierre, Quebec, Malina and Farah continue their journey on foot, and Farah goes off on her own to conduct a meeting with someone seemingly important and helpful to their cause. Her contact never shows, though, and the only person who does appear is a Harris clone with a few Renautas baddies tagging along (including Phoebe Frady aka The Shadow, whose ability to conjure darkness is far more powerful than anything Malina can do). Malina and Farah soon realize that Harris’ E.P.I.C. eyewear can help him locate Evos — even Farah, who can make herself invisible — and though they try to outrun the men, it’s a futile effort. Farah is eventually gunned down by Harris, but she manages to hand Malina an envelope before she dies, ensuring Malina that the packet contains all the answers she needs “for when the time comes.” (Just curious: Can there be an Evo whose sole power is to decode these insanely cryptic warnings?)

* After getting tracked down by the anti-Evo authorities in Carbondale, Tommy is forced to register as an Evo, which includes an inconvenient tracking device inserted into his arm. That turns out to be the least of Tommy’s problems, though, when a detective informs him that Anne isn’t his real mother. That’s right: Tommy is adopted, and he’s pissed that his mom has kept the truth from him all these years. 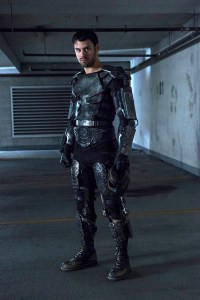 When he teleports back to the hospital, Tommy confronts his mother about the secrets she’s kept, and she insists that she wanted to tell him the truth, but there was never a good time. They’re soon interrupted by Casper Abraham (aka The Penny Guy), who admits that he’s been tailing Tommy for a year and finally shares the reason: “You have a destiny. Humanity has one last hope for survival, and part of it rests on your shoulders. You’re going to help save the world.” (So, like, no pressure or anything.) Tommy, unable to cope with the burden of pulling humanity back from the brink, teleports out of the hospital real quick… and that’s the last we see of him in the hour.

* In Los Angeles, Carlos returns to the garage to find that Jose and Father Mauricio are missing. Smelling a rat, he pays the LAPD a visit and accuses Capt. Dearing of kidnapping the two men. But Dearing has a bigger problem on his hands: When two of his Evo-hating co-workers receive E.P.I.C. glasses in the mail, they take the eyewear for a test drive and find that Dearing himself has powers — so, naturally, they beat him, tie him up and throw him in the back of a van. Carlos, decked out in El Vengador gear from head to toe, is able to get Dearing away from his creepy co-workers by stopping their van in the parking garage… but he won’t untie the police captain until he reveals where Jose and Father Mauricio are being held.

* Last but certainly not least, Luke returns to the home he shared with Joanne in Rochester, N.Y. and proceeds to go down a rabbit hole of heartache, revisiting old photos and home movies from the years when his son was alive. The memories wreck him so much, in fact, that he calls up his former colleague, Don — with whom he owned a dental practice, it seems — and asks the man to cut him a check for Luke’s share of the practice. Don asks if Luke is making a change or retiring, but Luke will only say that he’s “atoning.” Later that day, he sets fire to a picture of Joanne and his son (with his hands, because he can!), takes off his wedding ring and leaves the house to go up in flames. But… but… that kitchen was so nice!

With that, I hand it over to you. Your thoughts on Thursday’s Heroes Reborn? Drop ‘em in a comment below.