The N Word. The debate over gun control. Clogged arteries.

These topics would probably all score Big Red Xs on a Family Feud survey of “funniest sitcom topics.” Yet in its provocatively bold second season, ABC’s black-ish has tackled ’em all — and in the process, become one of the best comedies on television.

This isn’t to suggest that black-ish has entered Afterschool Special territory: Not with moments like Jenifer Lewis’ eternally indignant Grandma Ruby huffing “Can you believe this n—-r?” after son Dre (Anthony Anderson) schools his parents on the way his generation has claimed the racial epithet “as a term of colloquialism and power.” 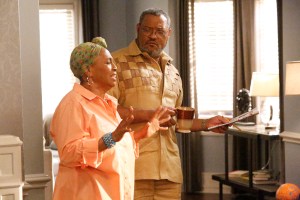 In other words, it’s a tightrope walk, what creator Kenya Barris and the black-ish team are attempting, with high-minded topics of national conversation on one side and “Am I allowed to laugh at that?” punch lines on the other. But there hasn’t been a single misstep — a moment where you feel like the show’s writers are going there for mere shock value — over the first four episodes of the season.

The season’s second outing, “Rock, Paper, Scissors, Gun,” finds Dre and his wife Bow (Tracee Ellis Ross) vehemently (and hilariously) disagreeing about whether to buy a firearm after a string of neighborhood robberies. There are scathing one-liners (“If you shoot the way you pee, then we’re all gonna be dead!”). There are utterly absurd visuals (a confused, elderly Asian woman cocking her newly purchased rifle over and over again as an ambivalent shopkeep offers, “Honestly, it’s mostly about confidence. Have fun!”). There are even unexpected/believable twits (Bow pulling an about-face and shouting, “Get the gun – and don’t stop pulling the trigger until your finger cramps!” when it appears there’s an intruder in the Johnson home). 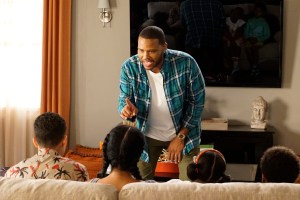 black-ish‘s not-so-secret weapon is its multi-generational cast. Anderson’s Dre is wonderfully reactionary, as evidenced by a weeping meltdown in Episode 3. (“My daddy’s dead!” Dre cries, after a child’s balloon explodes in a crowded hospital waiting room, and makes him imagine the same disaster for his father’s balloon angioplasty.) Ross’ Bow balances educated-hippie charm with exasperated mother realness. As Dre’s parents, Lewis and Laurence Fishburne manage to delight while deliver sometimes garishly un-P.C. points-of-view.

Even the Johnson kids (Yara Shahidi, Marcus Scribner, Miles Brown and MVP Marsai Martin) and Dre’s absurdist co-workers (especially Peter Mackenzie as possibly sociopathic bossman Mr. Stevens) score their fair share of laughs — while contributing to the underlying political vibe. “There’s so much I don’t know about him… First kiss? Secret crush? Is he pro-choice? Anti-fracking? Where is he on Sea World?” asks eldest son Junior when he learns his grandfather needs surgery.) 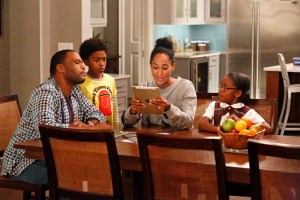 But with upcoming installments exploring religion (the Oct. 21 episode explores the Johnsons’ status as lapsed churchgoers) and class (on Oct. 28, Dre’s poor relatives create tension when they descend on his neighborhood for trick-or-treating), it appears that black-ish will keep pressing the pedal during its stellar sophomore season.

If that notion doesn’t scare you — or even if it does — then it’s time to start watching (or at least DVRing) black-ish on Wednesday nights (9:30/8:30c on ABC). Just as certain as Pops’ declaration that a Baby Bjorn is “that little half-bra with a baby hanging out the front,” it’s one of the most consistently funny (and arguably important) shows on TV right now.

Are you watching black-ish? And where would you rank its second season among current comedies? Sound off in the comments!