When Andre Lyon finally writes his tell-all memoir — let’s say during Season 26 or 27 of Empire — he’ll have no shortage of killer titles from which to choose: Can’t See the Carcass for the Trees; When Push Comes to Shovel; Are You There, God? It’s He, Andre; The Return of the Man Who Killed U.N.C.L.E.; How to Un-bury a Millionaire. And the ideas just keep on coming! (Feel free to add to the list down in the comments.)

But let’s not throw a pity party for the eldest Lyon son. Sure, he had to dig up the months-old corpse of poor Uncle Vernon to ensure his father’s freedom (and his own corporate future), but look on the bright side: He got the orders via direct message (in his head, not on Twitter) from God himself, and learned his wife Rhonda is the literal definition of “ride or die.” Plus, when it was all said and dug, Andre won back his position of CFO of Empire Entertainment — and learned about the existence of what’s essentially a metal detector for dead bodies. (The more you know…)

While Andre was definitely the star of “Poor Yorick,” his family had more than enough drama of their own: Hakeem almost took a baseball bat to Jamal’s head (and possibly discovered a new frontwoman for Mirage a Trois); Cookie beat Roxanne Ford at her own game; Jamal transformed himself from artist to art itself; and (speaking in record-label terms), Boo-Boo Kitty got shelved — with no release date. Let’s recap! 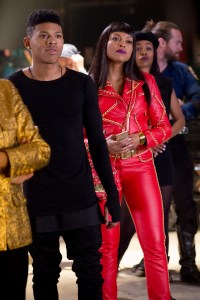 SNITCH BITCH? | The FBI raids both Empire and Lyon Dynasty HQ, as D.A. Roxanne “MiracleBra” Ford continues her quest to take down Lucious. But she uncovers one spread sheet she didn’t expect when Lucious greets her butt-booty nekkid in his bedroom, sneering, “Hi there, baby. Look wherever you like.”

Thirsty — inexplicably guiding the family’s legal strategy in a wide ’70s necktie — insists Lucious, Cookie and their kids need to publicly present as “one big happy family,” the better to influence public opinion. And Lucious’ insistence that the FBI raid just makes Empire look more raw and dangerous quickly convinces Mimi that her quarter-billion investment is totes safe. “This is how playas play to win!” shouts the cancer-surviving mogul, before high-fiving Papa Lyon. (File under: Things you never could’ve seen coming.)

Roxanne, though, gets Cookie brought down to central booking an old warrant (involving Porsha and a jumped turnstyle) — and Cookie’s “If I die in police custody, I did not commit suicide!” proves both LOL- and chill-inducing. Our fabulous, red-leather-clad matriarch experiences some incarceration-induced PTSD — but, eventually uses it to her advantage, telling Roxanne that Lucious and Bunkie’s beef pertained to the Apex Sattelite Radio deal. A giddy Roxanne promises to dig deeper into the merger — essentially rendering it dead in the water — and the vibe is so congenial that Cookie apologizes (!) and tells her her weave is “nice.” (!!) Then Roxanne is all, “So is your wig.” Good thing Cookie’s playing the prosecutor like a Stradivarius, or I’d shout “Objection: Out of character!” at the imaginary judge. That’s not the final Roxanne scene of the hour, but more on that in a moment… 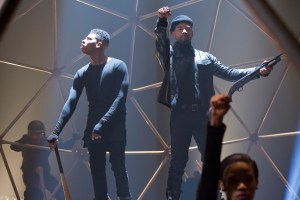 BROTHERS AT ARMS | Despite being signed to opposing labels, Jamal and Hakeem agree to work together on the video for “Ain’t About the Money” — a detente brought about during a hilarious, contentious meeting between Lucious and Cookie (“Tell me a grandma that’s got an ass like this!”)

At the shoot, though, everybody goes and makes things more complicated than an Avril Lavigne single. Lucious presents Hakeem with a custom-made beat, one he can only access if he returns to Empire. Mimi shows up to sip champagne and absorb Cookie taunts like, “Uh-uh. White bitch, you gotta go!” And after the video gets upstaged by renowned artist Chase One showing up with a new painting of Jamal, Hakeem has a tantrum, declaring it “the most ugliest painting I’ve ever seen in my life” and then jamming a knife right into the canvas. Is it a shock, then, when the final shot of the video ends in unchoreographed fisticuffs. (If Cookie hadn’t been in lockup, you know she’d have ended the sibling silliness with a broom and a couple of choice zingers, K?)

Hakeem winds up feeling bad about it, pouting into his drink at a jazz bar. But before he can hit “Send” on a “Sorry, bro!” text, his ears get enchanted by an amateur singer named Laura, offering a Spanish-language cover of “Blue Bayou” so pretty it’d make Huckabee and Sanders sway in time to the music. 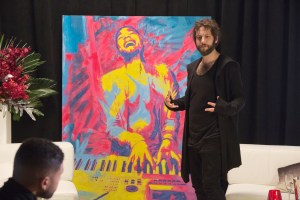 LOVE IS WAR-HOL | So, yes, we already talked about Chase One and his Warhol-esque rendering of Jamal The Artist. Did I mention he drops waayyyyy obvi double-entendres like “I wanna be inside you” and “God you’re gorgeous” to Jamal — right in front of a silent, seething Michael. (Has boyfriend learned nada from Cookie?) Chase doesn’t even flinch when Hakeem defaces his painting, cooing that “art is fluid, ephemeral” and making me think he’s thinking about some other fluid, ephemeral activities he’d like to do with Jamal. I don’t get the scraggly hair and unkempt beard and black tunic-y garb, but I’m currently wearing shorts by Old Navy, a t-shirt from Target and socks from BJ’s (I know, I’ve given up at life), so what do I know?

CAN YOU DIG? | Lucious continues to have scary flashbacks to his glassy-eyed mother and their visits from child services every time his manic-depressive son comes extending an olive branch. Finally, Andre asks the big question — “if I can make this [FBI probe] all go away, will you let me back at Empire as CFO?” To which Lucious, ever the opportunist, is all “and then some!” 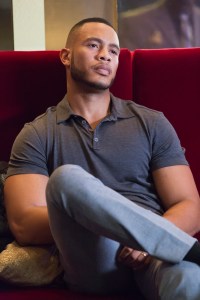 So Andre goes home and tells Rhonda that God’s been speaking to him, that he needs to dig up Vernon’s body, and thereby prove the FBI has no star witness left claiming Lucious killed Bunkie. Rhonda, powered by love or self-preservation or both, goes along with — and five feet down into the ground, she realizes that while they went in knowing Vernon was buried in front of the tree with the hole — whoops! – all the trees have holes… dun dun dunnnnn…

Lucious and Thirsty — who put a tracking device on Andre’s car — suddenly appear in the woods and help the homicidal couple finish their job. Andre takes a moment to stare into the trunk and apologize to the man whose care and kindness helped him become the man he is today (brilliant, rich MBA — not emotionally disintegrating accomplice to murder). Lucious has a message for his dead buddy, too: “You will rot in hell, you snitch!” But first — his body has to be put in Roxanne’s passenger seat… because so what if that’s the kind of foolery that puts your whole plan at risk. A good scream from the bad witch in black is a victory all its own. 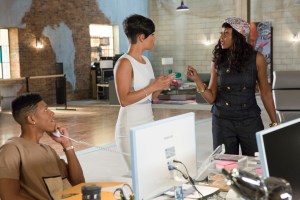 ANIKA PINK-SLIPPED… AGAIN! | Cookie continues to freeze Anika out of Lyon Dynasty — but then makes her rival an offer. If she can sign Royal T to the label, she can get back on the payroll. Only — whoops! — after a conversation with Lucious, Cookie changes her mind. Sure, she says, she knows Anika is telling the truth and Lucious is lying about wanting Anika to steal Cookie’s masters, but Cookie simply can’t trust Boo Boo. I think her logic is essentially, “At what point will the power shift and Anika will betray me?” and that makes sense. But with orders like “Don’t show up to my studio again,” where does it leave Grace Gealey’s lovely alter ego in our story? (This troubles me, Empire fans!)

Anyhow, what did you think of this week’s Empire? How badly will this end for Andre? Hit the comments with your thoughts!