It was every Chanel for herself during Part 2 of Scream Queens‘ Halloween trilogy on Tuesday, as Hester — who I’m pretty sure is becoming more bats–t with each passing week — worked her magic to land No. 1 behind bars for Ms. Bean’s murder.

Of course, this being Scream Queens, Emma Roberts’ character was locked up for all of five minutes before being bailed out by No. 3 and Predatory Lez (which was kind of a bummer. I was looking forward to a full-on Orange Is the New Black situation.)

As payback for her (alleged) treachery, Chanel No. 5 — who I’m fully rooting for as the next victim — was put on jack-o’-lantern duty in the Shining-style pumpkin patch. I got excited when the Red Devil showed up, but my hopes were quickly dashed when he took out one of the “Eiffel Tower” twins, allowing No. 5 to make a run for it. (Better luck next time, R.D.! Seriously.) 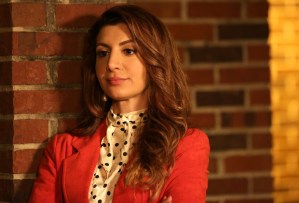 But it’s the episode’s final scene that will likely have viewers talking tomorrow… or whenever they eventually get around to watching it on their DVRs or online. Could Gigi really be the mastermind behind all of the Red Devils?! (I was starting to doubt whether she even had a mind to begin with, to be honest.)

MAYDAY, ZAYDAY! | Though Grace and her rag-tag band of Scooby gang wannabes failed in their Zayday rescue mission — she got away all on her own — they did manage to stumble upon the Red Devil’s lair, where Gigi and Denise Hemphill engaged in a game of blind tasing. (Man, why couldn’t Chanel No. 5 have been there to play with them?) The group’s journey into the pit yielded little fruit, though we now know one of the Red Devils is maybe in love with Zayday, which might be a clue. Or not.

STEPMOMMY DEAREST | In relationship news, Wes and Gigi officially announced their coupledom after Grace caught them porking to the sweet sounds of “Black Velvet.” She eventually made peace with her dad’s new squeeze, but I think it’s fair to say that Dean Munsch won’t be accepting the happy couple anytime soon. (In other relationship news, it turns out that even Denise Hemphill has slept with Chad Radwell. She told him, “You got the right to remain sexy,” an encounter I would have paid any amount of money to see with my own eyes.)

Scream-ers, do you think there’s more to Gigi’s interaction with the Red Devil than meets the eye? Which Kappa are you hoping will be the next victim? Drop a comment with your thoughts below.