Eight years ago this November, the Writers Guild of America went on strike, a 12-week work stoppage that ultimately scored scribes (among other things) a piece of the growing digital-media pie, but also would come to be blamed for derailing shows such as Heroes and Pushing Daisies while allowing unscripted “reality” programming to gain a firmer foothold in the TV landscape.

The project starred Neil Patrick Harris (who at the time was in the midst of How I Met Your Mother Season 2) as the titular wannabe supervillain, plus Whedonverse alumni Nathan Fillion (between his Desperate Housewives arc and Castle debut) and Felicia Day (who as creator of The Guild knew a thing or two about web series), playing arch-enemy Captain Hammer and love interest Penny. Simon Helberg (The Big Bang Theory) co-starred as Horrible’s lamely powered pal, Moist.

TVLine spoke with Joss Whedon and his Horrible leads, just prior to their Saturday night Q&A at The Paley Center for Media’s Dr. Horrible’s Sing-Along Blog reunion event, where they reflected on the ambitious (but not overly so) enterprise, shared budget-cutting secrets and pondered where their characters are now.

A HORRIBLE IDEA IS BORN | Whedon had the idea for Dr. Horrible 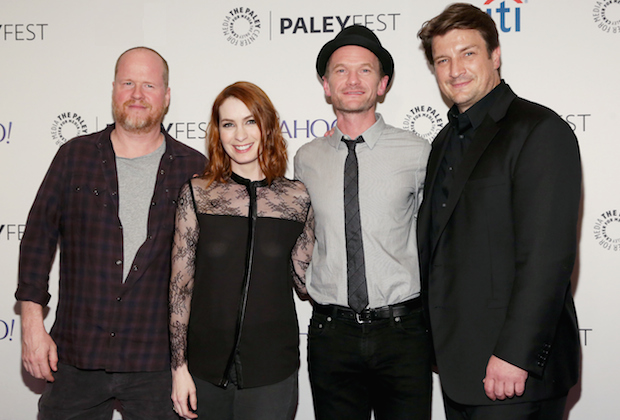 — or, “a weird sort of autobiographical study of someone’s descent into madness” — before the WGA strike hit. Whedon initially shopped the project as part of a deal he had with Amazon, but even he cops to halfheartedly pitching it a la “‘And here’s the one you’re not going to want.’ And they were like, ‘Yeah, we don’t want that.’ So we did it ourselves, and by the time we got rolling the strike was over.”

While Dr. Horrible is often hailed as a shining example of what can accomplish without the backing of a major studio/outlet, Day herself had already braved this territory, with the gaming-themed series The Guild. “If we were pioneering, she was our guide,” Fillion says. “She’d already done it, she knew what she was doing and she’s got social media by the balls.” As such, “We certainly weren’t the first,” Fillion notes. “But were we notable? Yes, indeed.”

SING… SING A SONG | Yet despite Day’s experience as a web series auteur, the role of Penny would present a first for her, as well. “I did a lot of musicals when I was a teenager, and I took opera lessons in college, but as far as singing on camera, this was my debut,” she confirms. And given her costars, “I was terrified,” she admits. “I mean, if you’re working with Neil Patrick Harris and Nathan Fillion and you’re just a girl from the Internet, I’m sorry, you’re intimidated all the time.” In retrospect, “They raised my game a lot, and taught me how to behave better,” Day shares. “Not that I behave badly, but they showed me how a consummate actor works.”

In casting Dr. Horrible‘s few roles, Whedon quips, “I just would not take yes for an answer,” instead meeting everyone’s immediate OK with reasons why they may wish to reconsider. He also cops to being “nervous” tapping NPH for the title role, saying, “I didn’t know him that well at the time.” As Harris remembers, “I’d done Shakespeare a few times at Joss’ house, and we have tangential friends…. And I think we kind of wanted to work with each other in theory.” The advent of Dr. Horrible however made their theory reality. “I guess doing a low-paying Internet musical kind of limits your talent options,” Harris laughs. “You can’t get Robert Downey, Jr.!”

Speaking of the web miniseries’ budget, the cast vividly remembers instances of keeping things lean and mean during the quick shoot. “One evening, shooting went late and they still had one more bit to shoot with Neil as he sang a song,” Fillion shares. “The [natural] light was gone and they hadn’t rented any, so somebody pulled out a flashlight and held it up high. We shot the scene lighting Neil’s face with a flashlight.” 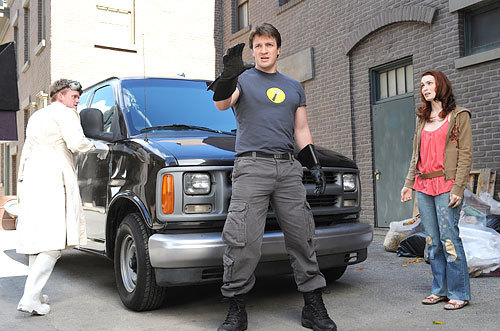 Day meanwhile once fortified the craft services snack table with a bounty of sweets she had bought using her own money… at a sketchy Korean bakery. “They had all these weird, strange, awesome desserts…. And then everyone got sick, so… That was a good story,” she flatly remarks.

IS THE DOCTOR BACK IN? | Is there more Horrible fun to be had one day? Whedon over the years has hinted at a follow-up, though his recent adventures in the Marvel Cinematic Universe have owned his time. Harris, Fillion and Day, meanwhile, never seem lacking for things to keep them busy. Still, Whedon says that another Sing-Along Blog is more likely to happen than, say, new Firefly adventures — for reasons both practical and pragmatic. “There are fewer [cast members to rally], which is very important,” he notes. “Plus with Firefly, I worry about the Monkey’s Paw. Wishing for it and then having it be no good frightens me.” Dr. Horrible in turn “can become something else and be just as delightful.”

So, where might the not-so-good doctor and his well-coiffed arch nemesis be, some eight years later? Fillion reckons his alter ego “is probably redesigning his costume to reflect a new kind of ‘hammer,'” while Harris has no doubt at all that Billy’s fiendish alias is no less than “taking over the world,” as a member of the Evil League of Evil.

“Do you really think I would answer in the opposite?” Harris marvels when asked of Dr. Horrible’s fate. “I’m here standing at the Dr. Horrible panel! If I told you he was some sad guy working at a laundromat, that would be a terrible answer! So yes, he’s dominating!”