This Sunday on ABC’s Once Upon a Time, Emma popped a question at Hook, Belle got an eyeful, a new villain made himself known and a “dead” friend resurfaced.

After moderating the Once panel at New York Comic-Con on Friday — at which we screened this week’s episode, “Siege Perilous” — I asked series co-creators Adam Horowitz and Eddy Kitsis about the biggest twists, and what’s next.

WILL EMMA TAKE ‘NO’ FOR AN ANSWER? | Challenged to profess his feelings, one way or the other, for newly Dark Emma, Hook answered, “I loved you,” past tense. Will she let that stand or push the issue? “Her next move is a well-placed mixtape,” Kitsis quipped. “No, Emma’s next move is more like Hook is going to make the next move, finding out who she is. Hook has spent a long time pursuing a Dark One and thus knows a lot about Dark Ones, so his main goal is saving Emma from herself.” As evidenced in one of the producers’ favorite moments from the episode — when Hook sees through Emma’s romantic machinations and asks what the Dark One is after — “The internal conflict remains a huge thing for her,” Horowitz said. “She is dark, but she does have feelings for Hook, and those things are at war within her and really are pushing her in the action she’s going to be taking next.” 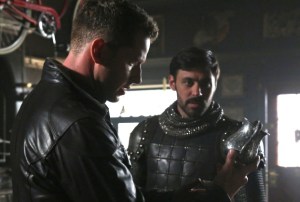 ALREADY MOURN THE CHARMING/ARTHUR BROMANCE? | After all, it has been revealed in both timelines that the king is not as noble as he may seem, having pinched the crimson toadstool from Charming during a Camelot quest and now pulling the wool over the Storybrookers’ eyes, even if it means sacrificing the occasional pawn along the way. “It’s a tricky one,” Kitsis noted, “because you can tell that Arthur and Charming would be best friends in another world. But Arthur is doing what he thinks is best for his kingdom, and Charming has to do what’s best for his family, and that’s going to put them at odds.” Added Horowitz, “Arthur isn’t a villain in the pure sense of villains that we’ve had before. What we saw is what we’ll continue to see — a man who’s really conflicted and is driven by doing what he thinks is right, and what he thinks is his destiny.”

LANCELOT IS ALIVE? DID WE KNOW THAT…? (IT’S ALL VERY CONFUSING.) | Horowitz, at my request, recounted how in Season 2 it was revealed that the Lancelot with whom Snow White reunited was actually Cora using a glamour spell. Regina’s mother then gloated that she had killed the brave night. Or was she full of hot air? “A lot of that will be clear in next week’s episode,” Horowitz assured, when we take a deeper dive into the tempestuous affair Arthur told Charming about. “We’re going to learn a lot more about Lancelot’s past and the iconic love triangle involving him, Arthur and Guinevere.”

WHAT IS BELLE TO 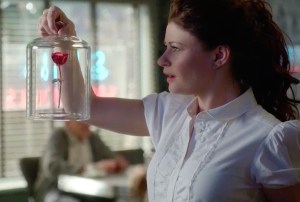 MAKE OF RUMPLE’S VANISHING? | For no sooner did the rose reveal to her that he was awakening from his coma, she arrived at his bedside to find him AWOL. Will Belle set out on a search? “Oh, 100 percent,” Kitsis previews. “She knows he’s been taken, she thinks Emma is behind it, and she’s going to go look for him…. Belle gets really strong this year.” Horowitz echoed that sentiment, saying: “Belle is activated now. She knows he’s awake and she’s determined to find out what happened.”

As for Rumple’s level of helplessness now that he has a clean heart/is a “blank slate,” Kitsis put it at a 5 (on a scale of 1 to 10). “He has no magic, but he carries the wisdom of everything he’s gone through,” the EP said during the panel. “At the same time, he still probably wants to run rather than fight.”