Castle‘s title star apparently cocked his own eyebrow upon learning that the ABC series’ new showrunners, Alexi Hawley and Terence Paul Winter, planned to break up Rick and Kate two weeks into Season 8, less than a year after their on-screen wedding.

“First of all, I asked them if they were high,” Nathan Fillion quipped to TVLine on Saturday night, at The Paley Center for Media‘s Dr. Horrible’s Sing-Along Blog reunion event. “Second, they reassured me that what was going was they wanted to get back to a time when people were rooting for the couple, rooting for them to get together, to do something.”

So with Beckett (played by Stana Katic) keeping her husband at arm’s length while she secretly pursues a deadly agenda — the search for Bracken’s high-powered partner — Castle is left to do what he can to “win her back” by, as sampled in last week’s episode, 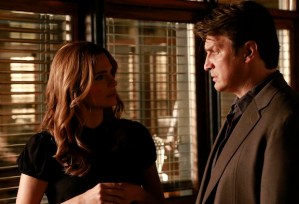 recreating the crimesolving camaraderie that first lit a fire under the couple’s “Will They/Won’t They” tension.

“People had a desire, a wont, for them to fight for something,” Fillion observes. And in finding this way to restore that dynamic, “I think [the showrunners] did a really good job.”

Asked how Castle will be different with its marrieds now separated, Fillion pointed to a return to the procedural’s lighter days/episodes.

“One of the things that Terence and Alexi are really big on, and I agree, is they don’t consider Castle to be a drama,” Fillion said. “It’s never been much of a drama; it’s far more a comedy with dramatic and heartfelt moments. And they wanted to bring it back to a time when it was funny, when it was great, when it was the lighthearted show that everybody fell in love with.”

And if this new set-up — Rick operating as a private eye, with daughter Alexis’ assistance, while Beckett, Ryan and Esposito chase cases — means better “utilizing the wonderful, talented actors we already have on the show,” that’s the best of all worlds, Fillion said.

As for the other shoe yet to drop — the next “shift” to come for Rick and Kate, in the fall finale airing Nov. 23 — Fillion had nada to tease: They haven’t told me yet, so you already know more than me!”