How to Get Away With Murder fans, fret not: Showrunner Pete Nowalk promises he’ll avoid the sophomore-season pitfalls of another popular mystery series, HBO’s True Detective.

In other words, when it comes to Season 2’s central mysteries — Who shot Annalise Keating? And who killed the ADA prosecuting murder suspects Caleb and Catherine Hapstall? — you won’t be scratching your head asking “Who? How? Whaaa?” when the guilty parties are revealed.

In fact, Nowalk recalls that when the idea was floated of ending Season 1’s “Who killed Lila?” story arc by revealing the killer was some minor character who was only tangentially related to the action, he promptly nixed it: “I thought, ‘No, that would just annoy me if I was the viewer. I’d be throwing my remote at the TV.'”

TVLine caught up with Nowalk to break down the action from Thursday night’s hour — “It’s Called the Octopus” — and to tease some what’s in store in the coming weeks for Annalise and Wes, Asher and that doomed DA.

TVLINE | I loved the parallel scenes in Thursday’s episode: Annalise and Wes on opposite sides of her door, and then later, Nate and Annalise on opposite sides of his door. In both instances, I felt like it could’ve easily ended in sex. Did you write that parallel construct into the script? Or was that a choice your director made?
We did write that into the script. We stumbled upon the second one honestly. The initial one with Wes and Annalise was always there. Right now, Wes and Annalise are in the same boat, they’re both alone. They’re not two people who can just hang out. It’s an odd relationship. So [putting them on opposite sides of the door] felt very natural. And when we were writing the scene with Nate, we were thinking, “He can’t let her inside after everything she’s done to him!” [Laughs] I’m glad you noticed. Our director John Terlesky — he did an amazing job — it was very fun to watch for the first time.

TVLINE | We’ve talked about this before, but the Wes-Annalise dynamic — it’s maternal, it’s sexual, it’s mentor-mentee — sometimes all at once. Are you headed into something romantic with them?
I don’t want to say one way or the other, because it’s really open to interpretation. Some people might look at that and see two very lonely, vulnerable people who need someone in their lives. And neither of them can reach out to the other. Some people might see sex in that moment. It can be all those things, and the characters are probably feeling different things in different moments. I don’t think any relationship can be pigeonholed into one thing. It’s a mentor-mentee — and it’s messy, especially given everything they’ve been through and the secrets they know about each other. It could go in any direction. 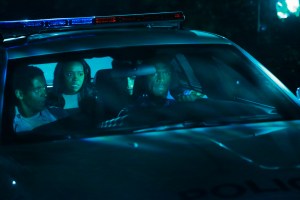 TVLINE | I did not see it coming when you pulled back from Nate’s door — and there was Wes. It’s clear they’re in cahoots in some way, but are we going to see a lot of interaction with them going forward or was this more of a one-off?
I don’t want to give it all away — but Wes is riding shotgun in [Nate’s] cop car in the flash forward. So, clearly their relationship goes beyond one night. It makes sense to me why Wes would go to Nate, of all people, to help find out if Annalise had anything to do with Rebecca going missing or dying. Who would would have more reason to look into Annalise than Nate? Wes hears Eggs911’s theory and then goes to Nate’s apartment. Wes is trying to use Nate to find out something Wes wants to know.

TVLINE | Wes is sometimes hard to get a read on.
A lot of the show, to me, is ‘Don’t underestimate people.” When Wes started law school he was more of a puppy — he has a dark past, a lonely past. That can come back and raise its ugly head in him sometimes, and make him distrustful of people. You can ask that about everyone on the show: Are they doing things for selfish reasons or good ones? It can be both. But Wes really wants to know the truth.

TVLINE | Does he think Rebecca is dead?
When Levi, or Eggs911, tells him, “I think Rebecca’s dead — and here’s why,” that hits home for Wes in a way that feels real. His gut is telling him that’s true.

TVLINE | I know you can’t spill what the heck is going on in the flash-forwards, but as we get flashes of Annalise with the bullet wound, Emily Sinclair at the bottom of the stairs, what should conspiracy-theorist, mystery-obsessed fans be looking for or thinking about?
Oh man! Obviously, I love when people come up with theories — and we are right now writing the episode where we reveal what happened that night. I’ll say this: If someone guesses it, I will hire them to come work in our writer’s room! [Laughs] Because it’s not easy. We like writing ourselves into a corner and figuring it out later. Who knows if we’ll be successful? But that’s half the fun. If you’re into the puzzle and love trying to figure it out — I don’t even know how you’re supposed to watch the flash-forwards. Let them wash over you, and know that you’re going to get an answer soon. You can try to figure it out, but it’s our job to make sure that you can’t. 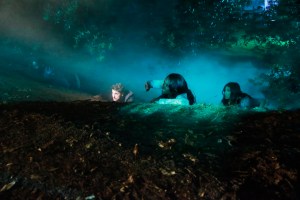 TVLINE | When you start the season, do you have an exact picture of X killed Y, Y killed Z? Or do you figure out these answers in the writer’s room as the season progresses?
It’s a combination of both. I didn’t even know I wanted to do flash-forwards — and our writers smartly said, “Let’s do them again.” They’re a big part of our show’s fabric.

We started [Season 2] with an image of Annalise bleeding out in that mansion. And we’ve been growing it from there in each episode. You only have to write one scene for the premiere, and I was like, “We can just change it later!” And then finally we shot it, and I said, “We sort of have to figure out what we’re doing!” [Laughs] Even yesterday, [the writers] discovered something we didn’t know about that night. Sometimes you kick yourself for having [previously] shot a certain thing — “Oh well, I guess now we have to make that work” — but that’s the process. We cross our fingers, close our eyes and jump. I wish I was a David Simon or some amazing writer who could say, “I know everything going in!”

TVLINE | I have to ask, were you a fan of Sarah Burns (who plays ill-fated prosecutor Emily Sinclair) when she was on Enlightened?
Exactly! I loved her on that show — and I loved that show so much! We didn’t audition Sarah for this role, because it was [initially] just for the finale last year. I didn’t know how much we’d use her this year or if she’d even been available. I didn’t know how much she could play the antagonist, but she’s really talented. I feel lucky that we randomly cast her. 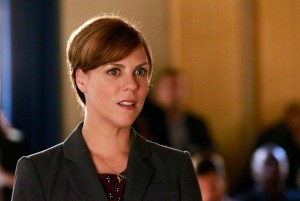 TVLINE | I’m assuming she’s dead at the bottom of the staircase in the flash-forward. Her eyes almost look gouged out — or is that just what happened when her head hit the ground?
I’m not gonna answer that. I like the theories, and who knows, maybe one will give me an idea? But no, it doesn’t look like she’s in very good shape at the bottom of the stairs. You’ll find out more and more as we dig into the story.

TVLINE | Did you ever worry if it was too soon to reveal her death — or debate holding that reveal ’til later in the season?
We debated it a few times. But once I like an idea, I like to just stick with it. Why is it too soon? What does that even mean? I figured, “This will make us really invest in and pay attention to this character.” Otherwise she’s just a random prosecutor.

TVLINE | Annalise’s “Why did they do it?” What can you tease about that line?
Why did she get shot? And why did the Hapstall twins theoretically kill their patents. It works on both levels.

TVLINE | Do you at this very moment know who shot Annalise and who killed Sinclair?
Well, right now, yes we do. It could always change. We have to write a script and it has to be shot. Check back with me once it airs and I’ll tell you! [Laughs] 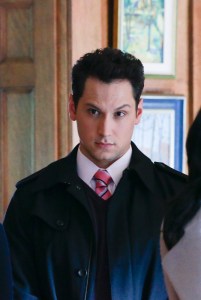 TVLINE | Let’s touch on Asher’s secret — which Emily is using to manipulate him into being a mole. How bad is Trotter Lake?
It’s bad. [Sighs] It’s really bad. It’s bad.

TVLINE | Is Asher responsible for whatever the bad act is?
It’s complicated. It will provoke a lot of discussion.

TVLINE | Any big guest stars coming up in the next few months?
Famke Janssen will be coming back. Annalise and Eve obviously have a really deep relationship. I’d feel bad if they never saw each other again!