“They’re different from anything the show has seen before, which is really exciting,” Elizabeth Blackmore, who plays Heretic Valerie, tells TVLine. “They’re going to have some issues adjusting into this new world, especially once they start interacting with the other characters who have already been here.”

In addition to clashing with the residents of Mystic Falls, the Heretics will also have their share of internal struggles.

“There’s lots of us now, and we’re all vying for Lily’s attention, but Valerie tends to be more of a loner in that regard,” Blackmore explains. “The others often leave her out, so she tends to be a little moodier. She’s an easy target” 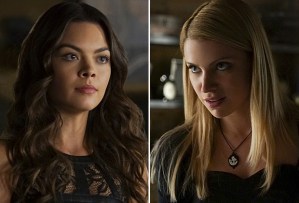 Two of the Heretics cutting Valerie out of their reindeer games are Nora and Mary-Louise, the show’s first same-sex couple.

“They’re very much a team,” Blackmore says of the ancient girlfriends. “It’ll be interesting to see them adjust to being in a time where they can be open with their relationship. All of the Heretics, though, have always been very accepting of them together. I’m really excited that the show has taken this storyline on.”

As for the impending violence — come on, you knew that was coming — Blackmore promises that the Heretics will live up to their horrifying reputation, teasing that “something happens to Valerie [early in the premiere] that snowballs and causes a pretty serious chain of events.”

Vampire Diaries fans, what are your early thoughts on the Heretics, and Season 7 in general? Drop ’em in a comment below.