The Vampire Diaries returned for its first post-Elena season on Thursday, introducing a whole mess of trouble — albeit very attractive trouble — for Mystic Falls’ finest.

TVLine spoke with executive producer Julie Plec about how the premiere’s twists will shape the rest of the season, but first, a quick recap: Damon, Bonnie and Alaric returned from their European bender — where Damon nearly let Bonnie die in order to get Elena back — to find that their home is now under the control of Lily and her “family” of Heretics. Damon chose a direct approach to the problem, ripping out beloved Heretic Malcolm’s heart, while Alaric chose to celebrate his return by visiting Jo… at the morgue.

Meanwhile, Caroline and Stefan’s attempt to eliminate the Heretics (did somebody order a bomb?) totally backfired, as Lily’s “children” not only survived the blast, but also ate most of Matt’s fellow police academy graduates. And although Caroline came clean to Stefan about how “happy” he makes her, that happiness was tragically short-lived; Enzo chose to side with Lily, kidnapping Ms. Forbes in the process.

Lastly, a three-year flash-forward revealed that Damon — who apparently decides to hibernate in Brooklyn until Elena wakes up — and Stefan are being hunted by a mysterious crossbow-wielding lunatic. Must be Thursday!

Below, Plec explains the premiere’s biggest twists (WTF, Enzo?!) and teases what the rest of Season 7 holds:

TVLINE | Is the plan to catch up to the three-year jump by the end of the season?
Yes, that’s the plan — probably about three-quarters of the way through the season, actually.

TVLINE | So you must have everything pretty well mapped out.
Oh, yes. The thing about flash-forwards is that you do your best to map everything out at the beginning, because if you screw up, you’re stuck with it forever. We laid out the broad strokes of what we wanted to do and what little surprises we wanted to drop along the way. But we’ve also made some new discoveries in doing that; characters who perhaps weren’t going to live to see three years from now are now alive in their own flash-forwards. [Laughs] It’s good for our actors to know they might survive the time jump.

TVLINE | Let’s talk about that woman coming after Damon and Stefan with the crossbow. Is she someone we know? Someone we’re going to meet?
That’s Stephen Amell in drag. [Laughs] I can’t say, but a lot of people have told me their theories and there have been a couple doozies. I think it’s more fun to keep people guessing. 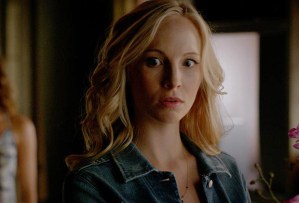 TVLINE | I loved hearing Caroline tell Stefan that he makes her happy. How close are we to getting a label on that relationship?
This year’s going to be a very peculiar year for their relationship. They’re definitely committed to trying to make it work, and if any two people can achieve what they set out to do, I think it’s them. But there are going to be a lot of curveballs thrown their way over the first part of the season that they’re going to have to wrap their heads around and circumvent in order to remain committed and happy.

TVLINE | So it’s mostly external forces getting in the way for them?
Yeah, some pretty bananas external forces, truth be told. Next week, we get the first glimpse of one of them.

TVLINE | Speaking of Caroline, Enzo kidnapping her seems to imply he’s made his choice. Is he officially a bad guy?
I don’t know if he’s officially a bad guy; he’s someone who’s always been on the fringe, looking for a tribe. He’s chosen Lily and her tribe because she’s the one person who’s been consistently warm and caring towards him. As the person who sired him, he feels this loyalty to her that he’s having a hard time shaking.

TVLINE | So we might see him playing both sides for a bit?
He’s definitely made his allegiance clear, but ultimately, he’s going to have to ask himself, “Is my allegiance to this crazy group of people, or is it to Lily? And if it is to Lily, why?” He’ll be faced with some interesting questions about why he cares so much.

TVLINE | The Heretics are clearly pissed about Malcolm. Who should we be most concerned about in terms of them seeking revenge?
I think you need to be a little bit worried about everyone. The question is: Now that Damon has acted out, what will Lily do to punish him? Will she punish him directly? As we’ve seen, Enzo made a move on her behalf to punish Caroline, so I think everybody’s going to have to watch their back as we head into next week.

TVLINE | Elena’s presence was definitely felt in the premiere. As the season goes on, will that let up, or will she always be there in spirit?
She’s always going to be present, emotionally and spiritually, but we won’t spend every episode going down that path about how much Damon misses her, or how different the world is without her. But she will be very much a part of the narrative, the existence of her, specifically as it relates to Damon’s journey and what he has to do to survive the next 22,000 days.

TVLINE | That scene with Alaric at the morgue was chilling. Is he headed to a dark place?
It’s headed to a place that’s equal parts dark and weird and sad and beautiful and hopeful and tragic. [Laughs] Really, any good Vampire Diaries adjective you can throw into the mix applies here.

TVLINE | Lastly, when Candice King first announced her pregnancy, a lot of fans jumped to the conclusion of a Stefan/Caroline baby. Was that ever a thought for you?
We had so many thoughts that were kind of hilarious, the first being: How are we going to create good story if Caroline never comes out from behind her enormous handbag? Or, can we get her an Olivia Pope coat? But I think the decision that we made about how to address and/or not address the pregnancy is very interesting. The fans will be intrigued to see how we either disguise it or embrace it, and that’s really all I can say.

Your thoughts on the TVD premiere? Grade the episode below, then drop a comment.