With only 10 episodes remaining to unite all of its central characters and save the world, Heroes Reborn this Thursday slowly began to fit its many puzzle pieces together — and, for one Evo in particular, that was a matter of life and death.

Before you give us your thoughts on the latest installment, let’s break down the NBC drama’s fourth episode:

CARBONDALE, ILL. | The hour begins just moments after last week’s ended, meaning Tommy and his mom have just been T-boned on their way home. Tommy — who is clearly in much better shape than his mom is — teleports her to the nearest hospital and, upon getting there himself, learns his mother has suffered an internal hemorrhage and requires a blood transfusion. Tommy takes the risk of his getting own blood tested (meaning the federal government is about to become aware of his Evo status), but it’s all for naught, as his blood type isn’t a match.

Here’s where Tommy’s powers really come in handy: After confiding to one of the nurses that he’s an Evo, Tommy is allowed to teleport himself to Indiana — the nearest source of some viable O-negative blood — and immediately bring it back to the hospital for his mom. The plan seemingly goes off without a hitch… until the aforementioned government officials track Tommy down at the hospital and threaten to let his mom die if he even thinks of teleporting out of their grasp. (And if Tommy’s day weren’t bad enough, he gets thisclose to kissing Emily in a storage closet, but she opts not to cheat on her boyfriend and backs away before Tommy can seal the deal.)

ST. LOUIS, MO. | Meanwhile, in the Midwest, Luke and Joanne are continuing their Evo killing spree, but Joanne’s really doing all the work at this point. Luke is too busy trying to keep his fire-wielding powers from his wife, lest she put a bullet in him upon learning he’s an Evo. (Sidebar: Was it not this week’s most heartbreaking TV moment when that dog laid down beside his recently-killed Evo owner? If this recap were a series of text messages, the iPhone’s “waterfall tears” emoji would be more than applicable here.) 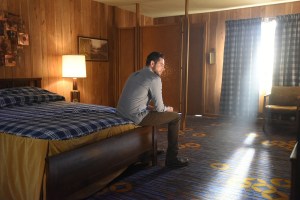 In order to keep a lid on his abilities, Luke holes himself up in a Missouri motel room with the curtains drawn, forcing Joanne to believe he’s merely got a fever. Once his wife leaves to track down the next Evo on the list, Luke decides to test out his powers and discovers 1) that even the slightest exposure to sunlight will set his skin aglow, and 2) he can legitimately make a glass of water boil just by holding it. (This seems like the right time for Luke to pursue a culinary career. Imagine how easy grilling would be!)

It isn’t until the next day, when he and Joanne are back on the open road, that Luke finally decides to come clean about what he can do. After telling Joanne that he feels they’ve lost each other in the year since their son died, Luke sets the car’s center console on fire, and Joanne immediately puts a gun to her husband’s head when she realizes what he’s showing her. She decides not to pull the trigger, but it seems to be the end of their marriage anyway when she states, “I really did love you” and continues the journey on foot — and alone.

ARCTIC CIRCLE | At long last, Thursday’s episode also offered some answers about the Evo named Malina and what exactly her role is in this endeavor to eventually save the world. Not only are we formally introduced to her Mr. Miyagi-esque traveling companion, Farah Nazan (who can make herself invisible on a whim), but we learn that Malina’s real power is to create life where there is none. For example, she literally breathes life back into thousands of frozen butterflies, and she can conjure full-grown trees with little more than a flick of her wrist. (Anything you can do about this California drought, Malina? That’d be swell.)

We aren’t told much else about Malina and Farah’s endgame, but when the skies once again fill with those same colorful clouds from the last three episodes, Farah ensures Malina that she “will have help” on her journey, even if “the others don’t realize it.”

LOS ANGELES | Not much comes out of the California-based subplot this week, but here are the highlights: Carlos fashions an updated version of the El Vengador suit (now featuring Kevlar!) that can literally knock the stuffing out of a punching bag; Jose realizes that his dad was the original El Vengador when he was alive and, in turn, reveals to Father Mauricio that he can pass through solid objects; and James Dearing (FKA Hot Paul, if only to me) tracks down The Reverend and Jose, where they’re both captured by one of James’ associates. 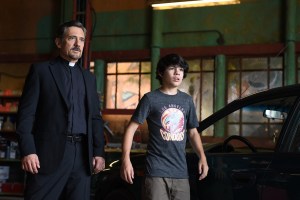 TOKYO | After successfully evading the bad guys at Yamagato Tower, Ren and Miko hop a last-minute flight to America, where they plan to visit Renautas’ hub in Midian. While en route to the States, Ren posts a video message to his Evernow-obsessed followers on social media, telling them to dress up like their favorite characters and head to Midian, where they’ll meet the real Katana Girl in person and help her on her journey. (And dress up they do, as if videogamers needed any more stereotypes perpetuated.)

MIDIAN, COLO. | Speaking of Midian, that’s where the climax of the episode takes place, after Erica Kravid’s daughter, Taylor, is persuaded by Noah and Quentin to help them break into Renautas’ headquarters. Once inside the company’s offices — and after Noah successfully turns Harris Prime and two of his clones into literal dust — they make their way to an ominous-looking lab, where all the Evos that have thus far been bagged-and-tagged are unconscious and hooked up to wires.

In that very room, Noah locates Molly, and although she first looks happy to see the man, Molly quickly turns Noah’s own gun on him, telling him he never should have tracked her down. She tearfully babbles a few sentences about Claire’s alleged death and “the location” that she’s not supposed to reveal… and just as she seems ready to off HRG himself, Molly points the gun to her own head and, before pulling the trigger, admits she’d rather die than help Erica Kravid kill seven billion people.

Following Molly’s suicide, Harris rushes to Erica and delivers the bad news. The CEO’s response? “Find that child and kill it.” It’s unclear what task Harris has exactly been given, but when he promises Erica he’ll do his best, Erica tells him that The Shadow will accompany him this time. In the final moments, we learn that The Shadow — a cloaked figure who is conjuring a sphere of wispy black smoke — is Quentin’s long-missing sister, Phoebe Frady.

OK, your turn. What did you think of Heroes Reborn‘s latest outing? And are you getting antsy to see Mohinder, now that we’ve heard his narration for the last three weeks?