“I believe that the Season 6 premiere gives Walking Dead fans everything,” he declares to TVLine. “It starts off with some of the highest intensity that we’ve ever seen on the show, and then gets contemplative very quickly. And then boom, it’s right back to that insanity and intensity. And it sort of follows that trail throughout the episode.”

Gimple likens the opener to a mash-up of the Season 4 and 5 premieres. “I thought it would be a cool idea to do 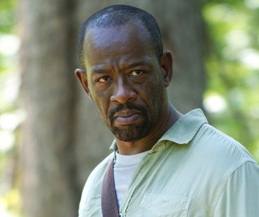 both of those episodes at the same time,” he shares. “[The Season 4 premiere] set up that whole season. It showed all of these interpersonal relationships, and it culminated in a huge set piece. And then [the Season 5 premiere] was just insanity from start to finish.”

Speaking of big Season 6 episodes, Gimple confirms that an upcoming hour will flash back to show viewers how Morgan transformed from the “disturbed, homicidal, traumatized” individual he was in Season 3’s “Clear” to the person in the Season 5 finale “who said that he believes all life is precious.” Acknowledges the EP: “Something happened in the middle of all of that. And we really do need to show [it to] you.”