Dismiss Empire‘s petulant Latina diva as “Guadalupe” at your own risk. Write off young, never-smiled-at-nothing rapper Freda Gathers as “some random hood rat” if you dare. Chuckle as budding egomaniac Hakeem Lyon boasts that his barely formed girl-group is ready for a satellite radio appearance — all while his moms Cookie gives him her sternest “I’ma beat you with a broom” facial expression.

Like professional sports, MTV reality programming and that inexplicable store in your local mall that goes by the name of “deb,” the music business is for the young. Sure, self-proclaimed gods like Lucious Lyon may run it, but at a certain point, even they have to sit on the sidelines, soaking up shine like Real Housewives craning for position during an Andy Cohen-hosted reunion special. 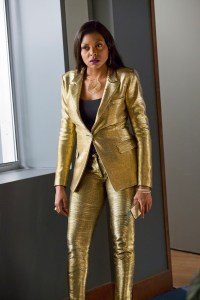 Granted, none of these young tricks would have the foggiest idea of how to exit a dinner soirée with all of the glamorous nasty conjured up by Cookie during her ex-hubby’s conciliatory “let’s reunite the family” feast. And no, they don’t have the kind of bankroll to pull off Lucious’ “I just bought the radio station — and your artist” end-of-episode twist. But I appreciate Empire‘s writers not shying away from the fact that — for better or worse — access to Auto-Tune and the ability to drop one’s assets to the floor is what keeps Justin Bieber and Selena Gomez atop the Billboard Hot 100, while Christina Aguilera is relegated to a red chair and wondering why her last record didn’t even go Gold, let alone Platinum. (If you don’t share our outrage, please watch the “Your Body” video — then hurl something breakable against a wall.)

Forgive me, though, because I am really not trying to compose a letter to Lee Daniels, Danny Strong and Ilene Chaiken begging them to cast Xtina in a recurring Season 3 role — not that there’d be anything wrong with it. Instead, let me get to the business of recapping “Fires of Heaven”:

REMEMBER THIS MOMENT IF THANKSGIVING GOES POORLY, K? | Lucious invites Cookie, Jamal, Andre, Rhonda and Hakeem for dinner — and offers to forget his kids’ corporate takeover and all their betrayals if they’ll give up the Lyon Dynasty scheme and rejoin him in the Empire fold. He then gives an ill-advised speech about choking down pride — “It’s chewy, and it’s hard to swallow.” — forgetting that humble is a color Cookie purged from her wardrobe back in the early ’90s. She rises up, grabs the table runner, and walks with all the ferocity of Linda Evangelista at a Karl Lagerfeld show — the banquet tumbling to the floor in her wake. Did you get the message, Lucious? I’m sure you will during the 20 million rewinds that Empire fans will make happen before Thursday morning rolls around. 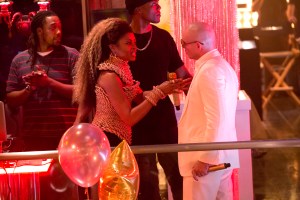 PITBULL-ONEY | Lucious plans a high-profile “welcome home from jail!” concert for himself — ugh, he is just THE WORST — but when he tries to recruit Anika in his efforts to squash Lyon Dynasty, she double-crosses him (hurrah!) and goes to Cookie (double hurrah!). Mama Lyon reads her for filth (“Let me guess, those five job offers never happened? Are your knees sore? Did you run out of lubricant?”) before joining forces with her arch rival, whose exasperated compliment (“I get it, I get it: You are the baddest bitch ever. You are badder than all the animals whose prints populate your wardrobe”) may be one of Empire‘s greatest one-liners ever. Team Lyon Dynasty crashes the party — unplugging the track on Jamal and Pitbull’s catchy duet, leading into Hakeem’s daddy-dis track that is blazing hot in both its paternal rebuke and its rapid-fire delivery. (Even Jamal has to give his brother a proud-yet-irritated wink.) It’s a direct hit to Lucious’ pride, but it won’t be the last punch thrown during the hour. 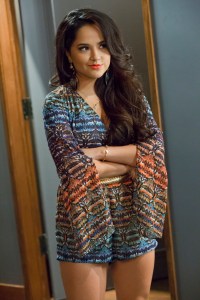 MENAGE A NAH | Ours is not to question who is funding Cookie and Hakeem’s startup Lyon Dynasty label, Lyon Dynasty, but rather to enjoy the sight of Mama Lyon putting her son’s Latina girl group through their paces like they’re unsuspecting grunts and she’s a Marine bootcamp instructor. (“Everybody wants to be Beyoncé — but you don’t want to put in the work!”) Just as Hakeem gets ready to unveil Mirage a Trois on Sway’s radio show, however, Lucious swoops in with the news that he’s not only bought the station (burn!) but also signed lead singer/Hakeem’s latest conquest Valentina to a solo contract. Lucious acts like he’s won the war – “rest in peace, baby,” he coos to Cookie — but his ex (in the style of Alanis Morissette) is here, to remind him: “You keep forgetting Lucious — you can’t keep Cookie down.”

AND BABY MAKES… NO IMPACT WHATSOEVER | Andre starts the episode begging for his dad’s forgiveness — and even gives him the idea to acquire Apex radio that results in Lucious’ final power play this week. But Lucious is colder than Kris Jenner after learning one of her kids isn’t down with a staged paparazzi encounter, telling Andre he’s no better or worse than 50 other MBAs who’d like the Empire CFO gig. “Maybe you should pray on it,” Papa Lyon sneers, after Andre looks confounded by his request to bring him something “that no one else can.”

Later, when Cookie realizes Andre will never be happy at Lyon Dynasty — that his heart belongs to Empire — she encourages him to use Rhonda’s pregnancy to get back in Lucious’ good graces. “Sometimes you’ve gotta pull at those heartstrings to get paid. Ain’t nothing wrong with that.” But when he follows through, once again, Lucious rejects the son who wants his love the most. “You are breaking my heart — the fact that you’re using this right now to get what you want from me,” Lucious says, before brushing off Andre like a potato chip crumb on a navy-blue polo shirt (#WriteWhatYouKnow). And then, like last week, Lucious flashes back to his own manic-depressive mother — flying high from a shopping spree for toys that will mean she and young Lucious can’t eat. Suddenly, we see the reason for the way he keeps Andre at arm’s length — but given all Lucious has been through, you’d think he’d be just a teensy bit better at navigating his own psychological kryptonite. 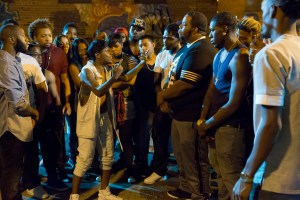 FREDA’S GOT TALENT | Remember the ill-fated Frank Gathers’ teen daughter (the one to whom Lucious promised to “slip a bone”)? Well, the fearless (and now free) head of Empire tracks her down at a rap battle where she pulls a gun rather than dropping the mic. Lucious drags her away from doing something stupid — “Baby, don’t do something that you can’t come back from!” — but his repeated refrain that the girl means everything to him musically leaves Jamal feeling jealous. Just as Becky convinces her boss/buddy to seek out Cookie to produce his record, though, Lucious pulls up in a limo, and drops this kernel of crazy: “You need a god to produce you.” Apparently, that god is Lucious. Pass intercepted. Jamal is back in Lucious’ clutches, and the Horrible Jamal-Cookie Feud of 2015 continues!

What did you think of this week’s Empire? Is Lucious too hard on Andre? Will Cookie and Hakeem succeed at Lyon Empire? Sound off in the comments!