ABC’s Castle this Monday introduced us to “Lucy,” the know-it-all that helped Rick adjust to life without Kate… and also blatantly ribbed him about it. “Sucks to be you, Rick” and all. 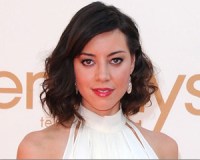 behind “Lucy” — an Alexa-like home operating system gizmo — has been revealed, and it belongs to Parks and Recreation fave/Friend of Fillion Aubrey Plaza.

Plaza revealed her stealthy voice casting on Twitter, in a message directed at Fillion. (Among other things, the actors’ association includes working together on Pixar’s Monsters University.)

@NathanFillion remember when I was the voice of your smart house and we fell in love?!?!?!?! #deletedscenes #castle

If you wish to rewatch the “Lustle” scene now with an ear for Plaza’s voice, I’ve cued it up here. Did anyone by chance guess it was Plaza beforehand?