Will Arrow target two big secrets? Who has been “replaced” on Castle? Should S.H.I.E.L.D.‘s FitzSimmons fans fear the very worst? Read on for answers to those questions plus teases from other shows.

What is Arrow‘s Diggle willing to do to find the truth about Andy’s death? Will flashbacks with Andy parallel his current life (as Oliver’s tend to)? –Ann
First of all, the possibility of there being Diggle/Andy flashbacks this season is currently at “maybe,” executive producer Marc Guggenheim says, and there’s a reason for that. “In Season 1, we broke format and did a flashback from Moira’s perspective, in Episode 21. That worked out so well, we did more non-island flashbacks in Season 2,” he explains. “And that worked out so well, we thought, ‘Let’s do more in Season 3’ — but for my money, we ended up doing too many. Every time you did a non-island or non-Hong Kong Flashback, you stop that story so it prevents that story from gaining momentum.” As such, the first flashback to break away from format this season won’t happen until Episode 8.

Any scoop about Felicity’s father on Arrow? –Sara
Like, whether we’ll learn any information about the elusive figure now that Donna Smoak’s visit has been extended? “We’re hoping,” executive producer Wendy Mericle responds. Adds EP Marc Guggenheim: “We’re always talking about it, but we have to find the right story and the right moment. We trust that it will come to us when it’s meant to come to us.” Maybe it’s a good thing the daddy issues haven’t come up yet, because funny Felicity is back “with a vengeance” in Season 4, Guggenheim reports. “[Emily Bett Rickards is] on the top of her game. She’s hysterical. We’re definitely writing jokes for her, but she’s also finding humor in lines that weren’t intentionally humorous.” P.S. I’ll be moderating the Legends of Tomorrow panel at New York Comic-Con on Sunday, email me any burning Qs!

We know that Castle‘s Vikram Singh is a tech guy, and he’ll be working with the 12th Precinct. I was wondering if we’re going to see Tory (played by Maya Stojan) again. Is she still at the 12th? –Michelle
“Unfortunately, we might not be seeing Tory” any time soon, co-showrunner Terence Paul Winter reports. As Alexi Hawley explains, “Adding Vikram (as the 12th’s new digital investigator) takes that slot a bit, and because he serves a bigger storyline” — helping Beckett hunt down LOCKSAT — “it’s more productive for us to use him.” But speaking of recurring characters, I do have good news for Inside Line e-mailer Sarah: You’ll “definitely” be seeing Dr. Perlmutter again.

On Castle, who played the female from the AG’s office that shot herself? –Pepe
I thought she looked familiar, and indeed that was Jacqueline Obradors (from NYPD Blue, Freddie, NCIS) playing shady Allison Hyde.

I was wondering if you 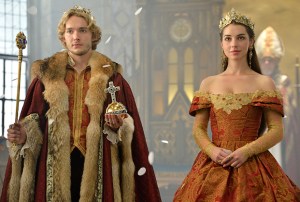 know anything about Reign‘s Francis? Toby [Regbo] is nowhere to be found, and we are worried he might be done already. Can you easy our worry, please? Also, anything about Frary! –Charlie
Cheer up, Charlie — there’s plenty of Francis to be seen in Friday’s Season 3 premiere, and now that he’s been formally reunited with Mary, you can in turn expect lots of fun Frary action. Of course, there’s also that small matter of his impending death, which gets uncomfortably addressed in the first episode back. (Have those tissues ready.)

Is there still hope for Greer and Leith in Season 3 of Reign, or is their romance over for good? –Ilenia
If there is still hope for that pairing, it certainly isn’t visible in Friday’s premiere, which introduces a potential new suitor for the still-married Greer — and this one is accustomed to getting exactly what he wants. (Bonus scoop: Leith/Greer isn’t the only fan-fave relationship you should be worried about as we head into Season 3.)

I’m dying for a scoop on the Bones and Sleepy Hollow crossover event. –Cordell
In addition to all that we have reported thus far, the official Fox synopsis for the Oct. 29 event says that in the Bones hour, titled “The Resurrection in the Remains,” Brennan, Booth, Abbie and Ichabod must figure out how to work together to discover the identity of a 200-year-old headless corpse and how it is linked to a contemporary murder victim. Then in the Sleepy Hollow half, “Dead Men Tell No Tales,” Pandora unleashes a force to awaken the dangerous Red Coat General Howe, forcing the two teams of crimesolvers to find a way to save the titular town from the British Army of the Undead. “Can the power of Booth and Brennan combined with Abbie and Crane be enough to stop Pandora’s evil forces?” (Who thought they’d ever read such a Fox teaser!)

Could you please tell me who sings the song for the Haven Season 5 commercial? –Dayla
That is “The Last Boat’s Leaving,” by Bachelorette. And if I may attempt a clumsy segue, I’d like to point out that Syfy’s Haven won’t be “leaving” viewers hanging when it wraps its five-season run (starting this Friday), seeing as the final episodes were very much crafted as an ending to the series. 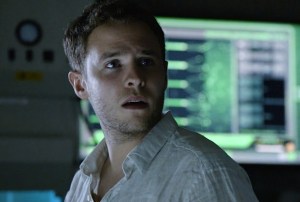 of Agents of S.H.I.E.L.D. Do you have any scoop on what or who is chasing Simmons on that other planet? –Michela
You will get some answers about Jemma’s otherworldly predicament this Tuesday, though I must warn you: The episode’s cold open, which is set a long time ago, will leave you fearing the very worst for Fitz’s “lost” love. Also in the surprisingly eventful Week 2: Ward kicks a whole lotta ass and you will learn what skill May excelled at when she was a young girl. Any guesses?

The Quantico twist that has me most curious so far is the twins (played by Yasmine Al Massri). Any scoop on what that is all about? –Meaghan
Nimah and Raina aka the twins-posing-as-one “were one of the very first things I thought about [when creating Quantico],” showrunner Josh Safran told me. And though the double take may seem far-fetched, Safran says, “It’s based on a KGB tactic that was used during the Cold War as a way to…. Um, I actually don’t want to say any more, because I was about to give it away! But you will discover why they were recruited, and it is very integral to the plot.”

Any chance Danny’s girlfriend will make a reappearance this season on Hawaii Five-0? –Sarah
Ha, be careful what you wish for, Sarah! Because as showrunner Peter M. Lenkov told me (with a hearty chuckle), “We’re going to do a Valentine’s Day episode, where everybody’s love life goes to the s—ter on that day!”

Will we be seeing Lily back on Once Upon a Time this season? –Aidy
Like Eion Bailey’s August, who also was in the mix as Season 4 came to a close, Lily (played by Agnes Bruckner) is theoretically “hanging out there somewhere [in Storybrooke],” series co-creator Adam Horowitz tells me. “We have a plan to pick up her story, though it’s not going to be right away. It may be the second half [of Season 5].”

Will Once Upon a Time‘s 100th episode be the conclusion of the [Dark Swan] arc, or will it be more of a retrospective clip episode? –Linda
The ABC series’ milestone hour in fact will kick off Season 5B, in the spring. P.S. I’ll be moderating the Once panel at New York Comic-Con this Friday, wave if you see me!

Real questions, real answers. If you need the Inside Line on a favorite show, email InsideLine@tvline.com!  (With reporting by Vlada Gelman and Andy Swift)