The good news about The Affair‘s Season 2 premiere: Unlike December’s season ender, no one was held at gunpoint.

The bad news: Not a single person seemed remotely happy throughout the hour.

OK, maybe that’s an exaggeration. Noah certainly cracked a smile or two during the episode. Helen’s new boyfriend seemed mighty pleased throughout (with himself, mostly). Even Helen and Noah’s divorce mediator (from one POV) seemed positively jovial about the couple’s decision to end their marriage.

But aside from those fleeting moments of optimism, the Showtime drama’s sophomore debut featured a number of characters who never seemed to get the good news for which they were hoping. Let’s recap:

NOAH | As most Affair episodes are wont to do, Sunday’s starts out with Noah’s perspective, presumably several weeks after the events of last season’s finale. Noah is now living in a guest house in Cold Spring, N.Y. — with Alison, though he won’t admit that to Helen — as he attempts to write another draft of his follow-up novel. (Even though we already know that the book will be wildly successful a few months down the road, the writing process is no picnic, evidenced by Noah’s editor hating the alternate ending he’s written.)

But Noah’s got plenty else to focus on, including moving all of his stuff out of the brownstone he shared with Helen. When he gets there, Helen’s mother insists that every item in the house must be appraised before he can take anything, right down to the pictures on the wall. Noah chooses to ignore the woman, grabbing a laundry basket full of books and cookware and other odds-and-ends that he’ll take with him to Cold Spring. While at the house, Noah has two unfortunate run-ins with his sons: First, Martin overhears Noah threatening to kill Helen’s mom if she doesn’t let him take his belongings. (Lovely!) Later, his younger son Trevor bursts into tears when he finds out that Noah has fallen in love with another woman, prompting Trevor to slap his dad across the face. (Even lovelier!)

Nothing gets easier when Noah heads to divorce mediation, where Helen insults him at every turn. She flat-out laughs at the idea that Noah’s next book will turn a profit, and when he suggests moving into a Manhattan apartment so he can eventually be closer to the kids, Helen fires back, “Where in the city are you looking? Coney Island?” As the wise philosopher Taylor Swift once said, why ya gotta be so mean, Helen? 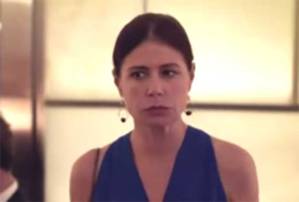 Fortunately, there’s a bright spot for Noah, when he returns to Cold Spring at the end of the day and finds Alison making dinner. They eat on the porch — that house on the water is to die for, no? — and dance for a while as the sun sets, and it’s all very peaceful and serene… until the episode jumps a few months ahead, where Noah is now in a holding cell following his arrest for Scotty Lockhart’s murder. Detective Jeffries enters, advising Noah to take a plea deal at his upcoming arraignment, and just like that, we jump to…

HELEN | …an entirely new perspective. As showrunner Sarah Treem has explained in recent months, The Affair‘s second season will also feature Helen and Cole’s viewpoints, beginning with Noah’s soon-to-be-ex-wife in this episode. Helen wakes up in a swanky hotel, where it seems she’s now dating Max, the wealthy-yet-unstable college friend of her and Noah’s. They engage in some early morning bow-chicka-wow-wow (though Max’s attempt at talking dirty couldn’t be less of a turn-on for Helen — and, uh, I’m not entirely sure the full-frontal shot of Max was necessary), before Helen admits she must attend a benefit that evening for her mom, but she’s dreading going alone. Hmm, if I didn’t know better, I’d say that’s an important plot point…

As it turns out, Helen’s perspective on the divorce mediation is a whole lot different from Noah’s. Whereas Noah perceived the mediator as a happy-go-lucky dude, Helen’s viewpoint paints the man as cold, standoffish and completely resentful of his job. In Helen’s version, she’s the one to suggest that Noah move back to New York City to be with the kids, and he’s the one who insists he can’t afford joint custody until his book is finished. (ICYMI, here’s what Treem previously had to say about those conflicting viewpoints.)

In comparison to Helen’s day, Noah’s seems absolutely peachy. First, she picks up her daughter from ballet class, where she overhears two moms talking very unkindly about Helen and Noah’s separation. Meanwhile, at home, Whitney is furious because Helen’s mom won’t let her write a college essay about the near-death experience she had a few months back (i.e. Cole pointing a gun at her head). And to make matters worse, Helen’s mom can’t understand why she and Noah are even going through with the mediation drama, especially since Noah doesn’t deserve it.

All things considered, it’s no wonder that Helen tries to put off going to the fancy-schmancy benefit, choosing instead to smoke  marijuana (I have since learned!) outside the venue and delay the event as much as she can. When she does decide to go in, she finds that Max is also attending — I knew it was an important plot point! — and he spends the evening detailing the enormous crush he had on Helen in college. It’s sweet, if you think those stalker vibes are romantic.

Helen’s mediocre evening ends at home, where she notices that Noah has taken a painting off their bedroom wall — and just then, we are once again brought into the future, where Noah’s new lawyer, Jon Gottlief, visits the man in his holding cell… accompanied by Helen. Jon insists that Detective Jeffries doesn’t have Noah’s best interests at heart, but when Noah confesses he can’t afford such a high-profile attorney, Helen reveals that she’s paying. Altruism for the win!

OK, your turn. What did you think of The Affair‘s Season 2 premiere? Grade the episode via our poll below, then hit the comments to back up your choice!