Homeland returned Sunday with its biggest twist yet: During the nearly-three year time jump that preceded the Season 5 premiere, Carrie Mathison transitioned into a… happy human being.

When we first see her, Claire Danes’ tortured terrorist hunter is enjoying a virtually drama-free life in Germany, one that includes a new (smart and stable!) boyfriend, a daughter she no longer wants to drown in a bathtub, and a civilian job that is both fulfilling and, most importantly, safe.

But as the premiere reached the midway point, dark clouds started closing in on her idyllic fresh start. Specifically, an escalating international crisis found Carrie caught between her new employer and her old friends at the CIA. (Speaking of the latter, Carrie and Saul are barely on speaking terms after she essentially derailed his CIA directorship.)

TVLINE | You had a lot of groundwork to cover in this episode. You were planting as lot of seeds.
We’re doing a couple of things [in the premiere]. First of all, you’re locating your character emotionally in a new place. And I don’t mean geographically. I mean what’s going on in their heads. And you’re also explaining to the audience what happened in the intervening years. And then third, you are introducing a new cast of characters. And, lastly, you set the stage for the narrative. What is going to be the story this season? The first episode is among the most difficult to do every season, because you want to be compelling and exciting; Homeland is a thriller at its core. But you do have all of these other missions to accomplish at the same time. And the trick is to find the balance.

TVLINE | Carrie seems so personally content in this episode. Is it fair to say this is the happiest we’ve ever seen her?
I think that’s fair to say. She’s made some big choices in her life and they worked out. She’s content in her job. She’s stable and content in her home life. She has her daughter with her. And, sadly, all of that stuff is not going to last very long.

TVLINE | You’d think she’d learn not to get involved with a colleague.
That’s probably true, but it’s more that here she is in a foreign country and she’s working in this intensely passionate environment and all of these people are committed and passionate people. And she meets a handsome guy [Alexander Fehling] and they hit it off. I don’t think she is making a mistake on that front. I think she has chosen wisely. This guy is a really good guy. 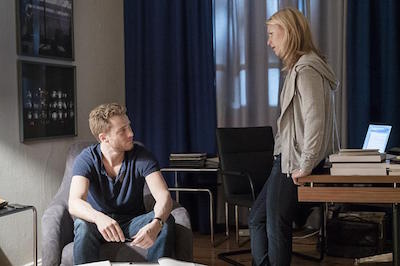 TVLINE | Why did Carrie impede Saul’s appointment for CIA director?
In the vetting process, the committee asked Carrie to testify on behalf of Saul. She was asked what happened to Saul while he was a prisoner. And Carrie was concerned that Saul, something snapped. That Saul might not be the best person to lead the agency at this time. She didn’t tank his bid necessarily, but she didn’t help him along the way.

TVLINE | He told her he’s not mad at her — was he lying?
Two years have gone by. I think he’s put that behind him. Saul has a very senior job at the agency. He’s the European division chief. He’s got plenty of responsibility. And he’s continuing to do the work that he’s always done, and in the process becoming much more of a company man then when we first introduced him.

TVLINE | I didn’t think Quinn could get any darker. Why take this brooding character and make him even more tortured?
Quinn was doing everything he could to get out, to escape the gravitational pull of that rabbit hole. And he failed. He and Carrie missed each other. The timing was wrong. And since then Quinn has been down in Syria and Iraq leading the special ops team for the past two years, fighting these militias, and you can only imagine the s–t he has seen down there. And that can’t help but affect somebody. And it certainly affected him.

TVLINE | Carrie has a new adversary in colleague Laura (Sarah Sokolovic). I may be reading too much into this, but does Laura have a thing for Carrie’s new man? Is that partly what’s fueling all the hate?
I think you’re reading too much into it. What’s interesting about Laura’s view of Carrie is as he doesn’t trust Carrie. Carrie was an intelligence office that worked for the CIA. And all of a sudden now she’s the head of security of the Düring Foundation. She suspects Carrie of being eyes and ears for the CIA at the Foundation. And, of course, the CIA thinks Carrie is a traitor to her former job. So Carrie’s caught in no-man’s land. And Laura represents that space Carrie is living in now.