The Briggs family tree is sprouting another branch on Sunday’s Blood & Oil (ABC, 9/8c), but does new arrival Lacey have what it takes to keep Hap and Wick from killing each other?

Hap’s daughter Lacey, described by actress Miranda Rae Mayo as “an educated, feisty, no-nonsense young woman,” was born from one of the oil tycoon’s previous relationships. Upon her return to North Dakota, Lacey is horrified to see her father and brother at each others’ throats.

“It’ll be interesting to see how she deals with [their feud], because she loves them both so much,” Mayo explains. “It’s inevitable that she’ll end up playing the peacemaker — or at least try.”

Lacey’s devotion towards her father and brother is matched only by her indifference towards the newest member of the Briggs family: Hap’s (much) younger wife Carla.

“They definitely butt heads,” Mayo says with a laugh. “I don’t know any daughter, on TV or in real life, who wouldn’t have a problem with her father being with someone as young as Carla — that’s definitely a whole thing. Also, Carla seems to care more about big business than about her family, and that rubs Lacey the wrong way.” 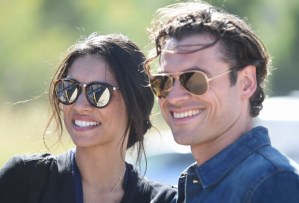 That said, Lacey isn’t always on her best behavior when it comes to her family. Mayo teases that “things get a little friendly” between Lacey and Hap’s driver AJ (played by series regular Adan Canto), who’s also introduced this week.

Will you be tuning into Blood & Oil‘s second outing? Drop a comment with your thoughts on the ABC drama below.