If you were watching The Blacklist for the first time during Thursday’s Season 3 premiere, you might have expected the episode’s opening moments to have a very different outcome.

You might have expected that Agents Ressler, Navabi and Mojtabai would be successful in their capture of Red and Liz, or that their wide perimeter of cop cars and police officers would prevent the fugitives from ever getting out of Washington, D.C.

But if you’ve been with the NBC series since Episode 1, you know that Red and Liz’s immediate capture was never even a possibility.

Indeed, Season 3 of the drama begins in D.C., where the FBI task force — or what’s left of it, at least — is doggedly pursuing Liz (and Red, but he’s more of a footnote), after she gunned down Tom Connolly and has gained quite the reputation as a spy and a terrorist. Unfortunately for Ressler, who’s now in charge of the Liz Keen manhunt, she and Red elude the FBI on multiple occasions throughout the hour.

Plan A: They don FBI uniforms and take shelter in an underground bunker, a few feet beneath a bar owned by one of Red’s longtime associates. But the associate’s sister, Tiffany, is not OK with an alleged terrorist breathing the same air as her, and she calls in an anonymous tip to the FBI that brings Ressler & Co. to the bar — and straight to the bunker where Red and Liz were staying. They escape through an air vent, but barely. 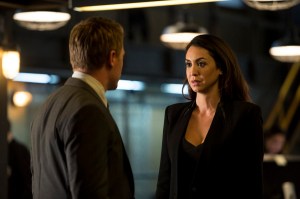 Plan B: They steal a rich guy’s car and hide out in his rich-guy apartment for a while (interrupted only by the Spanish-speaking housekeeper), giving Liz just the right amount of time she needs to dye her hair platinum blonde. Red seems particularly taken aback by Liz’s new locks, and the agent realizes that it’s because she resembles her mother for the first time — but more on that later. Now that their underground hideout has been compromised, Red and Liz are forced to move up their appointment with The Troll Farmer, a proverbial illusionist who uses social media and Photoshop to create diversions. As Red puts it, “He is much more than a rumormonger. The events he creates appear to be real and provoke a very real response — smoke manufactured to turn the cameras away from the real fire.”

In short, The Troll Farmer is able to create a diversion for Red and Liz — fake photos and tweets that indicate the fugitives are roaming the streets of D.C., which they definitely aren’t doing — which should allow them to safely get out of the city. But Ressler is too smart for the hoax. Almost immediately, he figures out that Red and Liz are trying to create a distraction, and he and the FBI create a barrier of cop cars at the precise exit point that Red and Liz are hoping to use. Oops.

I’ll spare you the minutiae of Red and Liz’s attempted escape and merely give you the result: Red is able to get out, but Liz isn’t. In a last-minute phone call with Liz, Red assures her that if she’s anything like her mother (aside from the blonde ‘do), she is clever and resourceful enough to figure this thing out. And figure it out she does: At the end of the hour, Ressler and Navabi find Liz walking down the street, which immediately turns into an intense foot chase down a D.C. sidewalk. But before the agents can capture her, Liz climbs over the gate of The Embassy of the Russian Federation and proclaims: “Help! My name is Masha Rostova. I’m a Russian agent. I work for the FSB, and I’m seeking diplomatic immunity.”

OK, so it’s no, “My name is Inigo Montoya, you killed my father, prepare to die,” but it’ll have to do.

Other highlights of the eventful finale: 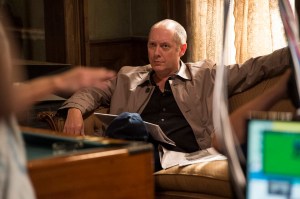 * We’re introduced to a new villain named Mr. Solomon (played by Edi Gathegi, Proof), who works on behalf of The Cabal and boy, is he nasty. Not only does he inform The Director that the rest of The Cabal has lost faith in his abilities (“Every breath you draw is at our discretion,” Mr. Solomon says with a freakin’ smile), but he also briefly kidnaps Dembe’s granddaughter (!) and introduces a nerve agent that will kill her in three weeks… unless Dembe cooperates long enough to get the baby an antidote. That. Is. Cold.

* Each member of the FBI task force plays The Blame Game with one another, with each of them partially responsible for Liz’s escape. Cooper admits that he told Liz to run after shooting Tom Connolly, and Ressler confesses that he let Liz get away during a crucial 60-second stretch in which he could have captured her. The bright side of all this? Cooper is finally reunited with his wife, Charlene, and he delivers the excellent news that he doesn’t really have cancer. (Well, sort of excellent news, if you don’t count the fact that Cooper was expertly manipulated by shady government officials.)

* Moments after escaping D.C., Red gives Ressler a call and makes him an offer that he legitimately can’t refuse: the name of a blacklister in exchange for Ressler’s word that he will give Liz the benefit of the doubt if he captures her. Ressler agrees to the terms, and his sole victory of the day comes in the form of The Troll Farmer, who he wastes no time in arresting.

Your turn! What did you think of The Blacklist‘s Season 3 premiere? Grade the episode via our poll below, then hit the comments to back up your choice!