Thursday’s episode of Heroes Reborn can best be summed up by Ghost‘s Oda Mae Brown: “Molly, you in danger, girl.”

Even though the hour was certainly harrowing for Miko, Tommy and the rest of the Evos, none of them were kidnapped, tranquilized on a flight to Colorado or had wires inserted into their skull so that a corrupt corporation could use their powers for evil. So, yeah, Molly Walker wins this round.

But before I get ahead of myself, let’s break down the details of “Under the Mask”:

DANCIN’ WITH MOLLY | Now that their car and most of their resources have been stolen by Luke and Joanne, Noah and Quentin are forced to go on the run from Renautas as they track down Molly. First thing’s first, though: Quentin needs to see a doctor after taking a bullet to the arm, and when Noah accompanies him to the hospital, he is immediately recognized by one of the staff members, Dr. Moore, who last saw Noah on the day of the Odessa explosion. Apparently their last meeting didn’t go too well, either, because the sight of Noah has Dr. Moore calling security within seconds. Sensing that he’s not in Dr. Moore’s good graces (but unable to remember why, thanks to The Haitian), Noah holds one of the hospital’s security guards at gunpoint and forces him to find the building’s camera footage from June 13 — a task that gets accomplished way too quickly, if you ask me.

The security tapes reveal quite a bit of information: Not only does the timestamp keep jumping back and forth (which must mean Hiro Nakamura was there at some point), but Noah is spotted in the morgue, weeping over Claire’s body. Present-day Noah is, understandably, only more puzzled after viewing the footage. Wasn’t Claire not in Odessa on the day of the attack? What does Hiro have to do with any of this? And what did The Haitian want Noah to forget when he wiped his memory? Once again, Noah concludes that the only person who can give him answers is Molly, so he and Quentin make their way to Midian, Colo. to track her down. 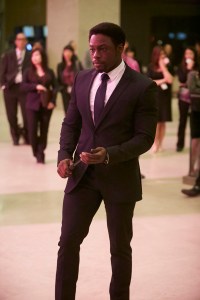 Molly, meanwhile, is having a rough go of it after getting captured by an Evo and his girlfriend in a Las Vegas hotel room. They corral Molly into a private Renautas jet headed for Midian (and tranquilize her once she’s on board, for good measure), and once they’ve landed, Molly is the last piece of the puzzle that Renautas needs to launch E.P.I.C., a new form of technology that will harness Molly’s powers and locate every single Evo on the planet with the press of a button. (That’s impressive and all, but I’m still not over the whole “moving pictures” thing that the iPhone 6S can do. The future!)

The good news: Noah and Quentin find their way to Midian, sneak into Renautas’ headquarters and get Molly alone for a brief chat. The bad news: Molly doesn’t want to go anywhere with Noah, and she refuses to tell him what really happened in Odessa because “there’s too much at risk.” Sooo… that was a bust. And to make matters worse, Molly is hauled off to a tiny, dark room by a few Renautas employees just moments before the company’s CEO, Erica Kravid, plans to present E.P.I.C. to a room full of Renautas higher-ups. Molly struggles as much as she can, but it isn’t enough. She’s hooked up to all sorts of wires, and when a plug is inserted directly into her head (!!!), E.P.I.C. is launched, giving Renautas access to every Evo in the world. Great.

* With the information of countless Evos literally at their fingertips, Luke and Joanne find themselves at a crossroads — she wants to keep their killing spree going, but he can’t understand why they’re still doing this after a full year has passed since Odessa. Luke gets so frustrated, in fact, that when he angrily turns down the car’s radio volume, the dial suddenly sparks, and their car breaks down seconds later. That afternoon, when the couple stops at a diner for lunch, Luke literally cooks his very rare steak into a well-done piece of meat, simply by touching his knife to it.

But this has to be a fluke, right? There’s no way an Evo killer could have powers himself, right? For Luke, no such luck: After he and Joanne stop at a motel for the day, Luke feels himself burning up — nay, glowing — in the afternoon sunlight, and before he can stop it from happening, columns of light begin bursting from Luke’s palms. (This will be a very uncomfortable discussion with the wife later.)

* In Tokyo, Miko is just a few concussed security guards away from finding and saving her father… but she is stopped by Harris Prime, a Renautas employee who takes Miko’s sword and informs her it isn’t hers. When Harris presents the sword to Erica Kravid, they both realize the weapon belongs to Hiro — I believe the word “Yatta!” is appropriate here — and Harris is instructed to hold Miko in the building’s main conference room.

Once there, Miko is overwhelmed with new information: Not only does her father have powers, but there was apparently an accident that killed Miko in the past. Harris offers to jog Miko’s memory with an ominous-looking set of knives, but before he can start torturing her, the adorable video gamer Ren bursts in and saves Miko. And herein lies the crazy part: When Miko severs Harris’ arm before escaping with Ren, the appendage immediately regenerates on Harris’ body — and a second body regenerates from the severed arm. Not only are there two Harrises now in the conference room, but there could be countless copies of him across the globe. Let’s just call it Heroes: Orphan Black and call it a day. 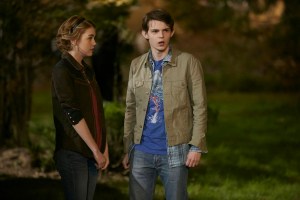 * Speaking of Orphan Black, Dylan Bruce — aka Orphan‘s Hot Paul — makes his first appearance in Episode 3 as an enemy of the Evo population in Los Angeles, who tries to bag and tag as many evolved humans as possible while getting intel on El Vengador’s underground railroad. Carlos, who has decided to officially take over his brother’s masked alter ego, tracks down Hot Paul — yes, I will call him that until Dylan’s character is given a name — and attempts to kill him… but apparently Hot Paul is an Evo himself, and Carlos is no match for his adversary’s super-strength.

* Just before he attends a house party thrown by Brad, Tommy informs his mom that he’s been getting anonymous text messages that are warning him of danger. His mom immediately deduces that it must be Casper Abraham — aka The Man With The Pennies — and when she pays Casper a visit at gunpoint, he informs her that he is merely “following the plan” and that “the world will need Tommy soon.” It’s all very cryptic and hard to decipher, but Tommy’s mom is panicked enough to pick him up from the party early. Although Tommy tries to calm her down and convince her that they don’t need to leave town this time, his mom is so frazzled while driving that she runs a yellow light… causing their car to be T-boned.

* And let’s not forget what’s happening in the Arctic Circle: An Evo named Malina is learning to harness her powers, which, at this point, seem to involve the control of colorful storm clouds that are threatening the planet. Just as Malina is beginning to understand her abilities, though, Harris and a few of his Renautas henchmen arrive in the Arctic Circle, where they begin to close in on Malina’s whereabouts. (Malina, you also in danger, girl.)

OK, your turn. What did you think of the latest Heroes Reborn episode? Which storyline have you found most intriguing? Hit the comments!