Like the wide white lapels of Cookie’s Chanel-plaid jumpsuit, it’s the “Are you kidding me?” details that make Empire so ridiculously delicious.

A hard-charging prosecutor shows up to court with a La Perla bra pushing her cleavage higher than a Patti LaBelle glory note. A guy named Thirsty (!) — with a law degree from the University of Guam (!!) — lands a job defending one of the richest and most powerful men in music. And not even Fox’s own highly paid American Idol judge Jennifer Lopez is safe from the vicious tongue of the Lyon family matriarch.

Sure, this week’s installment completely denies us a single sighting of Porsha, Becky and (as Lucious would put it) that… lesbian… bitch Mimi Whiteman. And yes, there’s more back-back-forth-and-forth of loyalties and motivations than Aaliyah’s debut single. (If you’re too young to get that reference, click here and thank me in the comments).

But when a good chunk of the action takes place in Ghetto-Ass Studios, when Cookie is once again wielding a broom in Hakeem’s presence, and when Lucious has you singing along to a jam called “Snitch Bitch” — and wondering if he’s somehow deduced who sold him out — it’s hard to complain too much. So let’s get to recapping the action in “Without a Country.” 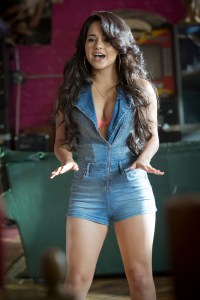 HUSTLE AND FLOWER | The hour opens with the recently fired Cookie, Andre and Hakeem kicking rocks — with their cardboard boxes of personal effects (including Mama Lyon’s orchid) — from Empire HQ, and then a montage of scenes in which the trio set a plan in motion to start their own label (though Anika’s possible participation draws Cookie’s vehement and unsolicited veto).

Cookie is most focused on getting new music from Hakeem and Tiana (who’s got a hot single, but apparently can no longer afford pants now that she’s left the major-label system); Andre seems to be struggling to keep things professional (in a less-than-professional setting); and Hakeem is suddenly obsessed with creating a multi-racial girl group he wants to call Rainbow Sensation. (At least Cookie and Anika can agree: That name is just bloody awful.)

Hakeem takes “taste the rainbow” to new and skeevy levels (sorry for going there) by bedding Valentina (guest star Becky G), an ambitious and charismatic chica who already considers herself a Beyoncé (post-Destiny’s Child, natch). “With or without you,” she huffs at her audition, “I shine.” (Oh, and she says it in Spanish first, then translates for her “bitch” benefactors.) “She crazy,” sighs Hakeem. “I love her.” #LOL

Ultimately, though, Hakeem is frustrated that his multi-ethnic idea is being stymied by the fact that he’s only found two candidates — and they’re both Latina. “Ain’t nothing wrong with a couple of J.Los — as long as they can sing,” interjects his mother. Anika, however, finally exits stage left when she tries to step with Cookie, and Mama Lyon delivers this TKO punch: “Let me tell you something, ho. If it weren’t for women like me, bitches like you would spend a lifetime on your knees — or underneath my 20-year-old son.” Ohhhh, she went there, all right. For a second, I thought Cookie’s vitriol toward Boo-Boo Kitty seemed a little overzealous, but the whole reminder about how she went from Cookie’s ex to her son kinda made the rage resonate, no? 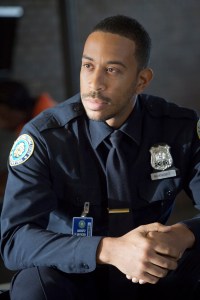 CELL-BLOCK TANGO | Meanwhile, back in prison, Lucious’ medication goes missing — and Officer M. Knight (Ludacris) implies that if Papa Lyon cooperates with the prosecutor, he’ll get ’em back faster. Who should pop up in the visiting room by Thirsty Rawlins, who’s apparently well-versed in Roxanne Ford’s dirty tricks — and that knowledge trumps his cheap suit and dubious degree. He’s hired — and he promptly gets Lucious his meds as well as bootlegged recording equipment with which he can cut the straight-outta-lockup jam “Snitch Bitch” (which, for the record, hits harder than The Good Wife‘s “Thicky Trick”).

While Knight breaks up the recording session and threatens that he could kill Lucious with “no consequences” — after all, he’d be “just another dead rapper” — Lucious looks almost amused as he’s tossed into solitary confinement. “You and that bitch Miss Ford make mistakes,” he smiles, as friendly as if he was ordering a soft-serve from an ice-cream truck. “I don’t.” 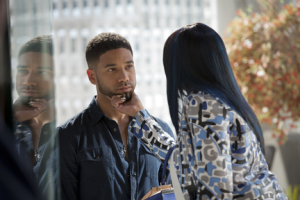 MEANWHILE, BACK AT THE EMPIRE | Jamal is trying to juggle running the label and maintaining his artistic relevance, though if I’m being honest, the awful distortion at the end of  “I Was Born to Love You” makes Cher’s “Believe” sound totally naturalistic. He’s also giving total non-answers to an Entertainment Tonight-type journalist — with Michael serving as a pretty bauble in the kitchen — a setup that’s interrupted by Cookie at her most “on.” All she wants is for Jamal to give Hakeem his music back. “Lucious is trying to make you like him — but you ain’t him,” she says, squeezing his jaw, then, as the elevator closes, tossing a grenade into the hall that she and Andre and Hakeem are starting their own label.

Jamal and Lucious finally decide Empire needs Hakeem — or at least his music — but despite some not-entirely-unsweet overtures from his big brother, Jamal rejects the offer and then leaks the demos of his Empire-owned CD to the internet. Jamal says he’ll “sue the drawers off [Hakeem’s] black ass,” but his threat has all the bite of a kitten digging into a bowl of Fancy Feast. Hakeem — young and beautifully cocky — struts out of Jamal’s house/life and promises to send VIP passes for Jamal and Lucious when he plays Madison Square Garden. 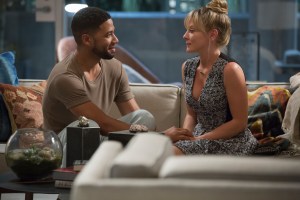 WHERE’S ANDRE? WHAT HAPPENED TO ANDRE? | As he often is, Andre seems the most isolated Lyon. He doesn’t seem to have any real joy as he sulks around Ghetto-Ass Studios, and eventually, Rhonda goes to secretly meet with Jamal and beg the kingpin to forgive his brother. She also lets slip that she’s pregnant — and I wonder if she’s playing a long con or just genuinely trying to help her husband in the moment. Time will tell.

Andre finally goes to Cookie and shares his turmoil. “Mom, this is not me,” he says sadly, begging her to let him to — but to where? When he goes to prison to beg Lucious’ forgiveness, his father quietly asks about whether he still goes to church. When he answers in the affirmative, Lucious seethes back: “Good. You pray to God that he forgives you — because I don’t.” And then suddenly Papa Lyon is flashing back to his own childhood, as his mother sings “Itsy Bitsy Spider” and gets spaced out by the halfway mark — though what her deal is is hard to tell.

At the end of the hour, Andre’s destination remains unknown, but we do have Cookie and Hakeem, sweeping up their warehouse space and envisioning a label called Lyon Dynasty.

Not a bad name for a label — and not a bad nod to the soap opera creator Lee Daniels often references as one of his inspirations.

What did you think of Empire‘s Season 2 Episode 2? Sound off in the comments!