In case you couldn’t tell from the above photo, CBS’ new medical drama Code Black is all about controlled chaos. Angels Memorial Hospital is frantic, intense and overwhelming.

With an influx of patients so great, there often aren’t enough resources to treat them — a situation known as “code black” — there’s no time for hooking up in the on-call room. An attending even tells two bickering docs, “If nobody’s taking their clothes off, I need you both on the floor now.”

Before you chime-in with your thoughts on the anti-Grey’s Anatomy series, here’s a recap of the pilot:

An average ER is in “code black” five times a year, the series’ title card informs us; Angels Memorial hits it 300 times a year. That immediately sets the tone as a batch of first-year residents are greeted by senior nurse Jesse Sallander (played by How to Make It in America‘s Luis Guzman), who calls himself “your mama” because there is nothing that happens at the hospital that he doesn’t know about.

If Jesse is mama, “Daddy” is residency director Dr. Leanne Rorish (Trophy Wife‘s Marcia Gay Harden), who is something of a rebel risk-taker. After an accident three years ago, she became fueled by rage, making her a renegade who has since been investigated four times and has more dropouts than any residency director. She exudes tough love, and no one is more on the receiving end of it than resident/mom Christa Lorenson (Cashmere Mafia‘s Bonnie Somerville). Christa’s younger colleague Mario Savetti (Cult‘s Benjamin Hollingsworth) puts his foot into his mouth more than once on the topic of age. (But those two are totally going to hook up by midseason, right?) 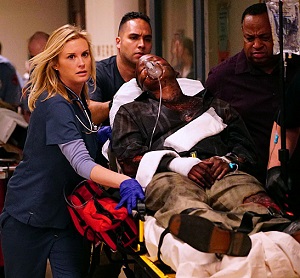 Christa hesitates a lot, but when she decides to step up and ignore orders, Dr. Rorish fires her. However, her instincts about her pregnant patient prove correct: After discovering the woman passed out at home from carbon monoxide poisoning, Christa must perform an emergency C-section in an ambulance while Dr. Rorish instructions her over the phone (while drilling into a patient’s head!). Needless to say, the resident gets her job back.

The heroic save leads to a bonding moment as Christa reveals that she lost her son to cancer, which is why she decided to go into medicine. “Tragedy either softens you or hardens you,” she says. “Who’d you lose?”

As for the other residents, there’s the aforementioned Mario, who used to be a drug addict; quiet but confident Malaya Pineda (The Brink‘s Melanie Kannokada); and Angus Leighton (newcomer Harry M. Ford), a genial guy with a superstar doctor brother and a father who serves on the hospital’s board. Looking for something more exciting than psychiatry, Angus asked his dad to get him into the residency program, but now he’s not sure if he can pass Dr. Rorish’s test. Also overseeing the ER — and occasionally butting heads with Rorish — is the by-the-books Dr. Neal Hudson (Smash‘s Raza Jaffrey).

In the medical storylines department, the pilot had the unfortunate luck of airing after a Grey’s episode that also dealt with cold infusion. On the plus side, guest star Emily Alyn Lind (aka Revenge‘s young Amanda Clarke) is very affecting as the daughter of a brain dead patient whose heart goes to a little girl (just like Amanda got Victoria’s heart?!).

I have long been craving a serious medical drama along the lines of ER during its heyday, and I’m a huge fan of ABC’s docudramas Boston Med, Hopkins, etc. While Code Black isn’t quite up to par yet, the premiere shows a lot of promise with a strong sense of urgency and environment.

Is it sometimes too much? Yes. But who’s to say real-life hospitals aren’t? The true test in the coming episodes will be if the characters can pop beyond just being archetypes. (Toning down lines like, “You’re the doctor they want. I’m the doctor they need,” would help.)

What did you think of Code Black? Grade the pilot via the poll below, then hit the comments to back up your pick! And if you haven’t checked out the Code Black game yet, you can do so here. But be prepared to lose hours of your day on the addictive, unbeatable challenge!