ABC’s The Muppets returned for Round 2 on Tuesday, and while Kermit’s sexy side of bacon Denise was M.I.A., something tells us the Parents Television Council will still find plenty of complain about.

But first, a quick recap: In a desperate attempt to make Miss Piggy slightly more manageable, Kermit set her up with “velvet-throated piano god” Josh Groban, but the plan backfired when he started filling Piggy’s head with all sorts of awful new show ideas. Knowing that Piggy’s true Achilles heel is her extra-large ego, the frog eventually ousted her new man by adding his name (“Josh Groban presents…”) to the title of Piggy’s late night show. See ya, Groban!

Meanwhile, Fozzie spent the half-hour wrestling with his internal guilt after stealing a candy dish from Jay Leno’s house during a party. He almost got away with it, too, until Leno caught him stealing again during a subsequent visit to his house. (Who knew Fozzie was such a little klepto?)

OK, now for what you all came here for: the night’s five naughtiest moments! 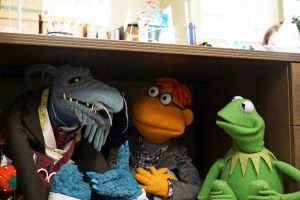 * During Miss Piggy’s initial meltdown about being given fine-tipped Sharpies instead of a standard-sized one, Kermit remarked, “I have a feeling this isn’t about pen thickness.”

* Though it might not qualify as “racy,” Pepe’s comment about Groban giving him the feels (“He’s a handsome man and gender is fluid”) will likely elicit a few “Huh?”s from the kiddos tuning in.

* “For some reason, it’s just so hard to get out of bed these days,” Piggy mused after spending a night with Groban. The Swedish Chef then muttered something about Piggy “groping the Groban,” a statement she deemed “naughty,” but also “accurate.”

* Now for a little drug humor: “Those guys are always happy,” Bobo said about Dr. Teeth and the Electric Mayhem, to which Scooter replied, “Legally now!”

* And then there was Kermit’s “free pass” list, a collection of celebrities he and Piggy were allowed to dot-dot-dot even while they were dating. Lea Thompson was apparently at the top of Kermit’s list, and he nearly got the chance to fulfill his dream, until Gonzo came along and frog-blocked him.

Your thoughts on The Muppets‘ second episode? Drop ’em in a comment below.