As if her scenes in Gotham‘s Season 2 premiere alone did not make this crystal clear, Erin Richards has found that it is oh-so-good to be oh-so-bad.

“This season is so much more fun for me,” the Welsh actress raves of Barbara Kean’s full-on embracing of her wicked side in the wake of her parents’ tragic death and her acrimonious split from fiance Jim Gordon (played by Ben McKenzie). “I’m having loads more to do!”

Was it always Gotham‘s plan for the onetime socialite to head down this path? “I think they either were going to kill me or do this, basically,” Richards ventures. “And we like this! She and Jim were close in terms of they were going to get married, so something needed to happen, for Jim. And I’m glad they went this direction.”

Richards acknowledges that the Fox drama (airing Mondays at 8/7c) took “a pretty swift turn” with Barbara, who in short order segued from a rekindled affair with Major Crimes detective Renee Montoya into a torrid alliance with serial slayer Jason Lennon aka The Ogre (Milo Ventimiglia). “But that darkness that you saw at the end of the first [season] was always in her,” she posits.

What’s more, Richards has herself undergone a similar turnabout, in her own life.

“I haven’t killed my parents,” she says with a(n extremely reassuring) laugh, “but I’ve had an experience where within one year I’ve changed completely as a person, and that had more to do with meditation and all that kind of stuff. So I know that that is possible, in that you can be pretending to be someone — which is totally fine, it’s what everybody does. We’re always told, ‘You should have a husband and a family and a house and a car, blah blah blah,’ and that’s what Barbara was doing. And suddenly Lennon came and showed her, ‘No. You can be totally free. You don’t need those things.’ And that’s how I feel, as Erin. I feel free in the world.”

But whereas Jason Lennon firmly nudged Barbara in this direction, her role in her parents’ brutal murder — coupled with Season 2 newcomer Theo Galavan (James Frain) recruiting her as one of his band of “Maniax” — has cemented her place among Gotham villainy. 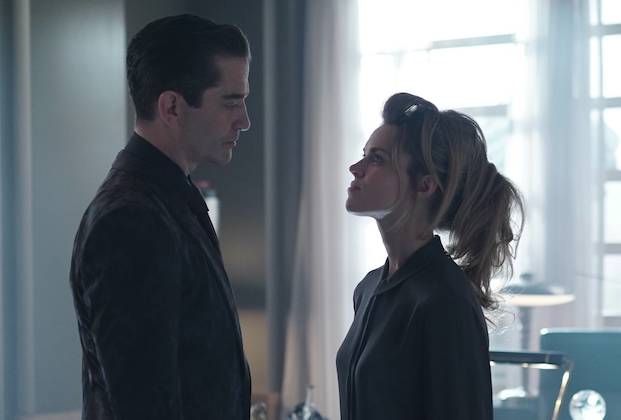 “Once you kill your parents, you cannot go any darker or lower,” the actress notes. “So she just got let out into the world, like, ‘There you go! You can now go and do absolutely anything you want, because you already did the worst thing.'”

Of course, as seen in the season premiere, Barbara — like any proper psychopath — “thinks she’s fine. She’s not crazy!” her portrayer reminds with a smile. “She’s just got some scores to settle. She has ‘issues,’ as she says.” As such, she does believe that she and Jim can be together again some day, some way… in some dark place.

“She definitely loves Jim, and she definitely wants him back. But I think it’s more like she wants to bring him into the darkness of where she is,” says Richards. “She sees who he really is, so she’s kind of angered that he’s playing this ‘role’ [of do-right lawman], like, ‘No, I know who you really are, so I’m going to get you back and we’ll go into this dark place together.”

But how far will Barbara go in the name of that objective? Already, she has threatened rival Lee Thompkins with a violent death, and in this week’s episode she stands idly by as her ex-fiance gets the bloody hell beaten out of him (while even worse fates are visited upon those he works with).

“She doesn’t want Jim dead. Yet,” Richards says. “But as for lines that she won’t cross…. Hmm, I don’t think killing is out of the question!”