Chasing Life fans, now would be a good time to start panicking.

Monday’s season finale ended with April, having been told by her doctors that she’s basically exhausted all treatment options, boldly deciding to live out the rest of her days with dignity, as Beth and Dominic watched helplessly from a distance.

“I remember shooting it, and it made me crazy that she felt like she had nothing else to hold on to,” Italia Ricci tells TVLine of that stunning final scene. “Even though it might not be the right decision in a lot of people’s eyes, it’s the only one that gives her any power. If she were to go back home and continue treatment, she’d be at the mercy of the hospital and the drugs for the rest of her life. She wants to be in control of however much of the rest of her life she has left, which I thought was really interesting.” 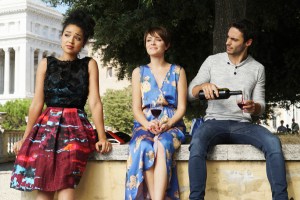 Ricci also notes that April’s “heartbreaking” outlook is representative of how her father handled his own final days, though the connection is “something she doesn’t realize right off the bat when she spirals into this decision.”

And before you go assuming that a third season — ABC Family has yet to renew the series — would present some sort of miracle cure for Ms. Carver, consider Ricci’s words: “I knew that April ends up passing away by the end of [the Mexican series Terminales, upon which Chasing Life is based]. I’m not 100 percent sure, but I feel like that’s probably something we want to maintain. Although, in the original, she beats cancer… then gets hit by a bus and dies.”

As for Beth and Beth Jr. (or Josh Jr.), Ricci notes that “it’s such a nice juxtaposition, bringing a new life into the world while April is trying to figure out how to keep hers going at the same time. April and Beth both have to figure out what to do next. It wasn’t addressed, but I was always curious about how April felt about Beth possibly terminating the pregnancy, considering her own fertility struggles.”

Chasing Life fans, let’s hear your thoughts on the season finale: Do you think Beth will decide to keep the baby? Are you excited by Greer’s return, or just heartbroken over Finn’s choice? And what do you make of April’s bold choice? Grade the episode below, then drop a comment with your full review.