Did The Simpsons just pull the ultimate bait and switch?

Sure, Sunday’s season premiere made good on its promise to split up Homer and Marge — after Homer failed to take his narcolepsy seriously, he and Marge attended marriage counseling, where a therapist suggested they see other people — but the circumstances surrounding said split were suspect at best.

For example, how much of the episode, in which Homer dated a pharmacist named Candace (Lena Dunham) and Marge dated her father, was merely a dream? And for that matter, was the entire half-hour somehow a figment of Girls character Hannah Horvath’s imagination via her inexplicable Simpsons-in-therapy tattoo?

TVLine spoke with executive producer Al Jean about the twist-filled premiere, hoping to get even a few answers to our many, many lingering questions.

TVLINE | There was a lot of hype around this episode. Do you think it lives up to what people made of it?
Well, for all the conjecture about what might happen in this episode, there was always a clue in the title: ‘Every Man’s Dream.’ The title was the first information released months ago, but no one I’ve seen online guessed it would be a dream.

TVLINE | That ending, where it’s all revealed to be Hannah’s tattoo, was insane. What did that mean?
The point of it is that there’s no answer to these problems. People soldier on, but there’s no answer here. And that’s the theme of the show. It’s left a little mysterious, but that’s what we need them to say.

TVLINE | It definitely let me wondering how much of it actually happened.
Well, none of it really happened. [Laughs] What we’re saying is that people try to find a solution to a marriage problem, and some problems have no solution. People stay together despite their flaws. That’s my interpretation; if you have a better one that makes you happier, great.

TVLINE | Why, then, did you feel that this was an important story to tell?
We’re cognitive of the criticism that we’ve done a lot of stories about Homer and Marge having trouble. But anyone who’s been married knows that marriages have rough patches that come and go. I thought this was a great way to play with the form.

Are you satisfied, Simpsons fans? Grade the show’s mind-bending premiere below, then drop a comment with your full review. 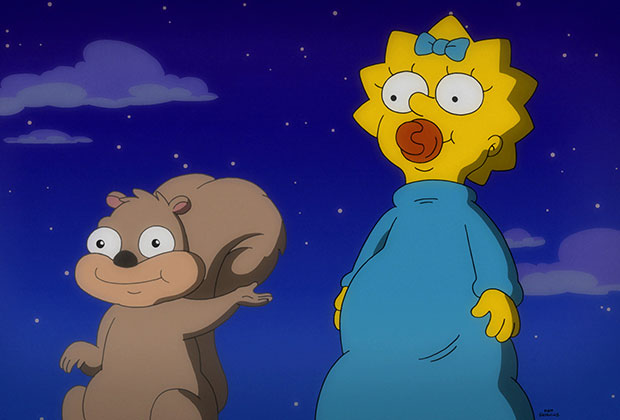