Ray Donovan wrapped its most creatively satisfying season to date Sunday with a three-years-in-the-making moment. In the episode’s closing minutes, Liev Schreiber’s titular fixer at long last opened up about the childhood sexual abuse he suffered at the hands of Father O’Connor (the fact that his sounding board was also a man of the cloth and the setting of his emotional breakthrough was a church heightened the sequence’s potency).

The epic catharsis marked a major turning point for the psychologically tortured character, one that, according to exec producer and new showrunner David Hollander, will lead to an “increased vulnerability” in Ray in Season 4.

Other significant developments in the season-ender: Bridget’s crush/quasi-obsession with Mr. Donellen (Mad Men‘s Aaron Staton) reached a violent (and not entirely unexpected) climax; newly-married Bunchy learned that he was going to be a dad, Mickey finally took a hint and got out of dodge (for good?); and Terry flirted dangerously close with Grim-Reaper territory after being shot.

In the following candid Q&A, Hollander takes us behind the scenes of Schreiber’s stunning tour-de-force, reveals how close Terry came to dying (spoiler alert: really, really close), weighs in on Jon Voight’s future with the show, opens up about the one creative misstep he made in Season 3 (hint: it involves Katie Holmes’ Paige), and responds to my request for a prequel series built around Grace Zabriskie’s late, scene-stealing gangster Mrs. Minassian.

TVLINE | It appeared as if Terry was out of the woods at the end of the episode. Can you confirm that is indeed the case?
That is accurate.

TVLINE | Was there ever a discussion about him actually dying?
There [was] a long and hard and frank discussion about him dying. Up until the writing of the episode, I was in a tumultuous state. Spiritually, Ray needed to have his legs knocked out from under him. I don’t believe in the edict that you have to kill your characters. That’s the stock and trade for a lot of cable shows. Thematically, the show is about… awakenings. And I knew awakenings were going to be the magic realism of this episode. So [ultimately] I felt Terry’s eyes opening were justified by Ray’s actions and the larger story. But it wasn’t until we wrote that draft and Terry’s eyes opened that it felt organic and earned.

TVLINE | Was Eddie Marsan aware of just how close Terry came to dying?
[Laughs] Yes he was.

TVLINE | How did that make him feel?
I think he was both understanding and devastated, and yet curious about the process. And I engaged him in the process.

TVLINE | The Terry/Abby flirtation was one of this season’s big surprises. Do they have genuine feelings for each other? Or are they just two extremely lonely people in desperate need of a connection?
Yes to both. In talking to Eddie this year, he made it clear to me that a lot of his internal monologue was channeling the voice of Terry’s mother — the morality, the center, the judge, the caregiver… So I think Terry was providing comfort and love [to Abby] and that slipped a little toward the lonliness. But it’s not a triangulated love story. Terry is not going to steal Abby from Ray. He will always regret [kissing her]. And, in a way, Terry will perceive what he did as one of the reasons he got shot.

TVLINE | Will that romantic tension continue into Season 4?
The friendship will continue but the flirtation will not.

TVLINE | Let’s talk about Ray’s big breakdown/confessional scene. You directed the episode. What was it like collaborating with Liev on that sequence?
Liev is an extraordinarily gifted actor, and a person who sees the big picture. So he brings this amazing combination of overview and specificity of character. What I knew that I needed and wanted from the scene and how Liev needed to find his way there merged. Liev added the really strong element of, “I need to believe that [Ray is] here to bring a priest to his brother.” And I needed to add, “And yet he [also] needs to tell everything to someone.” That was a script collaboration, because Liev and I have long discussions about every script. On that day, Liev did what a great actor does: He prepared and then let go and trusted the script and trusted us and trusted me. He gave an extraordinary performance. There wasn’t a person on the floor that wasn’t sure that we had something extraordinarily special.

TVLINE | How does his catharsis impact him moving into Season 4?
Increased vulnerability. And some desire to seek some self knowledge. He’s on a journey. He’s facing some very hard questions, and we’re going to challenge him with those questions and see what happens.

TVLINE | For someone running around with a fresh, untreated bullet wound, Ray accomplished a lot in the last 15 minutes of the episode. Is there scientific evidence to support such a mind-over-matter phenomenon?
Depends on where the bullet is. [Laughs] Ray is built of different stock, and I think the audience accepts that. As far as what kind of damage was done, we’ll get into that next season. Terry’s bullet was real. Ray’s bullet was kind of a metaphor. He needed to be in that type of pain and duress to speak the words that were the most important to the show this year, which were, “I did it because I cared for him. And I have pictures in my head that I can’t get rid of.” And it needed to lead to an emotional and physical collapse that would feel organic so that he’s in a place of enormous vulnerability. That was the whole purpose of the season. Every other piece of plot was a mechanism to get us to the ambiguity of that moment. 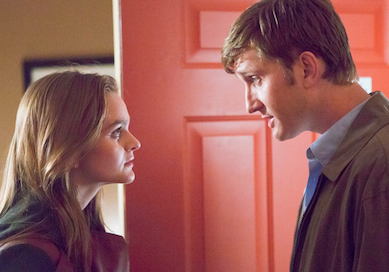 TVLINE | One of the things he did while injured was beat the crap out of Bridget’s teacher/crush Mr. Donellen, even though, in many ways, it was Bridget who was the predator in that situation and Donellen was the victim. Were you trying to make a statement with that relationship?
Absolutely. Ray Donovan has looked at people whole cloth without judgement. [Series creator and former showrunner] Ann Biderman was an extraordinarily generous viewer of people’s flaws and foibles, and has great compassion for what is most broken, and she really set a template along that line. I could never write a character where we were directly vilifying [him or her]. More importantly, Bridget needed a smart person to learn from. She chose an interesting target in Donellen. But she needs an older person. And her father wasn’t going to be that person. And Marvin onvciously couldn’t be that person. She was trying to digest and learn and she got a little crazy. She had her own version of madness.

TVLINE | Bridget reminded him that she turns 18 soon. Was that foreshadowing? Is it possible they could try to make a go of a real, legally-sanctioned relationship next season?
I’m not sure if there’s any more with Donellen himself, but there’s going to be more with her independence and how she pushes that. She walks out the door [at the end of the episode]. And when we meet her again she will be much closer to 18, if not already.

TVLINE | Do you know how much of a time jump there will be between seasons?
I don’t. I have to begin to write the story from exactly where we left off, and know every moment. And then decide when to start. I know where the next season is going in the larger storyline.

TVLINE | I feel like you have your work cut out for you trying to find a way to bring Mickey back into Ray’s orbit. He left California in the finale and, for the first time, essentially has no reason to come back. No one wants to see him again.
[Laughs]

TVLINE | Is Jon Voight still a part of the show?
Absolutely. I laugh only because that’s the easiest part. Mickey always wakes up in a new place, and that place feels permanent until it’s not. Boston. Mexico. North Hollywood. And somehow, some way, whatever he is doing, it’s going to drag him right back into the heart of Donovan land.

TVLINE | It was nice to see Bunchy get a break this season when he met and eventually married Teresa. Why did you feel like it was time to give him a win?
He’s the only Donovan that tells the truth about himself. And there’s a karmic place for people that tell the truth. Everyone else is a con man covering up the pain. Bunchy just speaks it. I didn’t really know where we were going with Bunchy. It was a stroke of luck that a week before we started the writers’ room a friend of mine had been running this new TV show called Lucha Underground, and invited me to come down. And I was watching these female luchadors and it struck me that Bunchy would be really turned on by a dominating comic-book character. And if she had a heart underneath then maybe he could be intimate with her in a way that he had never been before. And then we just dove into that headlong. We just said, “F–k it. We’re going to do this. And we’re not going to f–k it up. We’re going to treat it like an old fashioned love story and see where it lands.”

TVLINE | There have been a lot of deaths on Ray Donovan. Few have upset me more than Grace Zabriskie’s Mrs. Minassian. I loved that character. And I loved watching Grace play her. I’m sorry to see her go.
I’m a huge fan of hers. And we worked together before. When we offered the role to Grace it was one line in one script. She nods at Mickey and she gives him some money. That’s all we had. So I called her and said, “All I know is that you’re up to no good, things are going to get really strange, and then you’re going to die.” And she was really game. She loved Ray Donovan. She came in with crazy, wild ideas. And our costume designer Christopher Lawrence just went to town. And we let Grace run loose. Killing her sucked. I hated killing her. But she had to go. And maybe she’ll be back as another character. She’s a chameleon.

TVLINE | How about a prequel spinoff built around her character?
[Laughs] Exactly. Better Call Mrs. Minassian.

TVLINE | One thing that didn’t quite track for me this season was Ray sleeping with Paige (Katie Holmes). I never got the sense that he was particularly drawn to her — emotionally or sexually.  Why did he follow her up the stairs that night?
That was… one of those flaws in the design that… We knew in the design of the character that that was supposed to happen. I don’t think it was our best move. I think we were in kind of a dynamic place where it needed to happen to trip up other wires. And by the time it happened we began to downplay it, to the point where it was a blip. I wouldn’t disagree with you. Any showrunner makes several mistakes over the course of a long process, and I think I could’ve done better there.